Twenty million-year-old fossil is from a 50-foot marine predator that could swallow two men whole. 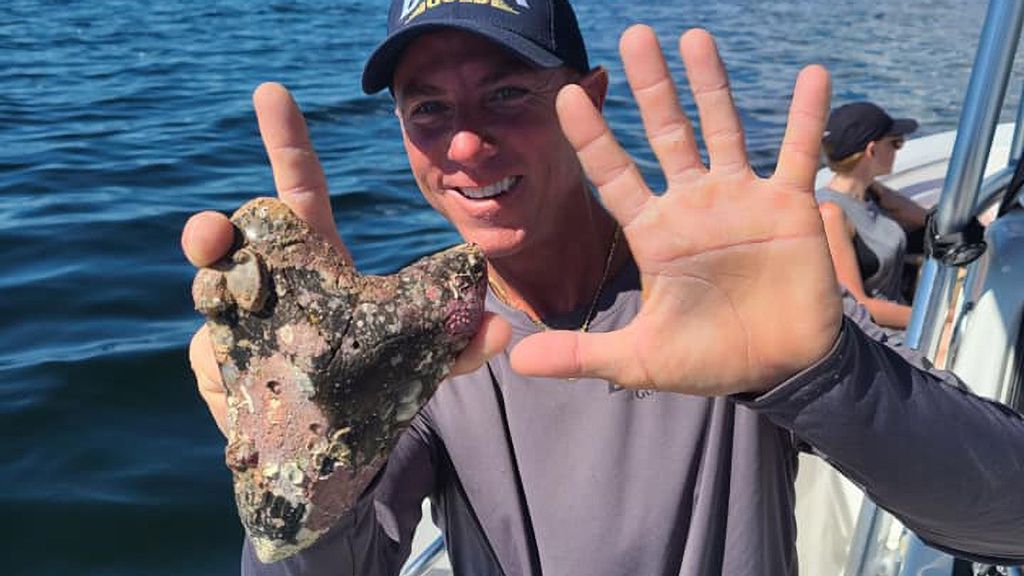 A Florida boat captain has found a 6-inch tooth that belonged to a prehistoric Megalodon shark.

Michael Nastasio, who was diving off the coat of Venice, Florida, when he made the discovery, said, “I can’t take my eyes off of it.”

Megalodon (which means “large tooth”) is a shark species that lived about 23 million to 3.6 million years ago, from the Early Miocene to the Pliocene eras. They were closely related to great white sharks, and are often considered to have been one of the biggest predators on Earth.

Nastasio, who owns Black Gold Fossil Charters, said he found the 6-1/16 inch tooth in an area of the Gulf of Mexico known for the shark teeth found on the local sea bed.

While Nastasio has found many other shark teeth, this one is so impressive, he said, he will keep it.

“I’m so happy right now and literally still shaking,” he posted on Facebook after his discovery.

“I have been fossil hunting for almost 11 years and running my own charter now for a little over a year,” he said. “I have found thousands of megalodon shark teeth and other various fossils.

Megalodon “was not only the biggest shark in the world, but one of the largest fish ever to exist. Estimates suggest it grew to between 15 and 18 meters [49–59 feet] in length, three times longer than the largest recorded great white shark,” according to London’s Natural History Museum.

A complete megalodon skeleton has never been recovered, and the museum says these figures are based on the size of the animal’s teeth, which can reach 7 inches [18 centimeters] long.

The megalodon’s massive, serrated teeth indicate it was a meat eater, and would have preyed on large fish, dolphins, whales and even other sharks, according to the museum.

“In order to tackle prey as large as whales, megalodon had to be able to open its mouth wide. It is estimated that its jaw would span 2.7 by 3.4 meters [9–11 feet] wide, easily big enough to swallow two adult people side-by-side,” the museum’s website says.

“These jaws were lined with 276 teeth, and studies reconstructing the shark’s bite force suggest that it may have been one of the most powerful predators ever to have existed.”