What Next For The Dead Sea?

This unique salt lake is shrinking at an alarming rate. Can it survive? 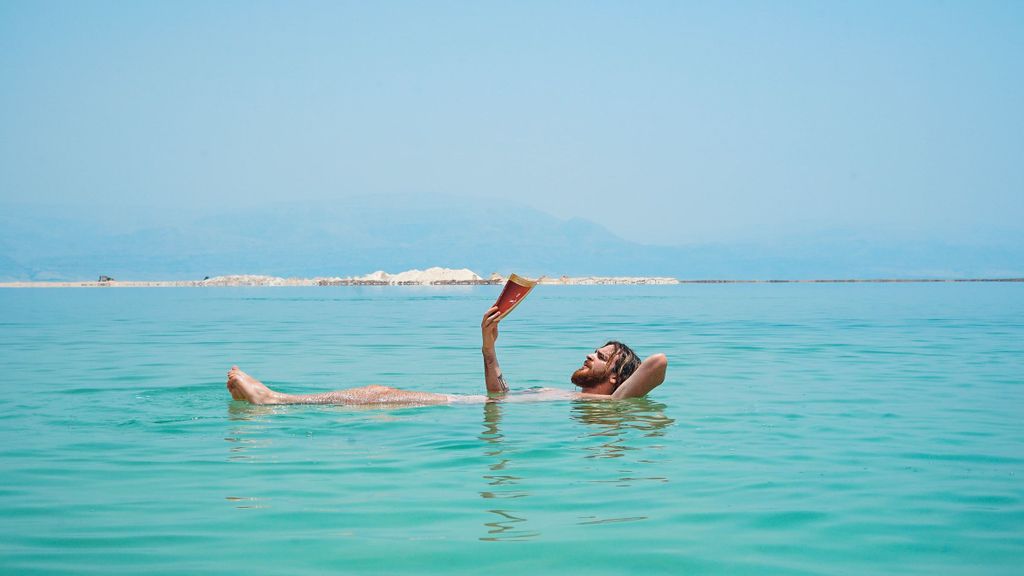 The Dead Sea has been losing more than some 40 inches of water per year since the 1970s, according to EcoPeace Middle East. Yet experts say the sea will not disappear. (Toa Heftiba/Unsplash)

Hundreds of people undressed for a nude photo shoot last week to bring attention to the Dead Sea, a unique body of water bordered by Israel and Jordan at the lowest point on Earth — 1,380 feet below sea level.

The Dead Sea (Salt Sea in Hebrew) is the deepest hypersaline lake in the world, 27 times denser than Utah’s Great Salt Lake.

Tourists and Israelis alike love bobbing in the mineral-rich water, slathering on its healing mud and using cosmetics made from its extracts. The water and even the ambient air have proven health benefits for everything from asthma to psoriasis.

The problem is that the Dead Sea has been shrinking at an alarming pace, losing more than a meter (some 40 inches) of water per year for a total of 25 meters since the 1970s, according to EcoPeace Middle East. Giant sinkholes have swallowed up several beaches.

The photo shoot by the Dead Sea Revival Project was intended to spur action and celebrate the opening of a virtual Dead Sea Museum meant as a forerunner to an actual museum in nearby Arad.

Several experts talked about the Dead Sea’s troubles and what can be done to ensure the beloved lake won’t disappear.

Some of their answers may surprise you. Spoiler alert: The Dead Sea surely is shrinking, but it is not dying.

First here are the problems and the proposed solutions, followed by experts’ predictions about the future of the Dead Sea.

Why is the Dead Sea shrinking?

“The main problem is a lack of freshwater coming into the Dead Sea, in which natural evaporation is strong,” said Isaac Gertman, a senior researcher at the National Institute of Oceanography at the Israel Oceanographic and Limnological Research in Haifa.

This happened because the landlocked Dead Sea primarily depends on the lower Jordan River, which in turn depends on the Sea of Galilee (Lake Kinneret), to get replenished. Much of this freshwater has been diverted to provide for drinking, farming and industry in Israel and Jordan.

About 700 million cubic meters of water would be needed to restore the sea level to where it was in 1900, said Gertman, who has studied the Dead Sea since 1994.

A lesser factor is the mineral-extraction industries in Israel and Jordan.

Gidon Baer, former coordinator for Dead Sea studies at the Geological Survey of Israel, said sinkholes form due to cavities developing underground because fresh groundwater from the Judean mountains is dissolving a salt layer deposited in the Dead Sea about 10,000 years ago.

That salt layer now sits 10 meters to 15 meters below the surface at the shoreline, covered by newer sediments.

“Until the 1980s, this salt layer was soaked with salty water that infiltrated from the DeadSea. But as the Dead Sea water level drops, the interface between the salty subsurface water and the fresh groundwater dropped as well, and the salt layer encountered freshwater, which led to the dissolution,” said Baer.

Eventually the cavities collapse and form sinkholes. Flash floods in the winter drain directly into the subsurface salt layer of the sinkhole, dissolving it much more quickly than when fresh groundwater reaches the sinkhole.

“We expect that in the coming 20 to 30 years, the fresh groundwater level will become lower than the salt layer, so the only freshwater that will reach the salt layer will be from flash floods. We are now studying the effect this will have,” said Baer.

The Geological Survey set up a sinkhole early-warning system monitored with satellite- and airborne-based measurements.

“Sometimes we can predict the collapse five years ahead, sometimes two weeks ahead. We mark all places where we see it happening and share that information with road authorities and other planning authorities so they can mitigate the consequences.”

This system forecasted the sinkhole that formed along the main road north of Ein Gedi in 2015, about three years in advance. That gave local authorities time to build a bypass road and close the main road, avoiding a disaster.

Gertman said that one idea was to connect the Dead and Mediterranean seas, sending runoff from the Med to the Dead and building power plants along the way. But this is not feasible economically or logistically.

About 10 years ago, another idea was floated: Building a channel from the Red Sea in Eilat to the Dead Sea, bringing desalinated water mainly to Jordan and sending the end desal product, brine, to the Dead Sea. The addition of brine could slow the rate of decrease in water level and thereby postpone the development of related problems.

However, it’s doubtful the project will go forward due to economic and political considerations.

“It would be very expensive and difficult to build. The World Bank agreed to give some money to study this project and to build it, but it’s still at the idea stage because we need close cooperation with Jordan to make it happen,” said Gertman. “It’s easy to talk about but hard to do.”

Many Israeli scientists agree with Gertman that it may be better to build desal plants on the northern Mediterranean coast that would replenish the Kinneret with freshwater and at least partially restore the natural flow from the Kinneret to the Jordan to the Dead Sea.

Clive Lipchin, director of the Arava Institute for Environmental Studies’ Center for Transboundary Water Management, believes the Dead Sea could never again be adequately fed by the Jordan River because the water is needed by people on both sides of the border.

“This is a water-scarce region. Even with 100 more desalination plants, freshwater will always be the most sought-after resource,” he said.

The Arava Institute strives to build cooperation in the region to solve water-related issues.

“It’s critical to understand that any potential solution has to have collaborative foundations. You need regional cooperation, and that is our best and most valuable role,” Lipchin said.

“We have strong partnerships in Jordan and the Palestinian Authority. But the reason nothing is moving forward to save the Dead Sea is a lack of such cooperation at the governmental level. Israel and Jordan signed agreements on Red-Dead 10 years ago but until the governments get their act together nothing will happen.”

The future of the Dead Sea

Contrary to popular belief, research indicates that the Dead Sea will never dry up entirely, said Gidon Baer of the Geological Survey of Israel.

“The rate at which the level is dropping will lessen and eventually it will stabilize. The Dead Sea will not disappear,” he said..

This is because the rate of evaporation declines as salinity increases. “Eventually, the rate of loss will equal the rate of inflow of water,” Baer said.

The consequences of the shrinkage will continue causing economic and environmental impacts, not all of them bad.

“When the water level drops it exposes new land at the shoreline, more salt is deposited and sinkholes form,” he said. “These features have both negative and positive aspects.”

For tourists, one negative result is that the sinkholes have destroyed several Dead Sea beaches and make it difficult to reach the waterline of surviving beaches. This could be managed by finding or building alternative routes, Baer said.

On the other hand, tourism could benefit from the situation.

“The features exposed have never been seen before, and the beauty of the Dead Sea is even enhanced,” said Baer.

“Before the 1980s, salt wasn’t deposited along the shoreline in such variety and quantity, and now you see it both on the shoreline and in the water. People can take advantage of that by bringing tourists to see those features.”

Israel could, for example, build a safe trail around the sinkholes for tourists.

Another advantage of the newly exposed features is the opportunity for scientific study that could shed light on similar places in the world.

Living with the problems

At least for now, with no sure solution in sight for the Dead Sea’s woes, we may have to view the situation the way we are starting to view the Covid pandemic: learn to live with it.

That’s the opinion of Jiwchar Ganor, a professor of Earth and environmental sciences at Ben-Gurion University of the Negev, and former dean of the Faculty of Natural Sciences.

“The decrease in sea level is of course human caused, but people need to drink and eat,” he said. “There is a huge population in Israel, Jordan, Lebanon and Syria. These areas are starving for water. They use all the available water, and the result is a drop in the Dead Sea level.”

Ganor said the net effect of the mineral-mining industry is more salinity. It’s not possible to stabilize both the salinity and the water level.

“We can stop the sea-level drop by adding seawater or desalination brine, but if we do that, we will make the surface water much less salty on the top and this will cause more sinkholes,” he said.

“We can stabilize the salinity, but if we do that the water level will go down. All we can do is slow the rate of decrease by adding a limited amount of water from the brine of desalination in the Gulf of Eilat.”

The reality, said Ganor, is that the problems cannot be solved completely.

“We have a huge need for freshwater. And we have an industry that is a very important source of foreign currency for Jordan, and for Israel is the major employer in the south.”

However, he agrees with Baer that the salty lake will be with us forever.

“The Dead Sea will shrink but not disappear,” he said.