It took fire crews and divers about three hours to retrieve the luxury car from the water. 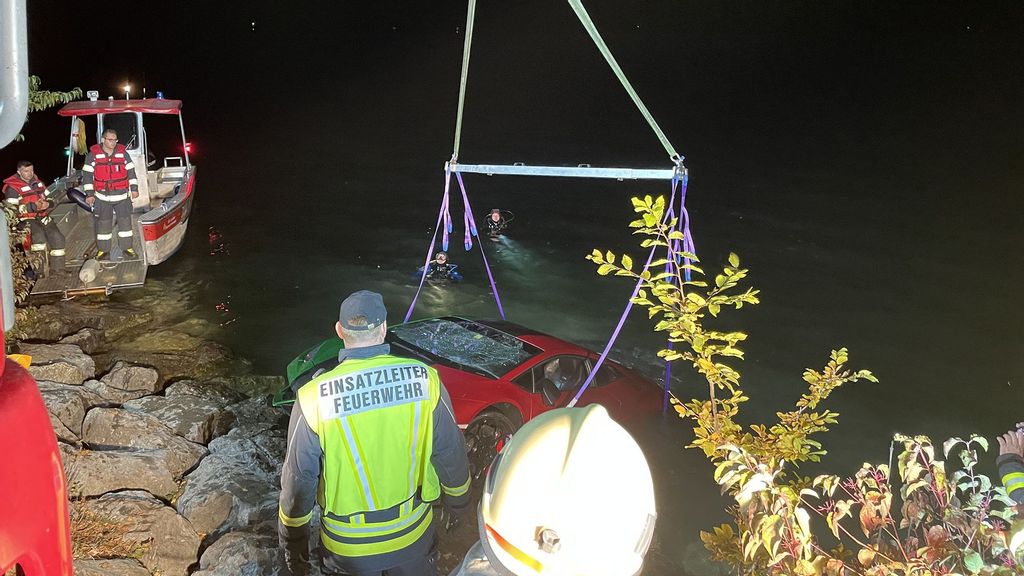 The driver of this Lamborghini apparently mixed up the gas and brake pedals and the luxury sports car ended up in Mondsee Lake in Austria on Oct. 19. (AFKDO Mondsee, C. Stoxreiter/Zenger)

A luxury Lamborghini ended up in a lake after the Swiss driver apparently mixed up the accelerator and the brake pedals while putting the car into reverse.

The driver, whose name was not reported, was trying to reverse the luxury supercar when he accidentally drove it into Mondsee Lake in Austria on Oct. 19.

Austrian police said the driver was traveling from Mondsee toward Unterach am Attersee with a friend when the accident occurred. The passenger got out of the car while the driver attempted to exit a parking lot that backed onto Mondsee Lake.

“He must have mixed up the brake and accelerator pedals and drove backwards into the Mondsee,” police said. “The vehicle sank about 15 meters [49 feet] from the bank to a depth of about 5 meters [16 feet].

“The driver was able to free himself from the vehicle and swim to the bank,” police said.

The driver reportedly mixed up his pedals. Instead of pressing the brake, he hit the accelerator and sent the Lamborghini backward into the lake.

The extent of the damage to the vehicle is not yet clear.

Bernhard Strobl, from the Innerschwand Fire Brigade, said: “A lot of care was required to recover the valuable sports car, but together with five fire service divers, a recovery balloon and a crane truck, my team managed to carefully pull the vehicle out of the lake.”

The recovery took about three hours and involved 31 members of the Mondsee and Innerschwand fire brigades, the fire department said.

The driver was taken to hospital and treated for minor injuries.

The price of a Lamborghini, the Italian luxury vehicle, can start anywhere from $200,000 to $500,000, depending on the model, according to dealerships.

“The history of ‘Lamborghini Automobili’ officially starts in 1963,” according to lamborghini.com. “Nevertheless, we must consider the far-off roots of this event, and they are the roots of Ferruccio Lamborghini. Born in 1916, this capable, impetuous, strong-willed Taurus was the leading character in the foundation of the company and the early phases of its extraordinary history.

“By the time he decided to build a factory of luxury sports cars, Ferruccio was already a very wealthy man. In the period following World War II, he founded his tractor factory, which he launched with energy and determination, creating a major point of reference in this industry. Other businesses followed, and he amassed his fortune at the perfect time, before his 50th birthday.

“By the early ’60s, Lamborghini was a powerful and successful man who knew exactly what he wanted, but when he said he would build a super sports car to compete with Ferrari, many people thought he was mad.”

«Previous Post
What Next For The Dead Sea?»Next Post
VIDEO: Atlanta Cop Hit By Car While Investigating Roadside Accident