Though the war games took place in open waters, Japan’s government kept a wary eye on the maritime drills. 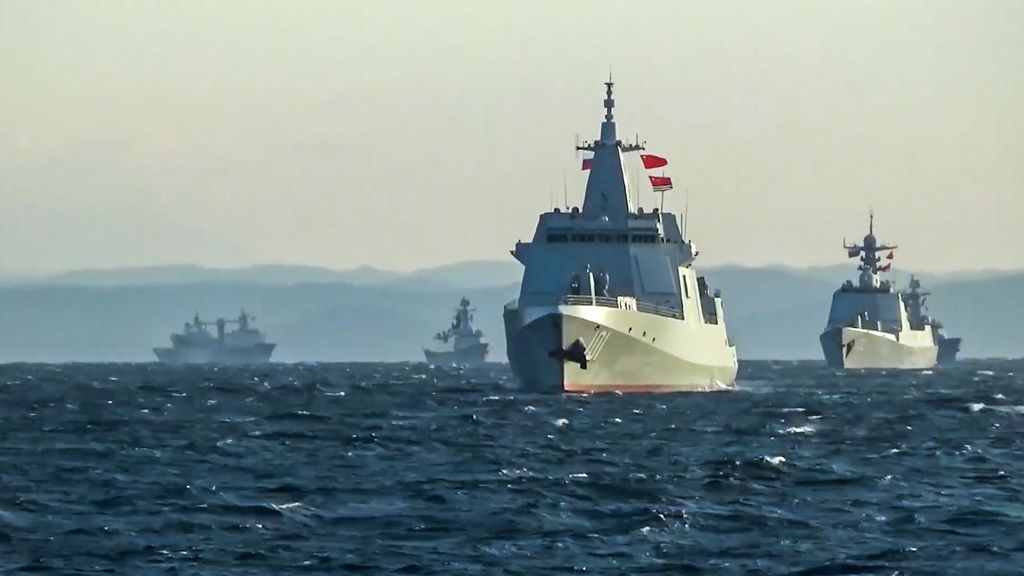 Ships from the Russian and Chinese navies take part in a procession through a strait in the Sea of Japan on the final day of the Maritime Interaction 2021 war games. (Ministry of Defense of the Russian Federation/Zenger)

Ten Chinese and Russian naval vessels sailed through a strait in the Sea of Japan, a visual demonstration that relations between the two superpowers continue to grow.

The ships’ procession, on Oct. 17, marked the conclusion of annual the Russian-Chinese “Maritime Interaction-2021” war games.

During the three-day exercises, sailors from both countries performed more than 20 different combat exercises, practiced tactical maneuvering and communications during the training missions, the Ministry of Defense of the Russian Federation said in a statement.

During the practical stages of the exercise in the naval training grounds, servicemen worked out the tasks of mine defense with the execution of artillery fire at mock-ups of floating mines.

The training exercises got the attention of Japan’s government, as the participating vessels sailed directly through a strait that separates mainland Japan from the northern island of Hokkaido.

“The government is closely watching Chinese and Russian naval activities around Japan, such as this one, with high interest,” said Yoshihiko Isozaki, Japan’s deputy chief cabinet secretary. “We will continue to do our utmost in our surveillance activity in waters and airspace around Japan.”

Although the strait is considered to be international waters, meaning no laws were broken by China or Russia, the region is often a source of tensions between Beijing, Tokyo and Moscow.

Japan and China have claims over small islands in the East China Sea that are often the focus of maritime tensions, while the Japanese have similar disagreements with Moscow over various territories in the region.

The latest military exercises reflect Moscow and Beijing warming to one another recently, as both countries have seen relations with the West turn increasingly sour.

Russia and China have strengthened their military relationship over the last decade based not on common goals but on common fears, said a 2020 report from the Warsaw Institute, a Poland-based think-tank focused on geopolitics.

The institute’s report, titled “Russia-China: A Limited Liability Military Alliance,” said that the Kremlin is particularly interested in allying with the world’s emerging superpower, as its ailing economy and position on the world stage is increasingly eclipsed by the U.S. and its allies.

The think-tank also said that the two countries have never been as close as they are today since they signed their “Treaty of Friendship” in 2001.

The training exercise by Russia and Japan is typically an annual event, although it was canceled in 2020 due to the COVID-19 pandemic. The first Russian-Chinese joint naval drills took place in the Yellow Sea in August 2005, the Russian Ministry of Defense said.