Garbage Collection, Eco-Awareness Is A Way Of Life In Mexico City

Some make a living by separating garbage and selling it to recycling centers.
By Andrés Vargas Reynoso October 20, 2021
Facebook
Twitter
Linkedin
Email 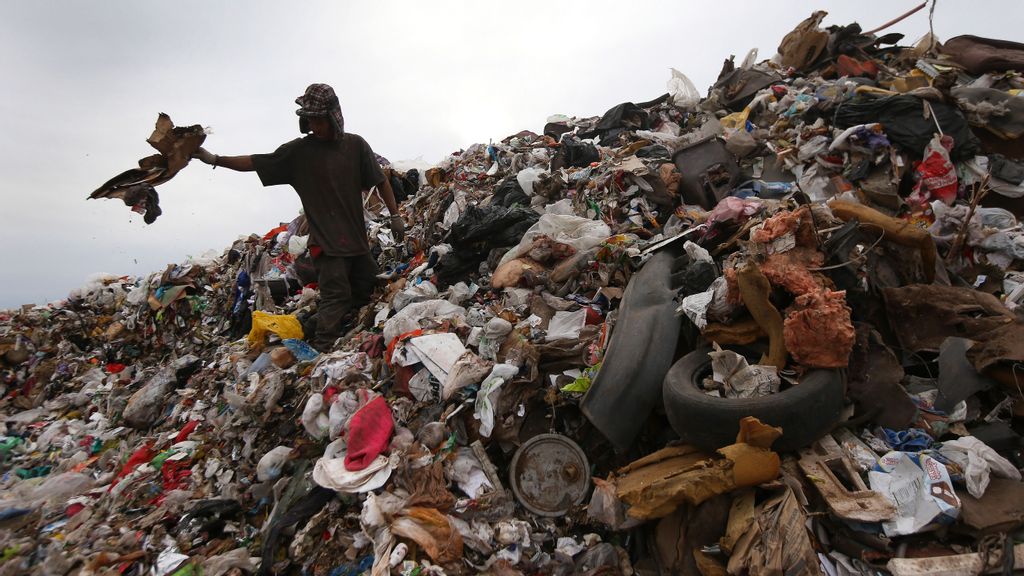 In Mexico, some people make a living by separating garbage and recyclable materials, which can be sold. (John Moore/Getty Images/Stock)

MEXICO CITY, Mexico — When we throw away household products, we rarely ask what happens to them.

What some see as garbage, others see as a way to make a living.

José Luis Linares has been working for more than 20 years with the garbage that people throw away. Linares is an older man who works as a volunteer with the Mexico City Cleanup Service, part of the Ministry of Public Works and Services.

Many people in Mexico go house to house, picking up garbage, separating it and selling what they can to recycling centers to lessen environmental impact.

“Some of us go house to house collecting garbage, and we have a better standard of living than, say, a taxi driver. But we work hard and spend hours separating garbage, and we know where to sell the cardboard, wood, metal and clothes that sometimes people give as a kind of tip,” he said.

He said that, as a volunteer, he does not always get along well with the garbage collectors in the large trucks the government sends.

“Sometimes there are money issues, and that affects the people who give us their garbage. For example, if a homeowner wants to get rid of a couch, we have to ask for extra money to take it, because we push a cart with two cans, and it’s hard to transport that,” he said.

“We give the couch to the truck [employees], who ask us for, say, 3 dollars to move it, and we have to ask the homeowner for 4 dollars, so we can earn something, because that’s how we make a living.”

He says a couch has material that can be sold, like wood, wires and cloth, if it is in good shape. “So the earnings are not so fair anymore,” said Linares.

A bulletin published by the National University’s (UNAM) Social Communications Department notes that in 2017, there were close to 8,322 volunteer garbage collectors. Together, they cover almost seven miles a day on foot in Mexico City.

Unlike what was said at the end of the 20th century, when people talked about a garbage “mafia,” today there is a difference, said Ulises González Miranda, an environmental engineer from the UNAM.

“That perception is slowly changing. We’re seeing more and more projects on different platforms and websites that promote the recovery of recyclable material and getting the citizens who produce waste involved,” he said.

Beyond the relationship between the people who work with garbage when it leaves homes, he said there is still “a lot of disinformation about the logistics of handling [garbage], the health and environmental effects of waste production and a correct or incorrect handling of it.”

Because of this disinformation, there is an unequal treatment of garbage in Mexico City, said González Miranda.

“It is different, depending on the area’s infrastructure. In Mexico City, we see neighborhoods where people hand over their garbage separated as it should be, and the organic [waste] is not in a bag. But at the same time, in some places, cans of insecticides or fertilizer are thrown into rivers and canals, polluting the water and ground. There are also places where people burn garbage because there is no collection. There is still a lot to be done in treating waste,” he said.

Ecological awareness, lessons from kids for their parents

González Miranda says that to change citizen mentality, it is important to offer more environmental education to children. They, in turn, can create awareness in their parents and the message can be more impactful.

“We must invest in awareness campaigns beyond what companies do as part of their marketing strategy (greenwashing). For example, both citizens and large garbage producers should be charged for their waste. Then, we would be much more careful, more responsible and less wasteful,” he said.

Another important point is to separate waste correctly.

“In Mexico, some materials are separated well, like PET [polyethylene terephthalate] or metals, although metals can lead to vandalism, such as the theft of pipes or copper or drain covers. But we still need to do more in separating organic waste and materials, such as building debris, tires, electronics. It’s important to ask ourselves where everything we throw away ends up,” he said.

Saúl Moreno has been a garbage collector for about eight years, a job he inherited from his father.

“My dad made a living this way. There are good days and bad days, but the important thing is to keep working,” he said.

Moreno says there are many steps in the work.

“The first and most important step is for people to separate the garbage at home and give it to us like that. But there is also a need for more factories [garbage treatment facilities] so that everything takes less time,” he said.

As regards issues between house-to-house collectors and the garbage-truck employees, Moreno says it depends on attitude.

“It’s a work relationship like any other. I get along with everyone and do my job the best I can, so I won’t have problems,” he said.

He talked about the myth that garbage is gold to many people.

“We don’t get a salary for this work; we’re volunteers. What you earn depends on how much effort you put into it. In other words, you can make a good living, but it depends on how and how much you want to work.

“If we do well one day, great, and if not, oh well. Tomorrow will be another day, and there is always going to be garbage,” he said.