Reclassification from endangered to threatened could give humpback chub a lot more breathing space. 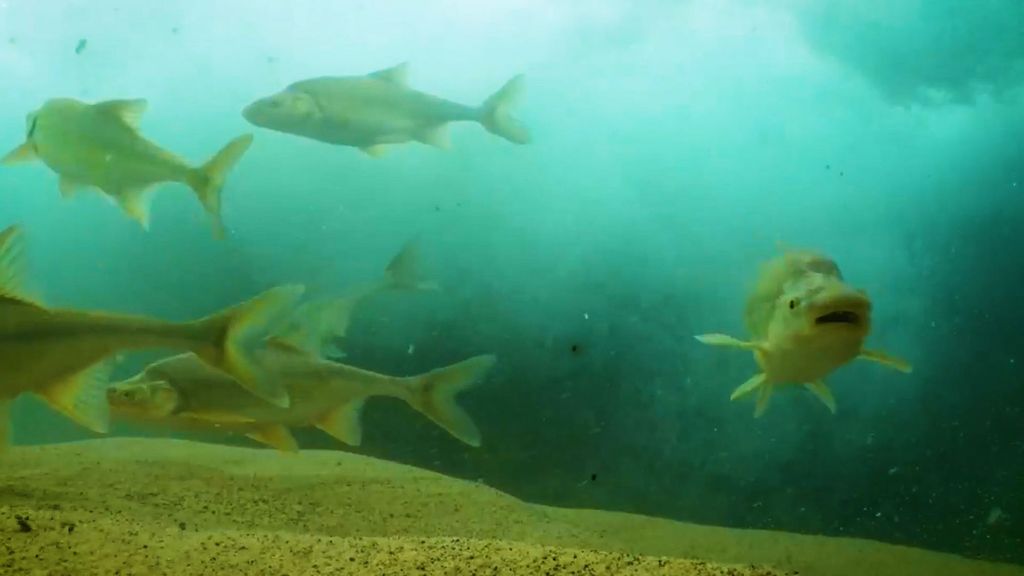 Humpback chubs swimming underwater, seen in this screenshot from a video, in the Colorado River in the Grand Canyon in Arizona in the United States. (USFWS/Freshwaters Illustrated/Zenger)

With a hard-to-miss hump behind its head and a colorful appearance — olive back, silver sides, white belly — the humpback chub would stand out in any waters. Now, it’s getting a significant upgrade in the world of species conservation: being reclassified from “endangered” to “threatened” under the U.S. Endangered Species Act.

“Today’s action is the result of the collaborative conservation that is needed to ensure the recovery of listed species,” said Matt Hogan, acting Mountain-Prairie region director for the U.S. Fish and Wildlife Service.

“Reclassifying this distinctive fish from endangered to threatened is the result of many years of cooperative work by conservation partners in the Upper Colorado River Endangered Fish Recovery Program and the Glen Canyon Dam Adaptive Management Program. We thank everyone involved for their efforts as we look toward addressing the remaining challenges in the Colorado River Basin.”

As the fish’s habitat was altered and sometimes destroyed during dam construction, its existence became more at risk. The humpback chub was on the original list of endangered species in 1967.

“This fish is uniquely adapted to live in the swift and turbulent whitewater found in the river’s canyon-bound areas. The fleshy hump behind its head, which gives the fish its name, evolved to make it harder to be eaten by predators, and its large, curved fins allow the humpback chub to maintain its position in the swiftly moving current,” the Fish and Wildlife Service said in the statement.

The Upper Basin Recovery Program’s actions over the last 15 years have improved river flow conditions, to the point that all Upper Basin populations have stabilized or increased, according to the statement.

It warns that the reclassification is simply a sign of improvement and that the threat remains for the humpback chub.

Under the guidelines, a “threatened species is likely to become endangered within the foreseeable future” unless more efforts are made to protect it.

“Ongoing threats to the humpback chub that Recovery Program partners are addressing include threats from non-native species such as smallmouth bass in the upper basin, uncertainties related to river flow and the outcomes of a new cooperative agreement among partners in the Upper Basin Recovery Program,” the U.S. Fish and Wildlife Service said.