Cops ram car and arrest driver who had been performing “doughnuts” nearby. 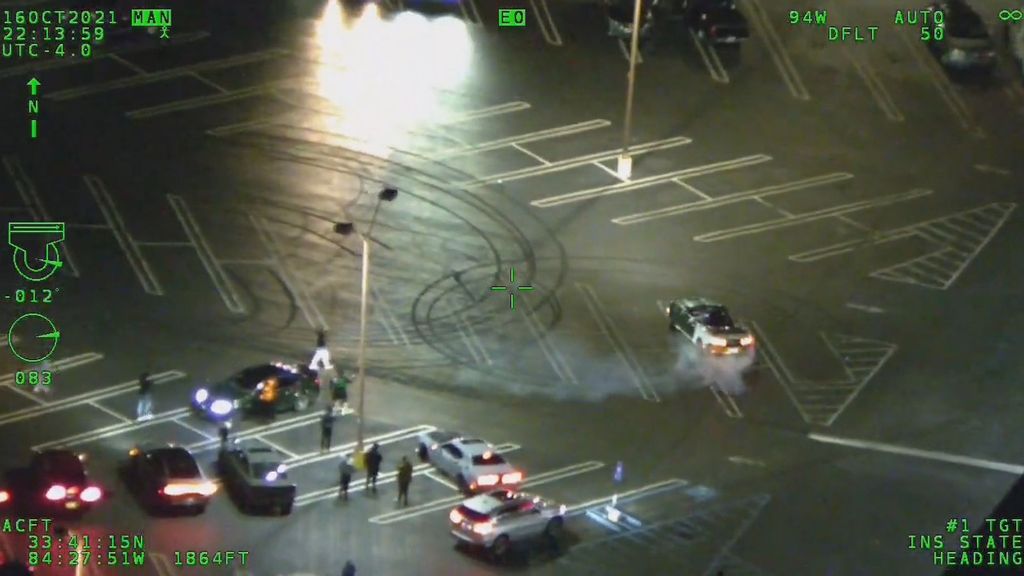 A driver is seen performing “doughnuts” in the parking lot of an Atlanta shopping center shortly before police arrive on the scene. (Atlanta Police Department/Zenger)

Showing off for your buddies by doing doughnuts in your car in a public parking lot is a no-no, as a driver in Atlanta found out this past weekend.

The driver, whose identity has not yet been disclosed, was caught in video taken from a police helicopter smoking his tires and steering his car in circles — aka “doing doughnuts” — in a shopping center parking lot in Atlanta. When patrol cars arrive on the scene, the driver tries to flee, but is apprehended following a brief chase that included him driving on the sidewalks in front of several closed stores.

No one was injured in the melee, which took place at about 10:15 p.m. on Saturday, and it is not yet known what charges the street racer will face.

The episode starts with footage showing the suspected street racer performing tire-smoking circles in a parking lot, surrounded by spectators in their cars. As the video unfolds, an officer can be heard saying that the driver is performing “doughnuts.”

Then, as the first police car enters the scene, other suspected street racers who were watching the display can be seen running toward their vehicles and leaving in a hurry.  The police car appears to attempt to ram the drifting vehicle.

As the street racer attempts to flee, other police cars are seen entering the frame, with the suspect finally being apprehended when several police cars prevent him from fleeing the scene.

“This weekend, entry-level street racers quickly learned that their antics would cost them in citations, impounds and arrests,” the Atlanta Police Department said in a statement accompanying the video. “The Atlanta Police Department joined its law enforcement partners, the Georgia State Patrol, Motor Carrier Compliance Division, and others to curtail the dangerous driving activity which shuts down our streets and disrupts our neighborhoods.

“With ground units fully engaged, our Aviation Unit went to work tracking, providing intel and filming the activities of the lawbreakers on the ground. This clip … gives a glimpse of the teamwork.”

The busts are part of Atlanta authorities’ ongoing crime-suppression efforts, which they described as both wide-ranging and focused.

“Our goal is to disrupt all criminal activity and significantly reduce violent crime. Collaborating with our law enforcement partners enables our response to be far-reaching and impactful.

“If you come to Atlanta to commit crimes of any type, expect that we will find you, arrest you and hold you accountable. We suggest you bring impound and bail money if you come to our city with criminal intent. We also remind the public that your tips and calls matter.”

An arrest in a similar case was made the same day a half a world away, when a driver in Australia was caught on video doing “doughnuts” on the streets in a sports car. The 39-year-old driver in this case faces counts of dangerous operation of a vehicle and willful damage, Queensland police said.

«Previous Post
Baring It All For The Sake Of The Dead Sea»Next Post
VIDEO: Yacht A Snorty Boy: Sail Boat Skipper Seized With 6 Tons Of Cocaine On Board