VIDEO: Horror As Car Crushes Baby In Stroller On Sidewalk

Vehicle was rammed by another car, jumped the curb and hit the 18-month-old boy and a nearby pedestrian. 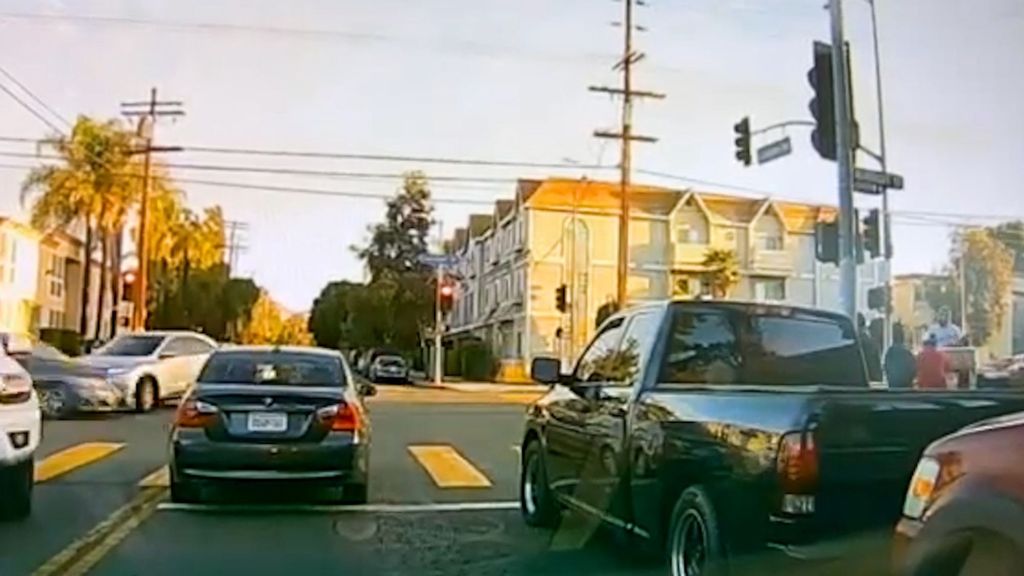 A Honda HRV that was hit by another vehicle, jumped the curb and landed on the sidewalk, killing a toddler in a stroller and injuring a nearby pedestrian, in the North Hills area of Los Angeles, California, on Oct. 17. (Los Angeles Police Department/Zenger)

A hit-and-run collision in Los Angeles killed an 18-month-old boy who was in his stroller on the sidewalk on Oct. 17.

Video shows the two vehicles colliding at an intersection, and then one jumps the curb. The child and an unidentified pedestrian are hit. The child, whose identity was not released by police, died at the hospital. The conditon of the other person was not reported.

“The Los Angeles Fire Department paramedics arrived at the scene and transported the victims to a local hospital. One of the victims was treated and released, but the child succumbed to his injuries and died. The name of the child will not be released until next-of-kin has been notified,” police said.

“The approaching vehicle was a grey colored sedan, 4-door, possibly a Toyota Camry. Due to the nature of the impact, the Honda HRV changed its direction and began heading towards the southeast corner that was populated by several pedestrians. The Honda HRV drove onto the sidewalk colliding with some of the pedestrians. One of the pedestrians was a one-and-a-half-year-old child who was in a stroller.

“The Honda HRV pinned the stroller and victim against a brick planter. The driver of the grey colored sedan continued to drive eastbound Nordhoff Street without stopping, identifying themselves, or attempting to render aid,” police said in their statement accompanying video of the incident.”

The short video shows the moment the Honda is knocked off course by the crash and ends up jumping the curb and landing on the sidewalk.

At the time of the posting on YouTube, police were searching for the driver of the car that took off.

“On April 15, 2015, the City Council amended the Los Angeles Administrative Code and created a Hit and Run Reward Program Trust Fund. A reward of up to $50,000 is available to community members who provide information leading to the offender’s identification, apprehension, and conviction or resolution through a civil compromise,” police said.

“Drivers are reminded that if they are involved in a traffic collision, they should pull over and stop as soon as it is safe to do so, notify emergency services, and remain at the scene to identify themselves.”