The 20-day eruption of the Kilauea volcano in Hawaii is still flowing. 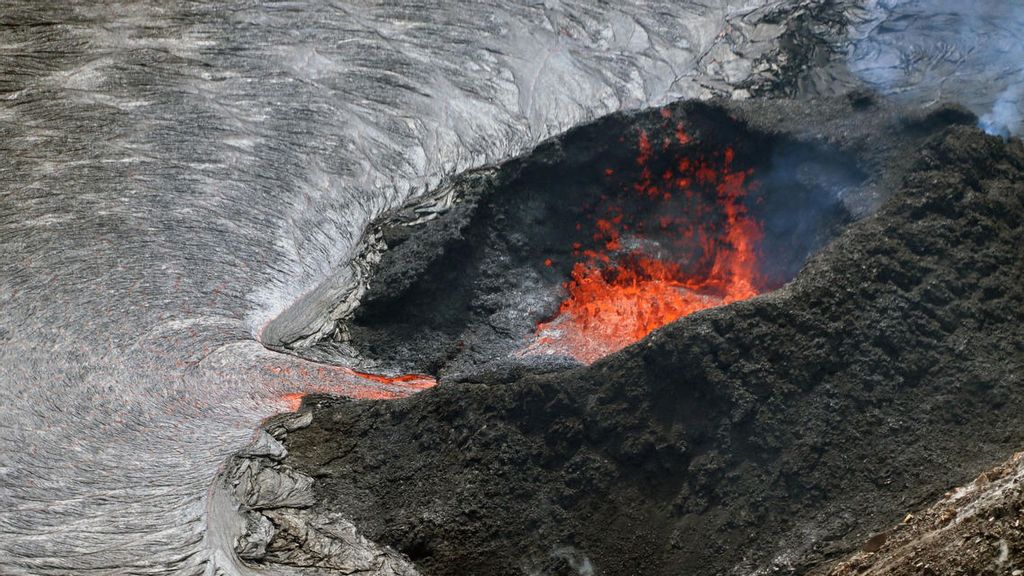 Fountaining activity on Sunday, October 17, at the west vent in Halema‘uma‘u crater, at the summit of Kīlauea. (USGS, M. Patrick./Zenger)

Lava flow appears to be slowing at the Kīlauea volcano in Hawaii as the latest eruption approaches its fourth week, though earthquake risks remain.

Kīlauea is one of the most active volcanoes on Earth, according to the U.S. Geological Survey. The current eruption began on Sept. 29.

Commenting on the video, the agency said: “A morning overflight of Kīlauea summit on October 15, 2021, provided aerial views of the eruption within Halema‘uma‘u. Lava erupts from a single vent on the western wall of the crater. The vent has a spatter cone around it, with an opening to the east from which lava flows into the lava lake.”

The government website said earthquake hazards occur regularly in Hawaii. “Frequent and long-lasting eruptions and recurrent strong earthquakes in Hawai‘i create a unique combination of natural hazards for people across the Hawaiian Islands.”

They erupt from a volcano’s summit or along rift zones on its flanks. Lava flows travel down slope toward the ocean, burying everything in its path.

When lava flows enter the ocean, it can build new land, called lava deltas, that are prone to sudden collapse. That collapse can trigger explosive activity that hurls hot rocks hundreds of yards inland and/or seaward, according to the U.S. Geological Survey.

Kīlauea is a highly active shield volcano — so called because its lava flows have broad sloping sides, and it’s generally surrounded by sloping hills in a pattern that looks like a warrior’s shield.

Believed to be between 210,000 and 280,000 years old, the volcano emerged from the sea about 100,000 years ago. Kilauea is located on Hawai’i, the official name of the largest island in the archipelago, also called the Big Island. (It should not be confused with Hawaii, the state.)

The Hawai’i island consists of five volcanoes, four of which are classified as active: Kīlauea, Mauna, Mauna Loa, Hualālai and Mauna Kea. In fact, Hawaii, the only U.S. state not in North America, is made up of 137 volcanic islands.

Kīlauea’s last major eruption took place between May and September 2018 and led to thousands of local residents being displaced and the destruction of 716 homes. That event saw lava oozing from 24 different vents with one major explosion sending debris flying 30,000 feet into the sky.