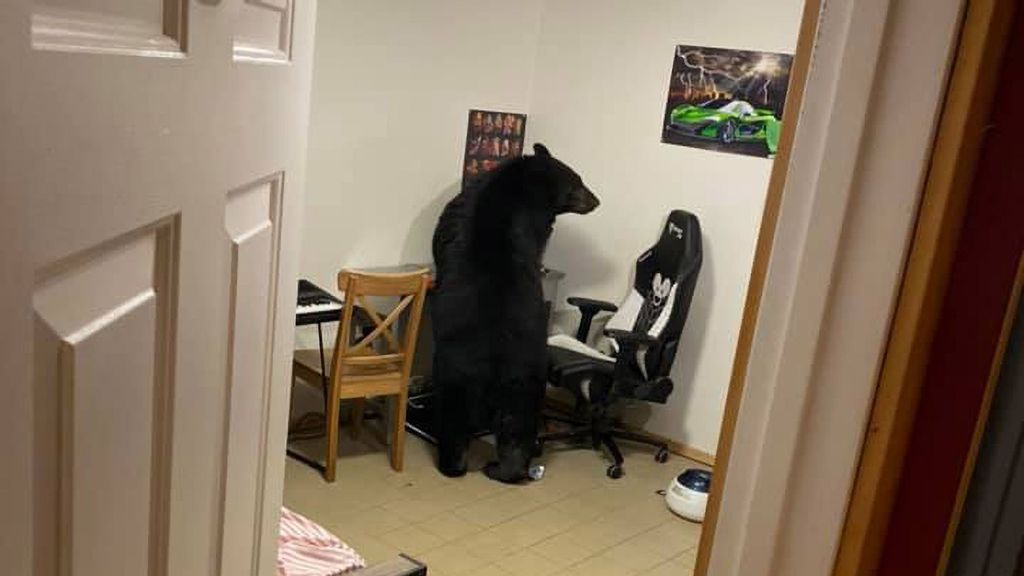 A giant black bear broke a window and entered a house in Fort McMurray in Northern Alberta in Canada in October 2021. (@sean.reddy.52/Zenger)

A Canadian dad snapped a picture of a 602-pound black bear standing next to his son’s gaming chair after it snuck into the family’s house.

Sean Reddy’s home in Alberta, Canada, was invaded on Oct. 4. He was cleaning up his garden because a bear had knocked over the garbage cans the night before.

As he walked around his garden, his two dogs suddenly became agitated. Reddy said he recognized the dogs’ behavior. They had reacted the same way when a bear was nearby.

The dogs soon had the bear cornered near the garage, but Reddy shouted at them to back off as the bear could have seriously injured them. Black bears have strong, highly curved claws.

“The bear did not seem fazed by my dogs, and I was calling them back so as not to them get killed. I locked them [the dogs] in my shop and closed the door to leave the bear alone,” he said.

The bear then made its way into the garage, where it got its paws on dog food and some items in the freezer.

Reddy told his children, Ronan and Cormac, to stay inside and not go anywhere near the garage, as it was occupied by a hungry bear.

The family watched the bear from their window and assumed that after finishing the food it would head back into the woods.

Minutes later, Cormac, 10, asked his dad where all the scratching he heard was coming from. Ronan then shouted to his dad, saying the bear was now in the hallway.

“I went in to see and sure enough, there it was. I don’t remember what I said or if I was yelling at the bear, but that’s when he walked into Cormac’s room.”

Reddy thought a window was open in the room, so he shut the door and hoped the bear would leave the same way it came in.

He rushed outside to check if the window was open, only to find that it was shut.

When he realized he had locked the bear in Cormac’s room, he ran back into the house and discovered his son Liam had left his bedroom window wide open — and that’s how the bear entered.

With Royal Canadian Mounted Police and Fish and Wildlife officials unreachable, it was up to Reddy to remove the bear from his son’s bedroom.

He called his neighbor, who came over with some anti-bear spray.

“We decided to get a bunch of furniture ready to block off the hallway. There is a bookshelf by Cormac‘s bedroom, which I had pulled back thinking at least if I opened the door and a mad bear was coming out, I had a bookshelf between us.”

However, when he opened the bedroom door, the bear did not show itself.

“I climbed over the small bookshelf to look in, and the bear was at the computer desk looking back at me as if to say ‘what do you want? That’s when I said to the guys here: ‘I have to take a picture because no one will believe me!’”

The black bear walked across the hallway back toward the bedroom and left shortly after Ruddy snapped its picture. Damage was minimal; the bear knocked the computer monitor off the desk and smashed it. He also knocked the window screen out.

The bear has not been seen again. Ruddy said bear sightings are not uncommon near the family’s home, although they usually keep to the garden and the garage.

«Previous Post
VIDEO: Apey Birthday To Zoo: Joint Birthday Bash For 2 Wildlife Park Gorillas»Next Post
VIDEO: Flow No! How Plan To Float House Over A Bay Sprung A Leak When The Boat Broke Down