Russian claims of a “flagrant violation” of its sea borders labeled “false” by U.S. military. 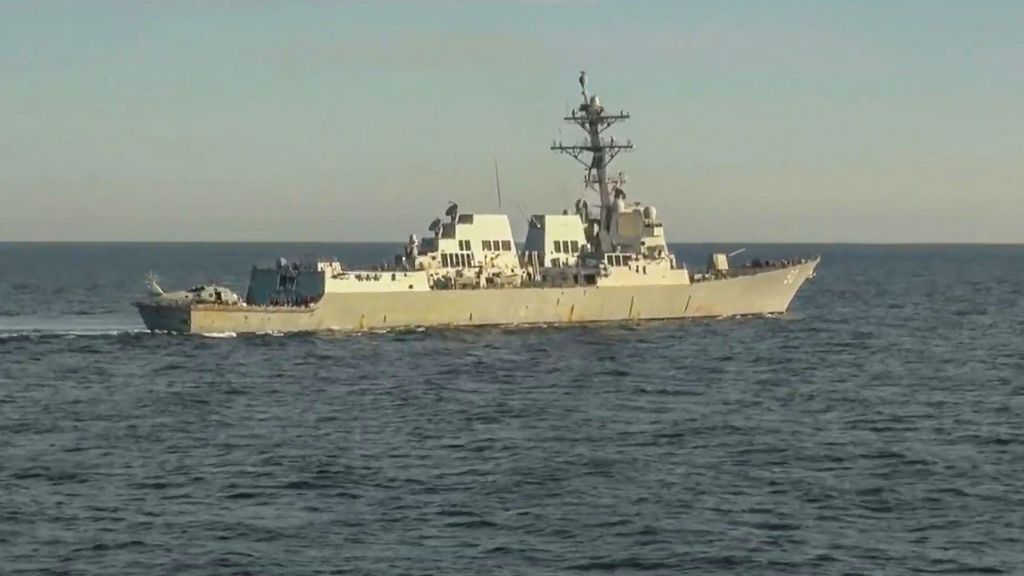 The U.S. Navy dismissed Russian claims that its navy thwarted the U.S.S. Chafee's (shown) attempt to violate its borders, as allegedly seen in footage released by the Russian Ministry of Defense. (Ministry of Defense of Russia/Zenger)

A standoff at sea: The United States says Russian claims that its navy thwarted an American vessel’s attempt to violate its sea borders are false.

The footage, which was shot from a Russian ship and posted online on Oct. 15, appears to show the U.S. Navy destroyer U.S.S. Chafee sailing alongside a Russian vessel in the Sea of Japan. At the rear of the vessel, a helicopter is seen on a landing pad with its rotor blades on. Footage then shows the American vessel from a distance as it appears to change course.

The Russian Ministry of Defense gave this version of the events:

“The U.S. Navy destroyer Chafee (DDG 90), which has been operating in the Sea of Japan for several days, approached the Russian Federation’s territorial waters and attempted to cross the state border.

“The destroyer Chafee … persuaded by the Russian ship’s crew’s decision not to cross the state border, changed course and returned to the previous course, when Admiral Tributs was less than 60 meters [197 feet] away.

“The actions of the crew of the U.S. Navy destroyer Chafee represent a flagrant violation of the International Rules for the prevention of collisions at sea and the Russian-American intergovernmental agreement on the prevention of incidents in the high seas and in the airspace above it in 1972.”

Those claims were denied by the Public Affairs department for the Pearl Harbor, Hawaii-based U.S. Pacific Fleet.

“The statement from the Russian Defence Ministry about the interaction between our two Navy ships is false,” the U.S. said. “While U.S.S. Chafee was conducting routine operations in international waters in the Sea of Japan on Oct. 15, 2021, a Russian Udaloy-class destroyer came within approximately 65 yards of U.S.S. Chafee while the ship was preparing for flight operations.

“The interaction was safe and professional. Although Russia issued a Notice to Airman and Mariners in this area for later in the day … it was not in effect at the time of the interaction. At all times, U.S.S. Chafee conducted operations in accordance with international law and custom. The United States will continue to fly, sail and operate where international law allows.”