An 84-year-old woman takes the controls for her final flight to see the beauty of New Hampshire. 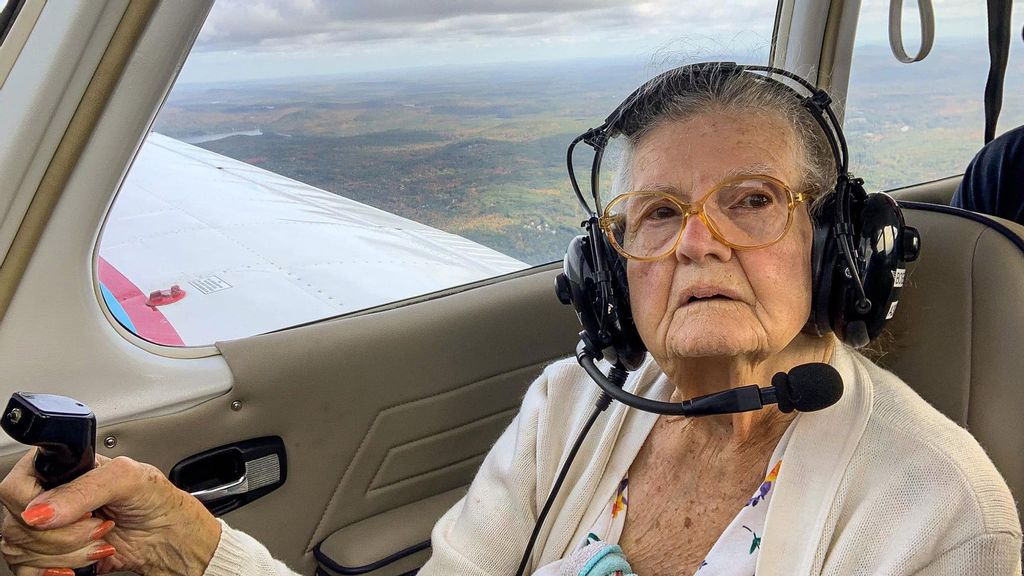 Former pilot Myrta Gage, 84, aboard her final flight. Gage got her pilot's license in 1974 and took her last trip over New Hampshire. (Cody Mattiello/Zenger)

An 84-year-old former pilot with Parkinson’s disease got a chance to fulfill her passion and fly one more time.

Video of the flight was posted to the Facebook group ‘u local New Hampshire’ by pilot Cody Mattiello on Oct. 12.

Myrta’s son Earl arranged the flight, explaining to a flight school that his mother had been piloting plans since the mid-1970s. He contacted Cody Mattiello, a private pilot who keeps a plane at the Concord, New Hampshire, airport.

Could Mattiello help his mom fly one last time?

He did. Together, they flew over Lake Winnipesaukee and Mount Kearsarge to admire the colors below.

“Due to insurance requirements and FAA requirements, the flight school would not be able to take her up. I said I would be happy to take a fellow pilot up in my plane to help with her wish to fly again,” Mattiello said.

“She did amazing and even with her condition, she was able to fly like nothing had changed from the years it (had) been since she flew a plane last.”

Myrta kissed his hand as they walked away from the plane, as she has trouble talking. “I know it was worth it to help out with her wish … I was happy to give it as a gift to her,” he said.

Earl Gage said his mother, born in Basel, Switzerland, was “always ready for an adventure.

“At 16, Myrta met a young Jesuit American seminarian riding his motorcycle through Europe. That motorcycle changed her life trajectory and while she finished secondary school to become a Montessori/Waldorf teacher, her husband-to-be returned to the States and graduated from Boston College with a degree in law,” Gage said.

Myrta was 20 when she boarded a ship to New York City and settled with her husband in Berlin, New Hampshire. The couple had two children.

“It was, I believe, 1974 when Myrta took off from the Berlin Airport. Her instructor, friends, and her husband and children all gathered at the airport to celebrate upon her return,” Gage said.

“When she did not return and could not be reached by radio, her plane was reported missing with all local airports on alert. Unconcerned that she had inadvertently changed her radio frequency, Myrta was enjoying the freedom and the gorgeous views that flying in the White Mountains has to offer.

“She decided to head toward the Connecticut River and follow it back to Berlin. As the afternoon passed and her fuel was getting low, Myrta was preparing for an emergency landing when a voice came through on her radio. Shirley Mann, a respected pilot and instructor out of Lebanon, New Hampshire, airport, was impressed with Myrta’s calm demeanor and talked her down with a perfect landing.”

Myrta was diagnosed with “Parkinson’s-like syndrome” in 1996. “The past 23 years have involved slow deterioration and painful days as Myrta fights Parkinson’s and makes the most of her good days,” he said.

“The recent flight has not only made her happier, but appears to have brought back many memories, not to mention put a little jump in her step,” said Gage. “We hope that Myrta’s story will inspire others who suffer from chronic illness and their families to seize the day.”