VIDEO: Flow No! How Plan To Float House Over A Bay Sprung A Leak When The Boat Broke Down

A small hole in the home’s base almost became a big problem. 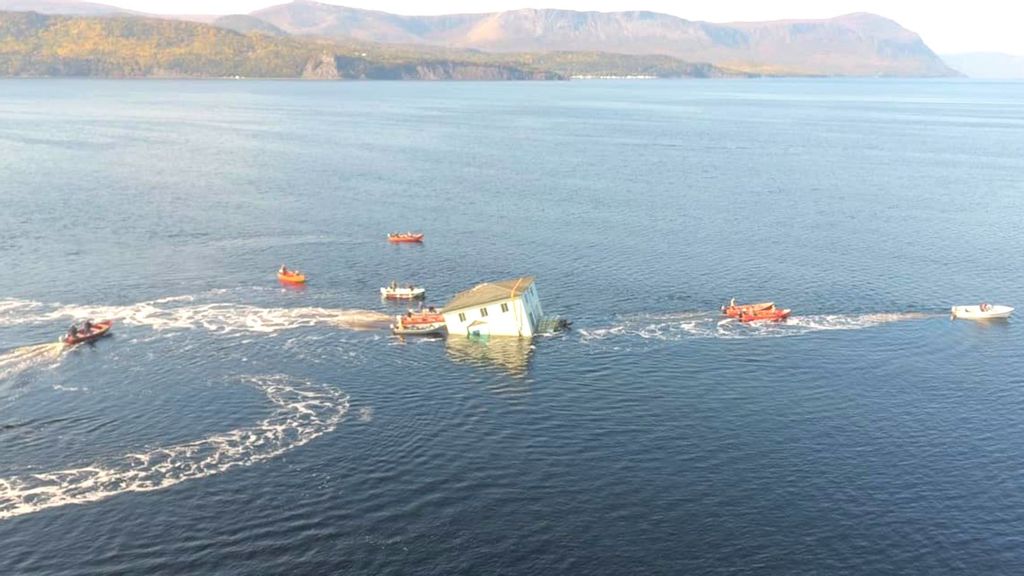 Roughy halfway through its voyage across the Bay of Islands in Newfoundland, Canada, a small hole in the home's base caused it to begin sinking. (Keith Goodyear/Zenger)

A couple’s decision to move their dream home across a bay nearly became a nightmare, as the dwelling almost sank mid-voyage.

Moving the house across water “was definitely an ambitious undertaking,” said Daniele Penney, adding that she and her boyfriend, Kirk Lovell, didn’t know what to expect.

“This hasn’t really been done in decades,” said Penney. “It was really stressful to watch, the house started to sink at one point when the boat broke down. I had to turn away and look at the mountains because I thought for sure my house was gone.

“Once more boats arrived, things started to go a little more smoothly, and the house actually bobbed up a bit for the remainder of its journey across the water.”

The relocation operation took place in McIvers, a small town on the west coast of Newfoundland and Labrador, Canada’s easternmost province. It involved moving the house about a half-mile down the north shore of the Bay of Islands.

Penney, who is 29 and works as a truck driver, said it took them about four months to plan the operation.

Despite all that preparation, the boat began sinking about halfway through its journey.

What almost sank the venture?

“It was a race against the clock to get more boats in the water to get things moving along before it was too late.”

Aerial footage shows the house being towed and pushed across the water, with two huge excavators waiting at the water’s edge to help to pull it ashore.

Once the home arrived, it was pulled up the slope by the diggers and onto a trailer and then slowly edged into place, as seen in the second video.

Another video shows the dream home with an amazing view over the bay in the background being carefully pulled into its final position.

Penney said the massive operation took place because she had always admired the two-story home but was shocked when she heard its owner was planning to raze the house and build a new one on the property.

“I have always loved the house. As a little girl I would joke around saying I would own it one day,” Penney said. “The owners were going to tear it down to build their dream home on the water. It wasn’t a decision they came to lightly, and once I heard about it, I called them. I wanted that house right or wrong, so we made it happen.”

The entire operation, which involved strapping barrels to the bottom of the house, cost about $4,000. Penney says it was Lovell who ultimately decided to relocate the house to their own plot of land on the other side of the water, but it was not possible to move it over land because of the obstacles in the way, including high-voltage power lines.

The house came with fixtures and fittings, much of which ended up water-logged as a result of the move, but the owners are hoping the property will soon dry out, helped by holes that were dug in the bottom for quick drainage.

The final touches are now being put to the property. While that happens, the owners are living in a mobile home.

Even before its epic move, the house had a rich history.

“The gentleman who built the house died in the Second World War, leaving the house to his mother. It was moved to its second location 80 years ago for only a year or two, and then it was moved to the location where we took it from.

“This house is very old, and for me personally it is a dream come true to have the opportunity to own it. We look forward to the challenge of fixing it up.”

The next step, said Penney, is going to be “a lot of renovations, we already have torn the interior of the house down to the studs. We will be bringing this house back to life, and hopefully be in it by Christmas!”

The couple also said that it would probably have been cheaper to build a new one, but it was great to be part of recreating a bit of history, and it’s a memory they will always treasure — now that it’s over.