“The sword, which has been preserved in perfect condition, is a beautiful and rare find,” an antiquities expert said. 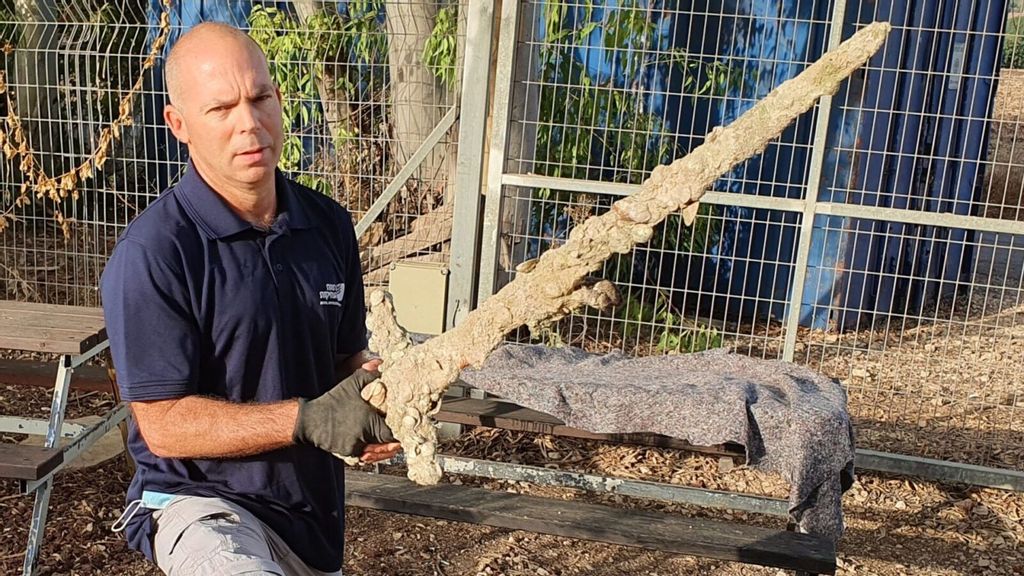 If there’s proof that you can’t go anywhere in Israel without stumbling on some kind of ancient artifact, it’s got to be the news that a scuba diver has discovered an ancient Crusader sword on the sea bed off the Carmel coast.

Katzin saw ancient stone anchors, anchors made of metal pottery fragments, and a sword with a 3-foot-long blade and a hilt measuring nearly 12 inches.

He took the sword ashore, fearing that the find might be stolen or buried once more by the sands, and reported it to the Israel Antiquities Authority.

“The sword, which has been preserved in perfect condition, is a beautiful and rare find and evidently belonged to a Crusader knight,” said Nir Distelfeld, inspector for the Israel Antiquities Authority’s Robbery Prevention Unit.

“It was found encrusted with marine organisms but is apparently made of iron. It is exciting to encounter such a personal object, taking you 900 years back in time to a different era, with knights, armor and swords.”

The sword was discovered in a natural anchorage that has been in use as a temporary natural shelter for ships from the Late Bronze Age, 4,000 years ago, according to Kobi Sharvit, director of the Israel Antiquities Authority’s Marine Archaeology Unit.

“The recent discovery of the sword suggests that the natural cove was also used in the Crusader period, some 900 years ago,” said Sharvit.

Archeologists have been monitoring this particular spot on the Carmel coast since a discovery in June this year. Finds are elusive, however, as they appear and disappear with the shifting sands.

“The Carmel coast contains many natural coves that provided shelter for ancient ships in a storm, and larger coves around which entire settlements and ancient port cities developed, such as Dor and Atlit,” said Sharvit.

“These conditions have attracted merchant ships down the ages, leaving behind rich archeological finds.”

The sword has been handed over to the National Treasures Department, and Katzin was awarded a certificate of appreciation for good citizenship. Once the sword has been cleaned and researched in the Israel Antiquities Authority’s laboratories, it will be displayed to the public.

“The discovery of ancient finds by swimmers and leisure divers is a growing phenomenon in recent years, with the increasing popularity of such sports,” said Sharvit.

“Underwater surveying is dynamic. Even the smallest storm moves the sand and reveals areas on the sea bed, meanwhile burying others. It is therefore vitally important to report any such finds, and we always try to document them in situ, in order to retrieve as much archeological data as possible.”

Produced in association with Israel 21C.