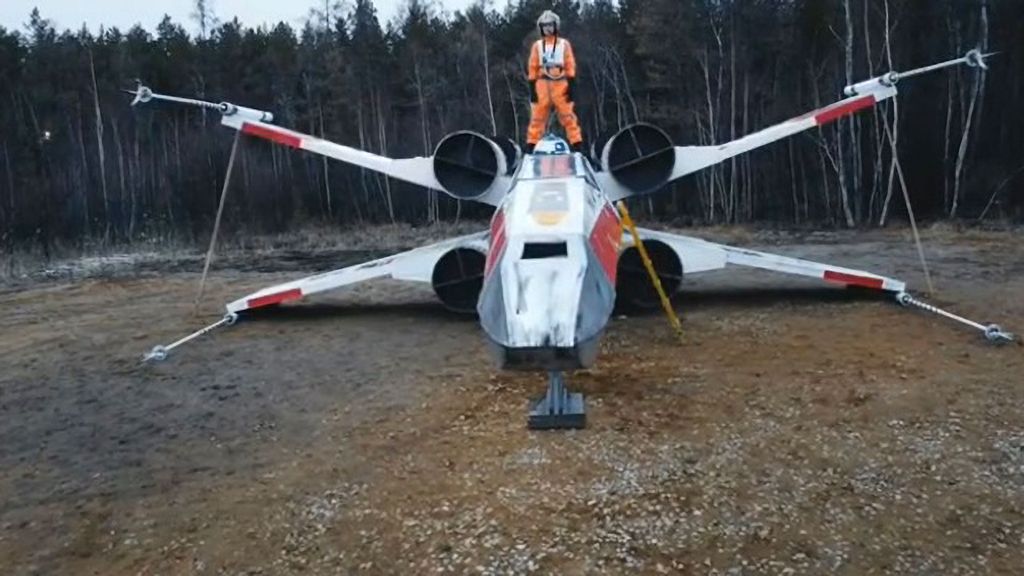 A replica of the X-wing Starfighter from “Star Wars” was built in Sakha, Russia, by six cosplayers. (Ayaal Federov/Zenger)

A team of six sci-fi cosplayers have raised their game to the next level by building a life-size replica of the spacecraft flown by Luke Skywalker, a character from the popular movie franchise “Star Wars.”

They had originally tried to reproduce the Razor Crest, the spaceship flown by the Mandalorian from the hit TV series of the same name, but their prototype was destroyed by bad weather back in April 2021.

Ayaal Federov, 29, said in an interview to discuss the new X-Wing starfighter that “construction of the ship took three months” after they started building it in July.

He joked that he would happily go to space to return Russian actress Yulia Peresild, to Earth if she needed a lift. Peresild was sent as part of a film crew to the International Space Station to shoot a feature film.

The longtime cosplayer and his friends first decided to create the Razor Crest spaceship replica after watching the first season of “The Mandalorian,” which is part of the “Star Wars” universe.

Federov and his friends had planned to make a fan-fiction video featuring both ships.

“We planned the X-Wing during the construction of the Razor Crest and thought it would be very cool if the Mandalorian met Luke Skywalker in our fan video,” said Federov.

Building the Razor Crest allowed the team to gain experience, making the construction of the second ship much easier. “This time, we took into account all the mistakes [from] the first ship, and everyone knew what to do,” said Federov. “We started with the skeleton of the ship and began to strengthen it.”

The ship is made of different materials, including wood, fiberboard, Styrofoam, glass, metal and plastic.

“In addition to the ship, we also made a Luke Skywalker suit for the pilot, as well as a C-3PO and an R2-D2. We did the whole process at the same time,” said Federov.

Federov is undaunted by the thought that the ship may prove difficult to move, noting that even though it means the team cannot participate in various sci-fi events, “We can still show our work to the world.”

He also hinted that they might organize their own cosplay festival, noting that his love affair with cosplay began when he was 11 years old, when he designed a knight’s costume after watching “A Knight’s Tale,” featuring Heath Ledger.

Federov, who comes from the city of Yakutsk in Russia’s Far Eastern Federal District, said earlier this year that he wanted to build the Razor Crest “because no one in the world had built such a ship before.”

He said the entire project to build the X-Wing, along with costs for equipment and storage, came to about $5,600 (400,000 rubles), comparing the flurry of activity in the workshop to that of an anthill.

Work on the project started in November 2020, when Federov began scanning the Internet for pictures of the ship from different angles.

“Everything was important to me: the front, the back and the side views; the color of the ship; the details. It was especially difficult to find the layout of the cockpit. To do this, I took screenshots of the ship while watching the series. I printed all this and hung it on a wall.”

However, the project stalled due to financing issues. Federov sold his car and spent all of his savings on the construction materials and garage space, but it still was not enough.

To complete the project, Federov’s fans and various sponsors came to the rescue.

He even managed to find a suitable hangar in which to store the spaceship, which was no easy task, given that temperatures in Yakutsk average minus 41.8 degrees Fahrenheit (minus 41 degrees Celsius) around this time of year.

“The most challenging task for us was building the engine. It was necessary to make the engines as light as possible so that during installation, the ship’s frame could withstand the load,” said Federov.

The young men eventually used a crane to transport the nearly finished replica from the hangar to a hill, where the final touches were made to the spaceship over four days in temperatures of minus 22 degrees Fahrenheit (minus 30 degrees Celsius).

“It feels like we’re in the show right now, fixing the Mandalorian’s ship,” said Federov. “I am inspired by people who work on films, coming up with costumes for filming, constructing entire cities, but the audience does not even know who these people are.”