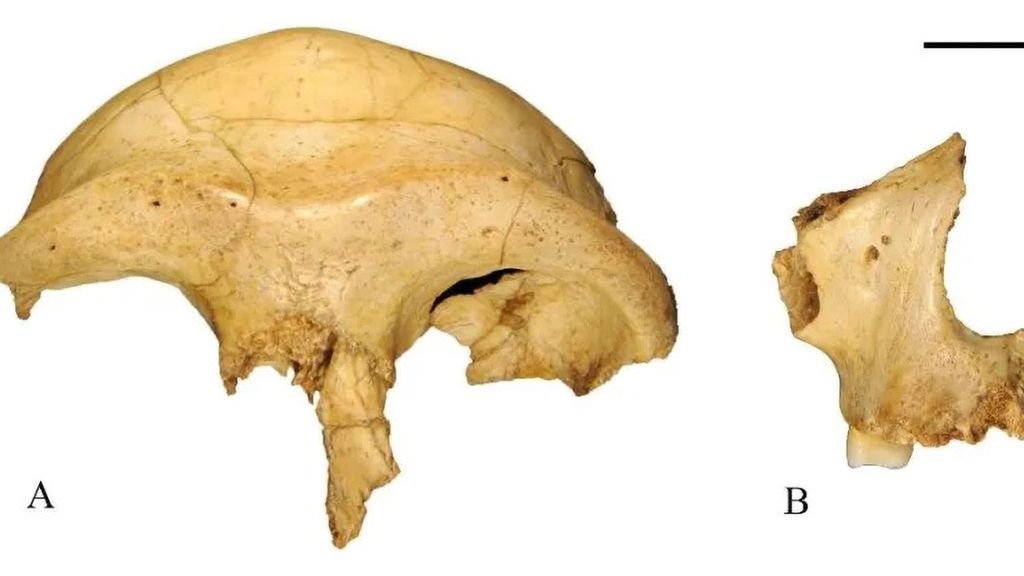 Face bone fossil found in Anhui Province in eastern China that could be the oldest human bones ever discovered. (Ancient Spine Institute, Chinese Academy Of Sciences/Zenger)

A fossilized human skull dating back to between 331,000 and 275,000 years ago appears to have had mostly modern facial features, according to researchers in China. The discovery points to earlier, greater diversity of facial features during the transition from ancient to modern humans.

Advances in technology allowed researchers to restore the face on an almost completely intact skull that was found at the Hualong Cave excavation site in Anhui Province in eastern China, but further tests need to be done to determine whether the fossils are the oldest modern human fossils ever discovered.

Even if they don’t claim the oldest-find-of-its-kind honor, the Chinese researchers still have quite a discovery. It is one that they say “proposes that the transition of human evolution from ancient to modern forms in East Asia occurred 300,000 years ago, which is 80,000 to 100,000 years earlier than previously known.”

Researchers Liu Wu and Wu Xiujie of the Institute of Vertebrate Paleontology and Paleoanthropology of the Chinese Academy of Sciences detail the findings in the Journal of Human Evolution.

The researchers restored the skull found in the cave and said that apart from brow and cheekbone features being similar to Homo erectus and ancient humans from the mid-Pleistocene period between 700,000 and 1.25 million years ago, the rest of the facial features are more like early-modern and modern humans.

“The comparative analysis of modern human specimens resulted in a series of new discoveries and understandings,” Liu Wu said.

“This also gives us some new guesses about human evolution. The initial transition event of human evolution to modern form is likely to occur in a relatively isolated local area, while other parts of China are still being affected by older humans.”

Since the cave project began in 2013, more than 30 ancient human fossils have been found as well as “hundreds of stone tools” and a high number of “mammalian fossils and traces of cuts and slashes on the surface of animal bones,” said a statement released by the Ancient Spine Institute of the Chinese Academy Of Sciences.

The researchers said there was still a lack of consensus among paleoanthropologists regarding when exactly ancient humans transformed into modern humans in East Asia.

“We believe that more ancient human fossil discoveries and studies will further reveal the emergence of modern humans on the East Asian continent and clarify disputes related to the origin of modern humans,” Liu Wu said.