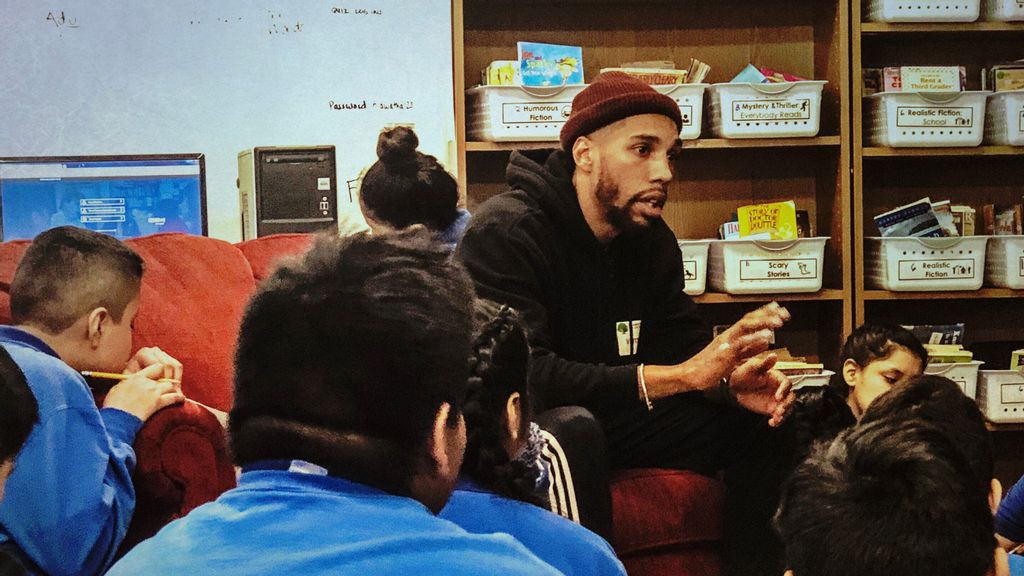 “We do a leadership group every Saturday, teaching life lessons like creating a budget, saving money, having good credit and forming good relationships,” said WBA welterweight champion Jamal James (center) of his involvement at the Circle Of Discipline in Minneapolis. (Courtesy Jamal James)

During the chaos following the police-involved deaths of George Floyd and Duante Wright, Jamal James and his Circle Of Discipline have been a source of refuge and hope for many in his native Minneapolis, Minnesota.

James’ community engagement started years earlier but became more focused amid community protests and racial unrest in the wake of the killings of the two black men — Floyd in May 2020, and Wright in April of this year.

James, the current WBA welterweight champion, lives and trains in the neighborhood where Floyd died at the hands of police, and near Brooklyn Center where a police officer shot Wright.

Former officer Derek Chauvin was sentenced in June to 22 years, 6 months for Floyd’s death. Former officer Kim Potter, who fatally shot Wright after mistaking her gun for a Taser, is scheduled to go to trial Nov. 30.

Wright, 20, was a friend of James’ younger brother, Xavier.

“My little brother’s best friend got killed by the police officer who said she thought she was reaching for her Taser,” said James. “Talking to my little brother, I could hear the pain in his voice because he [Wright] had just helped my brother move into his apartment. Everybody was angry and frustrated, and I felt the same way. There’s a lot of healing that needs to take place.”

James trained amid unrest in the Minneapolis streets, winning his last fight in August 2020 in Los Angeles n a 12-round unanimous decision over Thomas Dulorme to earn his crown.

“Dulorme was three months after George Floyd’s killing, which was right down the street from where I live and where I do my roadwork,” said James. “I literally go to the coffee shop across the street [from where the killing occurred]. My grandmother had passed away while I was training for the fight, which was my first fight back in 13 months in the middle of the COVID pandemic.

“When the city was burning, smoke was coming in through the windows, and you could hear the shots being fired and there was teargas.  People were breaking into all sorts of businesses, looting, vandalizing. There were a lot of different things happening at once, but my goal was to win a title, so life has to go on. We had to stay focused in order to come back with that title.”

Drawing on his experiences in both the ring and life, James has been a longtime mentor of youngsters at the Circle Of Discipline, a nonprofit community-outreach center offering life lessons, activities and stability for inner-city youths. During periods of social unrest, the Circle Of Discipline’s venue serves as a food bank and refuge.

“Our building was right off of Lake Street where all the buildings were being torn down [after they were set afire during protests over Floyd’s death], but nobody touched our facility,” said James. “Our board and staff had a meeting about how and what we could do to help make things a little more positive, so we did a food drive and organized business cleanups. It was great to see random people in the community showing up to help.”

James’ mother took him to the Circle Of Discipline boxing gym as a 5-year-old to channel the youngster’s aggression and temper and to keep him off the streets. James met Shankara Frazier, who would later become his stepfather, along with stepbrother and co-trainer Adonis Frazier, who remains in James’ corner.

“One time a kid who was more experienced than Jamal got the better of him, and Jamal jumped the boy, took his headgear off and tried to choke the kid,” said Frazier.

Jamal would whine and complain about doing certain things,” said Shankara Frazier. “I would tell him to cut that whining out, not so much for the purpose of learning boxing, but to get Jamal to understand at that age what work ethic and discipline was about. He could hardly hold his arms up when he had the big gloves on.”

At 10-years-old, James began an amateur career comprising more than 150 fights, a No. 1 ranking at 141 pounds by USA Boxing, and a runner-up finish in the 2009 national Golden Gloves competition.

James made his professional debut in May 2010 with a third-round TKO of Justin Danforth, taking the nickname “Shango” from his grandfather, Aldric Peter Nelson, who founded the Minneapolis-based world-beat band Shangoya in the early 1970s. “Shango” is also the name of the African god of fire, lightning and thunder.

“When you grow up in a tough neighborhood, you encounter all kinds of crazy situations. I’ve watched my father deal with a lot of guys who were deep into gangs or guys who’ve come from real broken homes,” said James. “Their fathers may have been abusive or their mothers just really didn’t care about them. They were out acting wild in the streets, and they really just changed their lives around.”

Many of those kids were ringside at the Minneapolis Armory to watch James fight there four times: winning a 10-round unanimous decision over title challenger Abel Ramos in April 2018; a second-round knockout of Mahonry Montes in August 2018; a sixth-round stoppage of Janer Gonzalez in February 2019; and a 10-round unanimous decision over former champion Antonio DeMarco in July 2019.

“When I’m in the ring, I want these kids to see that I put it all on the line so that they’re willing to find that extra strength in life. Boxing is one of those perfect things that draws kids in,” said James. “Because it’s really going to test how strong you think you are, mentally and physically. They’ve got all that extra energy, and they don’t know what to do with it, but they still have a warrior-type heart.”

James credits one of the armory’s owners, Rich Richardson, for his assistance in organizing events there.

“A lot of young men and women we serve come from low income communities,” said James. “One of my favorite trips was to take them on a tour of the armory with some of their parents who came along as chaperones. They were given a rundown of what it’s used for and what it takes to run a business like that.”

“I was coming home with black eyes after being bullied in school, and my father wanted me to learn how to defend myself,” said Ramirez.  “I met Jamal on the first day, and he was gentle and welcoming to me. He taught me that boxing’s not forever, so now I have my own business, Chana Lawn And Snow, doing lawns and snow removal.”

In February, James spoke to the Minneapolis Public School District’s Counselor and Coordinator gathering, which “serves all grade levels with a vision to make all students college and career-ready,” said George Terry Jr., an assistant principal at Nellie Stone Johnson Community School in North Minneapolis.

“We invited Shango to speak to our high school seniors across the district about his journey in boxing and how he has managed to overcome adversity and reach his dreams of becoming a championship boxer. Jamal spoke to staff and students about the Circle Of Discipline’s mission to empower underrepresented community members by providing greater access to opportunities,” said Terry, the area’s Gear Up College and Career Coordinator at the time.

“I can see his passion for working with underrepresented youth and why he’s a role model for the city of Minneapolis and the sport of boxing.  I think it is important for our students to dream big like Jamal because they too can accomplish their goals with discipline and hard work.

“I would love to see Jamal come out to Nellie Stone Johnson and speak with my younger students and families so his story and success can inspire them. We also have a room in our building with a heavy bag that students can use to blow off some steam.”

James hopes to relocate the Circle Of Discipline to a new location in November, in a facility paid for by fundraisers and grants.

“With the new location closer to the University of Minneapolis, we’ll have a main gym area with much more space, nice, new equipment, an upstairs area with a conference room, computers, an arts and craft area and a library with more books. They’ll have to do their schoolwork before working out.

“Next door to us, they’re opening a music studio, and we’re hoping to form a partnership with them as well. We do a leadership group every Saturday teaching life lessons like creating a budget, saving money, having good credit and forming good relationships,” said James.

“I’d like to get two or three more 15-passenger vans so that we can transport young men and women living in tough neighborhoods because some parents don’t have cars, and riding the bus can be dangerous going home at night. We want to both bring in guest speakers and take them out to places to see people doing things in real life, and hopefully, once a year, we can take them on a trip out of the country. It’s very rare that some of them get out of the city or state, let alone out of the country.”