VIDEO: You Flirty Rats: Capybara Couple Give Birth To 4 Pups

The newborns will eventually grow to four feet in length. Females are slightly larger than males. 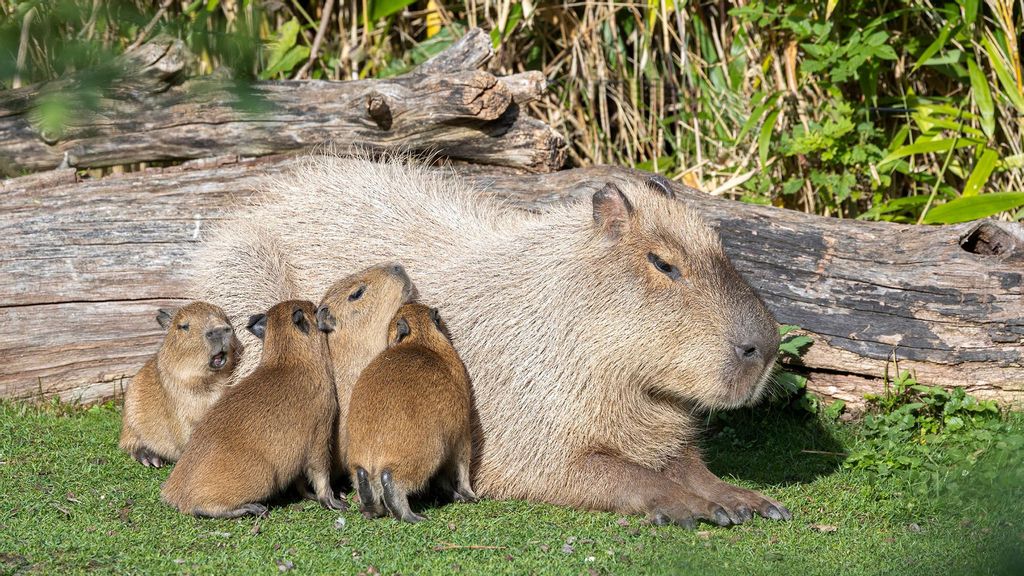 The four capybaras with their mother Sissi at the Zurich Zoo. Capybaras are the largest rodents. (Zoo Zurich, Enzo Franchini/Zenger)

Four giant rodents called capybaras have been born in a zoo in Switzerland.

The birth took place Sept. 27 at the Zurich Zoo to mother Sissi and father Mo, who was also born in the zoo. Sissi originally comes from the Hellabrunn Zoo in Munich, Germany.

The zoo does not yet know the gender of the new babies. “It is determined around three months of age, when the pups are examined and chipped for the first time.

“Even in adulthood, capybara females and males are quite difficult to distinguish from one another because they look very similar and their sexual organs are located inside the body.”

Capybaras are the largest of rodents, weighing between 77 and 145 pounds, with females being slightly larger than the males. The animals tend to live in groups of around 10 adults of both sexes. They congregate with larger groups around water resources during the dry season.

“As they flee the nest, the young capybaras are already nimble around the facility and follow their parents. The mother provides the young animals with milk for about three to four months. The baby capybaras also start eating grass very quickly, in addition to drinking milk,” the zoo said.

While they tend to be grazers, they will consume bark and fruit.

“Together with aquatic plants, grasses form the main food of the largest and heaviest rodent living today. It is no coincidence that they look like oversized guinea pigs; they belong in the same family as house guinea pigs.”

The species are also skilled swimmers.

Capybaras are widespread in South America, found from Venezuela to the Argentine pampas and west of the Andes. “They have little webbed toes and, like the crocodile, the capybara’s nose, eyes and ears are lined up,” said the zoo. “The rodents can submerge themselves almost completely in the water and still smell, see and hear everything.”

The Zurich Zoo plans to build a new home for the capybaras in the Pantanal aviary. By 2025, it is expected “zoo guests will ascend lofty heights and dive underwater” to experience all dimensions of the South American wetland.”

Capybaras are highly social and usually live in groups that can reach up to 100 members although most tend to stick to collectives between 10 and 20 members.

The rodent species is not considered to be threatened, but it is often hunted in South America for its meat and hide.