Suspect seized after leaping into the water in an attempt to escape police. 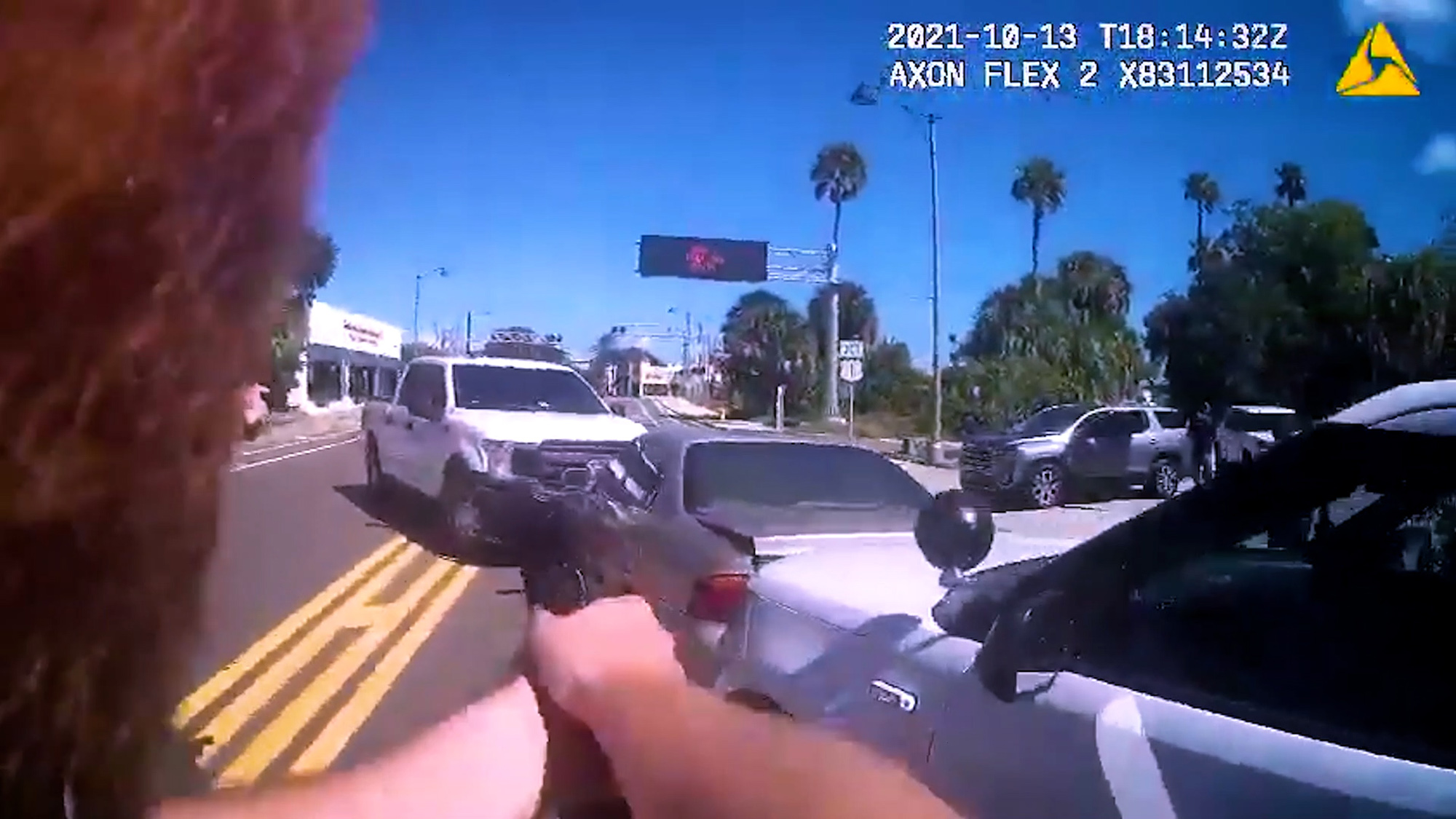 The car driven by Edward A. Sotelo is shown boxed in by two police vehicles, but he subsequently managed to escape and lead police on a chase that ended with him jumping into the Intracoastal Waterway in Florida. (Volusia Sheriff's Office/Zenger)

Here’s a fugitive from the law who wound up being all wet— literally.

Edward Sotelo, a fleeing robbery suspect in Florida, rammed his car into two police cruisers and later jumped into a river, all in a futile attempt to avoid capture.

The chase unfolded in Volusia County, Florida, on the afternoon of Oct. 13.

“The incident started shortly before 2 p.m. when a Daytona Beach Police Department officer assigned to the U.S. Marshals Task Force advised he was driving behind Sotelo, who had an active federal warrant for violation of probation on a prior armed robbery charge,” the Volusia County Sheriff’s Office said.

In video of the chase shared by the sheriff’s department, Sotelo’s car is shown exiting the road and entering the parking lot of a gas station, where it rams into two police vehicles and gets wedged between them. But rather than surrender, he jockeys the car out from between the police vehicles and takes off.

Sotelo is then chased through the New Smyrna Beach and Edgewater areas, ditches his vehicle in a mobile home park and jumps into an inlet of the Intracoastal Waterway. He was in the water for nearly 20 minutes before reluctantly surrendering to officers on a U.S. Coast Guard boat. (A local boater helped to guide officers to the suspect.)

Sotelo had outstanding warrants in Orange County, Florida, for fleeing or attempting to elude law enforcement, grand theft and retail theft, and was identified as a suspect in a series of retail thefts across Florida, authorities said.

In addition to those warrants, Sotelo was charged by Volusia County authorities with aggravated fleeing or attempting to elude with property damage, aggravated battery and assault on a law enforcement officer, driving with a suspended license and resisting an officer without violence.

Sotelo’s car also contained a female passenger, who remained in the vehicle after he fled on foot. The woman, identified by authorities as Melissa Anderson, was taken into custody without further incident. She was found to have two active warrants issued in Brevard County for driving under the influence and possession of a controlled substance. After searching her, Volusia County’s officers charged her with possession of heroin and drug paraphernalia, as well as resisting an officer without violence.

As of this posting, the two suspects remained in police custody in Volusia County. Sotelo is not eligible for bond while Anderson has a bond of $19,000.