The 600-pound leatherback was tied with a tracking device, so its movements could be monitored in the wild. 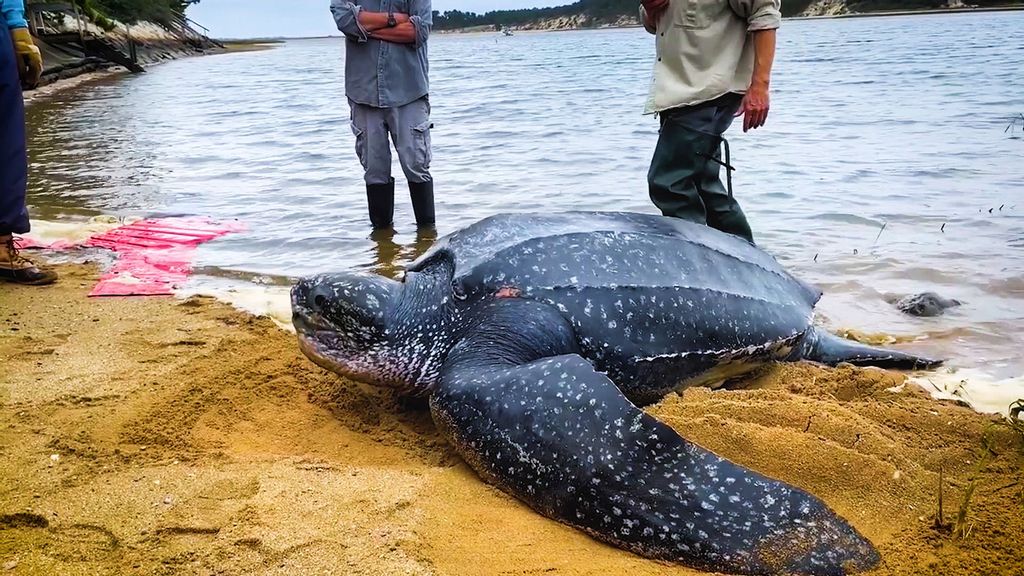 The rescued leatherback turtle being released on Cape Cod in Massachusetts on Oct. 12. (IFAW/Zenger)

An endangered leatherback sea turtle was released back into the wild after being rescued by animal lovers.

Footage shows the massive creature slowly inching its way toward the water as well-wishers watch from the shore on Oct. 12.

“The local response organization for stranded sea turtles in the area, Mass Audubon Wellfleet Bay Wildlife Sanctuary, quickly jumped in to rescue him and called for support from IFAW and New England Aquarium (NEAQ).”

The organization said leatherback sea turtles are the largest turtles in the world, with adults ranging from 550 to 1,500 pounds. They are the only species of sea turtle that lack scales and a hard shell.

This particular specimen was estimated to “be close to 600 pounds — which meant the team needed all hands on deck to transport the animal off the beach.”

In order to cope with its size, rescuers used a stretcher that usually carries dolphins, as well as a “dolphin cart.” The reptile was placed on the stretcher and transported to a beach in Provincetown, where it could be released safely.

Before releasing it into the Atlantic Ocean, the New England Aquarium gave it a full health checkup and tied it with tracking devices, so it could monitor its movements in the wild.

“Soon, the turtle was brought to the water’s edge, where he slowly but surely made his way back to safer, deeper waters.

“Every individual leatherback sea turtle is vital to the survival of this endangered species, and we were proud to be part of such an important rescue alongside two incredible organizations,” the aquarium said.

Leatherback sea turtles are listed as vulnerable on the International Union for Conservation of Nature’s Red List of Endangered Species. Despite not having many natural predators once they reach adult size, the main threats to its survival include human-related activities. Some turtles are caught for their meat.

Their nests are also targeted by humans in Southeast Asia. Many end up stranded in Florida, where they are often hit by boat propellors, causing them to wash up on shore.

Leatherback turtles are also victims of bycatch, a species caught unintentionally by fisheries. In addition, light pollution can impede their ability to ensure the survival of turtle hatchlings. The newborns are attracted to light and often head toward it instead of remaining on the beach and going into the sea.