Boy or curl? The armadillo girdled lizard’s tail-biting contortions are a self-defense mechanism. 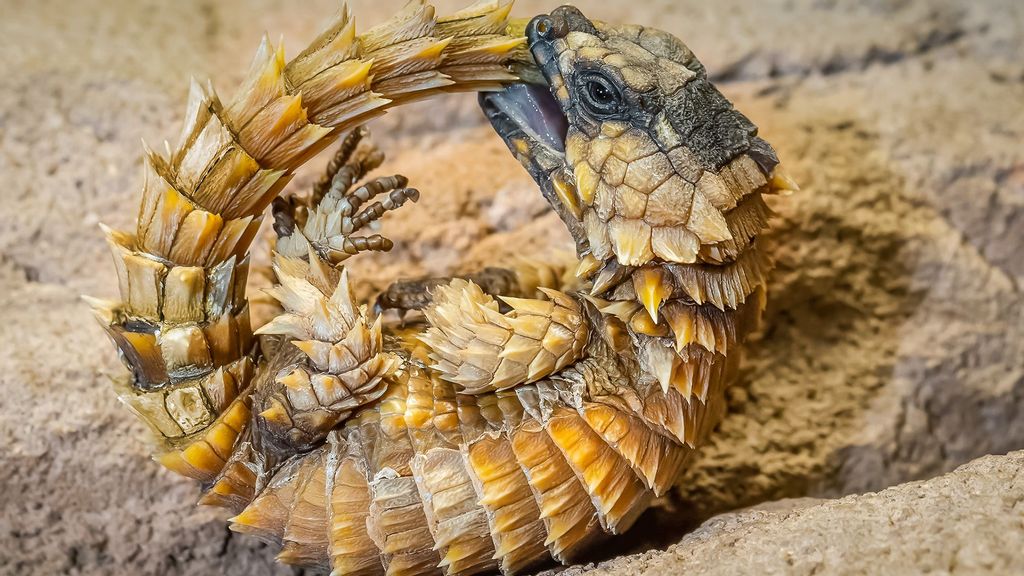 A defensive position of an adult South African armadillo girdled lizard in the Vienna Zoo in Austria. (Daniel Zupanc/Zenger)

Giant armored lizards have been born at the Tiergarten Schönbrunn zoo in Vienna, Austria.

The footage shows a newborn armadillo girdled lizard, which resembles a scaly, wingless dragon, biting its own tail and curling up into a ball while resting in the palm of a zookeeper’s hand.

The baby lizards are endemic to the desert areas on the western coast of South Africa.

“In Europe, there are currently only five zoos in which armadillo girdled lizards live. That the offspring are successful is something very special,” said Stephan Hering-Hagenbeck, the Schönbrunn Zoo director.

“With these lizards, the eggs develop in the mother’s body, where the young hatch and are born. Their spiky scales and defense strategy protect armadillo girdled lizards from natural predators, such as birds of prey and jackals, but not from humans,” the zoo said in a statement.”

“In 2016, for example, the adult animals were confiscated from a smuggler by customs at Vienna Schwechat Airport. For long-term care, the animals were brought to the Schönbrunn Zoo together with poisonous snakes, turtles and geckos.”

Armadillo girdled lizards can grow up to 7.8 inches in size. Its coloration varies from light brown, yellowish-brown to dark brown. At present, it is not known how large their population is in the wild, the zoo said.

The International Union for Conservation of Nature believes illegal trade represents an enormous threat to the species and sees an urgent need for action.

Armadillo girdled lizards primarily feed on insects and spiders, although they also eat plants. They are often fed crickets in captivity, but their most common prey in the wild are termites.

Both males and females have multiple partners in a single breeding season. Females do not lay eggs; they give birth to one or two live young.

Like most lizards, they are most active during the day, hiding between cracks in rocks and small crevices. They communicate with each other by wagging their tails, bobbing their heads and flicking their tongues.

They tend to live in groups that range from 30 to 60 members, if not fewer. Males are known to be territorial toward other males that might challenge them for mating rights with the females.

The armadillo part of its name comes from the fact that it has scales along its back that are almost square and spines on its tail, which is a protection from predators when it rolls itself into a ball, just like an armadillo.