Double Whammy For California As It Tackles Wildfire, Oil Spill Within Days 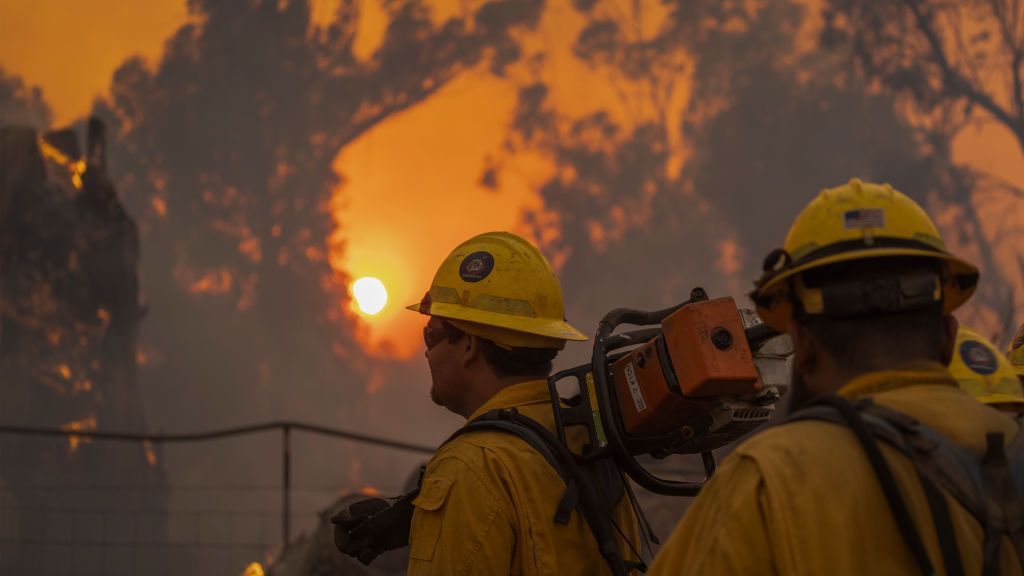 Firefighters battle the Alisal Fire on Oct. 12 near Goleta, California. Pushed by high winds, the fire grew, shutting down the much-traveled 101 Freeway along the Pacific Coast. (David McNew/Getty Images)

Most recently, the Alisal Fire near Santa Barbara has burned more than 13,000 acres since Oct. 11. Dry conditions and strong winds have fueled the fire, the Los Padres National Forest service said. The origin of the fire has not been determined.

A pipeline leak off the coast of Huntington Beach reported on Oct. 2 spilled an estimated 126,000 gallons of oil into the Pacific Ocean. Investigators said the spill may have been occurring for some length of time. An investigation is under way.

“In the last decade, we’ve seen a much higher frequency of megafires with flames at over 100 feet tall,” said Jessica Morse, deputy secretary for forest and wildland resilience at the California Natural Resources Agency.

Megafires are wildfires that burn more than 100,000 acres, according to the National Interagency Fire Center.

“Climate change creates compounding, cyclical crises that feed into one another,” said Morse.

While the fires continued to take their toll this week, the oil spill off Huntington Beach linked to an Amplify Energy-owned Elly offshore rig spread “more than 30 miles along the coast,” according to the National Oceanic and Atmospheric Administration’s Office of Response and Restoration.

Estimates of the oil spill range from 29,400 gallons to 126,000 gallons. The precise amount is still unknown, though cleanup efforts led to city and state beaches in Huntington Beach being reopened on Oct. 11.

With access denied for more than a week, the economic impact was felt by vendors along the beach.

Though California does not have a statewide system for tracking the costs of wildfires, CalMatters estimated a combined $143.3 million in lost revenue for El Dorado County, which was affected by fires in the Lake Tahoe region. In 2018, wildfires cost the state a total of $148.5 billion, 0.7% of the United States’ annual GDP.

“Having people avoid an area that relies on tourism because of an oil spill can be very damaging to its economy,” said Ruth Sofield, an environmental toxicology and chemistry professor at Western Washington University.

She cited Louisiana, where environmental crises have negatively affected the vital shellfish industry, as an example of their potentially far-reaching impact.

The massive BP Deepwater Horizon oil spill in the Gulf of Mexico in 2010 affected Louisiana as well.

“The industry was impacted quite a bit in part because people were afraid to eat shellfish from Louisiana. This is people’s livelihood, and they didn’t choose to have oil spilled on resources,” Sofield said.

“In particular, oyster fisheries in the Gulf region are threatened by environmental change brought on by large sediment and freshwater diversions, which lead to prolonged periods of low salinity and sedimentation; hurricane events, which lead to harmful levels of saltwater intrusion; and oil spills, which lead to hypoxic conditions. These events represent environmental hazards that pose risks to people and nature,” states a 2019 study published in the journal Ecology and Society.

Meanwhile, California has the burden of dealing with wildfires and oil spills essentially at the same time.

Though wildfires have the positive effect of eliminating underbrush in forests and adding topsoil, she said, the “intensity and severity of megafires turn forests to shrub areas and shrub areas to invasive grasslands.”

Drought brought on by warming temperatures and water loss has exacerbated the problems, leading to tree die-offs, which act as “dead-standing fuel,” Morse said.

The California Natural Resources Agency, working with other state agencies, is following what Morse described as a three-pronged “resilience model” for controlling wildfires: intervention to restore natural fire regimes; strategic fuel breaks to reduce spread; and ignition-resistant materials for homes.

She cited the success of such strategies in helping battle this season’s wildfires.

“Creating a network of fuel breaks, like thinning out roadside brush, considerably drops flame height and lowers their heat signature. It makes them much easier and safer to fight,” Morse said.

For oil spills, the precise effects of climate change are more obscure but no less concerning, officials say.

“If you add onto [metabolism] an exposure to something like oil, once they get into the organism, they metabolize or break them down more quickly. In some cases that’s good because you’re getting rid of the [toxic chemicals]. But the downside is, along the way, some of those chemicals become more toxic. And so there’s this increase in the toxic components inside of an organism that can happen through the course of metabolism,” said Sofield.

One study from 2017 published by the National Center for Biotechnology Information on the “Impact of climate change and seasonal trends on the fate of Arctic oil spills” states: “We found differences in ‘typical’ outcome of a spill in a warmer future compared to the present, mainly due to a longer season of open water. We have demonstrated that ice cover is extremely important for predicting the fate of an Arctic oil spill, and find that oil spills in a warming climate will in some cases result in greater areal coverage and shoreline exposure.”