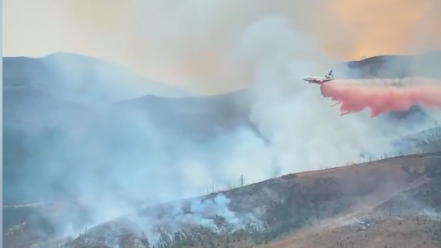 Firefighters brought in a tanker jet to drop a fire-retardant chemical load onto a wildfire raging within a Montana national park.

“A VLAT [very large air tanker] that was timing out for the season helped us out by dropping one of its last loads over the Crown Mountain Fire,” according to a report on the blaze that accompanied footage of the chemical drop posted by the Helena-Lewis and Clark National Forest.

Such tankers are often retired airliners like the DC-10 or C-130 cargo planes that have been and converted to carry and dispense large loads of retardant. The type of jet involved in the Montana drop was not identified by authorities.

The Montana fire is on the 8,400-feet-high Crown Mountain within the park. The footage shows a jet flying over the burning mountain before dropping its load over the blaze.

The fire was 16 miles west of the city of Augusta and has burned through almost 1,400 acres, according to local officials citing the latest information on Wednesday. Its cause is still unknown.

“Local resources are engaged with full suppression actions maintaining the safety of fire personnel and the public as the number one priority,” the park said.

Battling the blaze — which was discovered Oct. 4 — has been complicated by a variety of factors, officials said.

“During the initial three days, gusty winds, unseasonably high temperatures, and dry conditions resulted in active fire behavior and dangerous firefighting conditions for direct attack on the fire. These circumstances forced air and ground crews to disengage from the fire on Oct. 5 and Oct. 6.”

Authorities noted the fire is burning within portions of the footprint of the 1988 Canyon Creek Fire and that steps are being taken to protect buildings and residents in the area.

“Fire personnel installed point protection on threatened ranches adjacent to the Forest boundary in Smith Creek as well as in the Benchmark corridor to include Double Falls recreational cabins and structures in the Ford Creek area. Windy conditions have again prevailed from Oct. 8 through present day.

“The fire is burning in steep, rugged terrain and fueled by regenerated Lodgepole pine and heavy stands of Douglas fir. Smoke is visible from Choteau, Augusta, and along Montana State Highway 287.” Authorities asked those in the area to stay out of the way of fire traffic and crews working there.

The park containing the blaze is named after Meriwether Lewis (1774–1809) and William Clark (1770–1838), whom U.S. President Thomas Jefferson chose to explore lands west of the Mississippi River that comprised the Louisiana Purchase. They started their journey in St. Louis, Missouri, in 1804, reaching the Pacific Ocean nearly two years later.