Pair seized after police shredded their tires with a “stop stick” device. 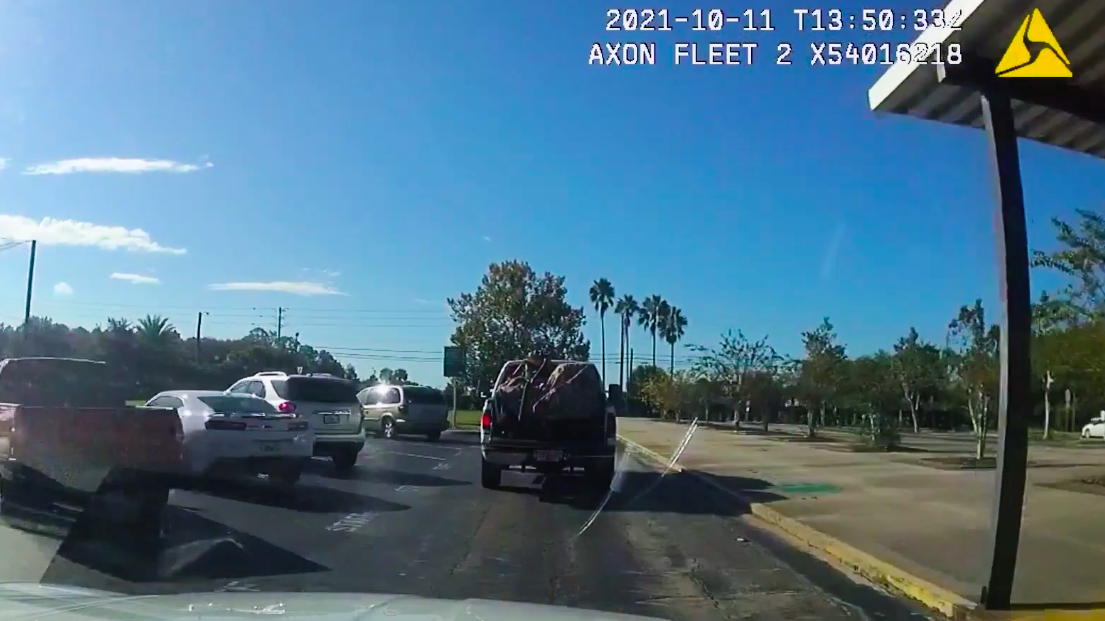 You may have heard the expression “tooling down the highway,” which generally means going out for a leisurely drive. But two suspected thieves in Florida put an ominous spin on that saying by tossing tools and other items from the back of a stolen Ford F-250 pickup truck at the police cars chasing them.

Footage released by the Flagler County Sheriff’s Office begins with a police car with its sirens blaring following a pickup truck that appears to have items in the back of it that are covered in a tarpaulin sheet. The truck pulls out onto a road and nudges vehicles out of the way as it attempts to flee the law enforcement officers.

Multiple police cars appear to be involved in the chase and one of the officers can be heard saying in the video that the suspects are dropping tools out of the pickup truck and advising his colleagues to be careful. The police car from which the footage was shot swerves to avoid the tools in the road.

Authorities said the driver of the truck, subsequently identified as Shane Hendricks, began throwing tools from the driver’s side window at pursuing deputies. He then climbed through a window into the bed of the truck while the passenger, later identified as Tammy Pecor, took over driving the stolen vehicle. Hendricks continued to throw tools from the bed of the truck at law enforcement, including a large blue toolbox, a stamping machine, a sledgehammer.

The chase eventually ends when the pickup truck slows and leaves the road with damaged tires caused by “stop sticks” authorities laid down earlier in the incident. After coming to a stop, Hendricks and Pecor exit the vehicle and are arrested when at least five police officers close in on them with their guns drawn.

“This was a wild and one of the most bizarre chases I have seen in my career,” said Flagler County Sheriff Rick Staly. “These dirtbags, with their long criminal histories, thought it was a good idea to throw tools at our deputies and flee rather than surrender peacefully. Maybe they have watched too much TV and were making a movie. They did. One that a judge will see!”

During a search of the stolen vehicle, deputies located a brown leather bag with a loaded semiautomatic firearm, a scale covered with white residue, a straw lined with a white crystaline substance, a cutting board, methamphetamine and cocaine. In addition, the license plate and the truck were reported stolen from Jacksonville.

After being arrested, Hendricks and Pecor were taken to the county’s jail. They each face a variety of charges, including fleeing and eluding law enforcement officers with lights and sirens on, throwing a deadly missile at vehicles, aggravated assault on a law enforcement officer and driving with a suspended license.

Hendricks is being held without bail, while Peco is being held on a $76,000 bond. As mentioned by Staly, both had an extensive previous arrest record.