Biggest Challenge Might Be Getting Home With Precious Discoveries Intact 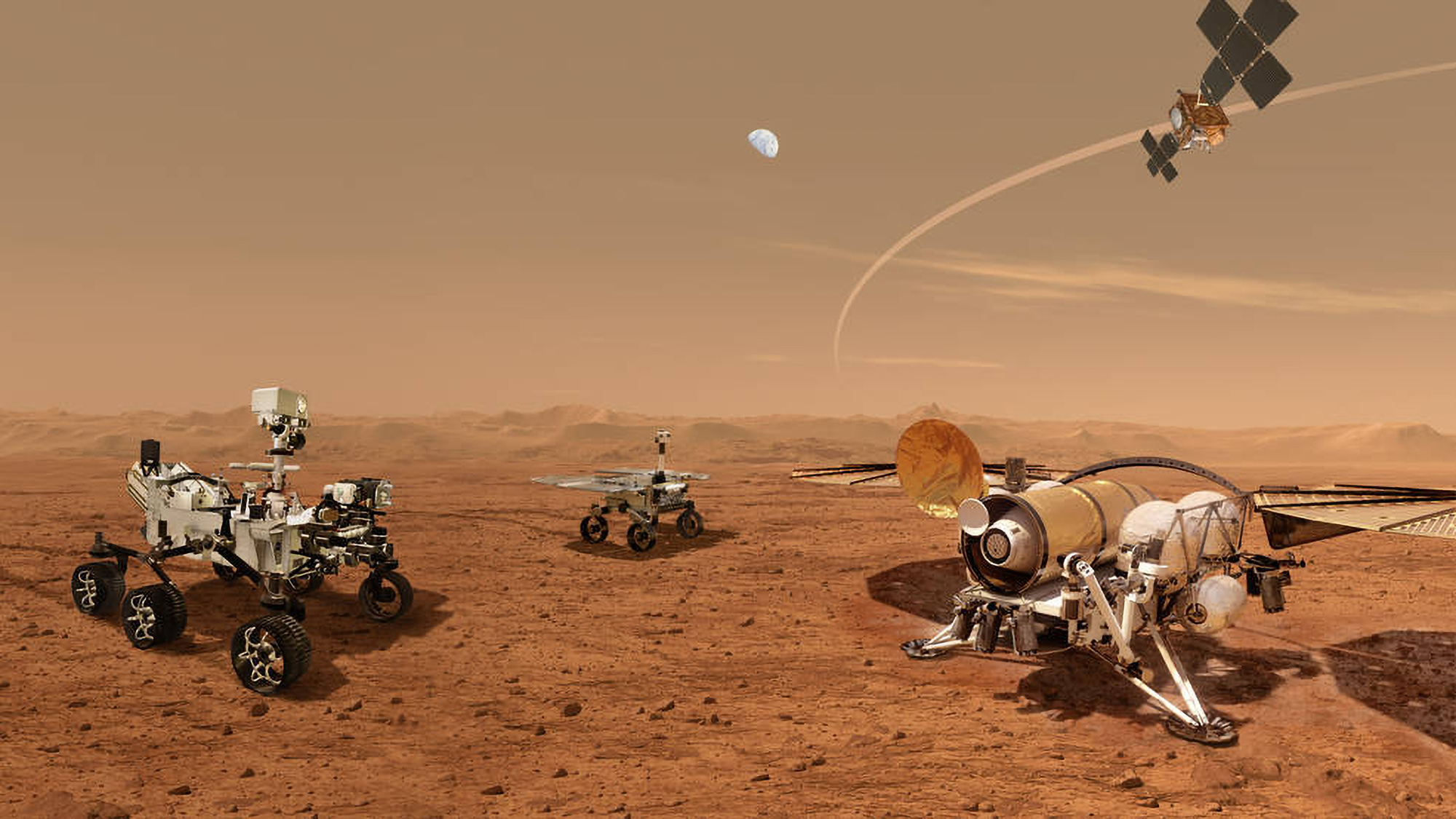 This illustration from NASA's website shows future robots working together to ferry back samples taken from Mars' surface for study on Earth. (NASA, ESA, JPL-Caltech/Zenger)

Animated footage of what the U.S. space agency NASA describes as “one of the most ambitious endeavors in spaceflight history” shows how rock samples collected on Mars will be returned to Earth.

“Multiple spacecraft, multiple launches and dozens of government agencies,” NASA says, will be part of the effort involving the Perseverance Mars rover transferring samples from the “Red Planet” to a lander. Its robotic arm would pack the samples into the tip of a rocket that would take them to an orbiter, which would make the long journey back to Earth.

“Returning a sample from Mars has been a priority for the planetary science community since the 1980s, and the potential opportunity to finally realize this goal has unleashed a torrent of creativity,” Michael Meyer, lead scientist for NASA’s Mars Exploration Program, said in an Oct. 12 statement.

Scientists on Earth will use cutting-edge technology in the best-equipped labs to study the samples, something that is not possible on Mars.

“I have dreamed of having Mars samples to analyze since I was a graduate student,” Meenakshi Wadhwa, principal scientist for the Mars Sample Return Program, said.

“The collection of these well-documented samples will eventually allow us to analyze them in the best laboratories here on Earth once they are returned,” she said.

The mission will involve several firsts aimed at seeing whether life exists anywhere else in the solar system. “I’ve been working my whole career for the opportunity to answer this question,” Daniel Glavin, an astrobiologist with NASA’s Goddard Space Flight Center in Greenbelt, Maryland, said.

The Mars Sample Return mission will first involve a European Space Agency sample-fetch rover to be sent to Mars later this decade to pick up samples collected by Perseverance.

One of the main hurdles facing engineers planning the return mission is how to seal the titanium tubes holding the samples without destroying them.

“Among our biggest technical challenges right now is that inches away from metal that’s melting at about 1,000 degrees Fahrenheit we have to keep these extraordinary Mars samples below the hottest temperature they might have experienced on Mars, which is about 86 degrees Fahrenheit,” said Brendan Feehan, Goddard systems engineer for the system that will capture, contain and deliver the samples to Earth on board the European Space Agency’s orbiter.

Feehan and his team are developing a system that will allow them to limit the heat flow during the sealing process. They also plan to insulate the samples and use conductors to disperse the heat away from the precious payload.

“Initial results from the testing of our brazing solution have affirmed that we’re on the right path,” Feehan said.

NASA also said that it is possible living organisms could be returned to the samples that potentially pose a biohazard risk, and all precautions are being taken.