The curious youngster, who lives in a Spanish zoo, checks out her home with an affectionate family in tow. 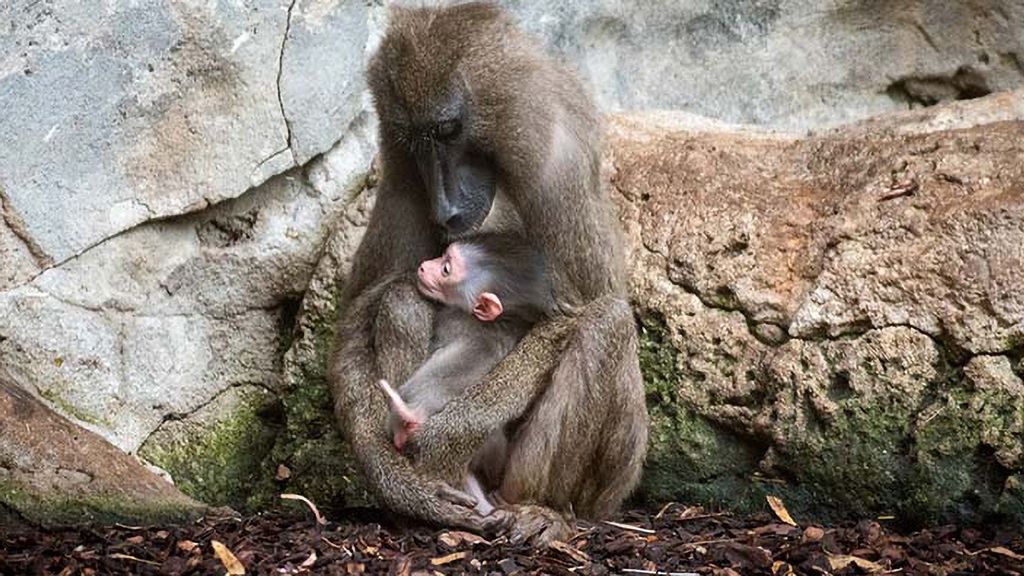 A baby primate, part of the endangered drill species, was born August 26 at a Spanish zoo.

A primary concern for their survival is “habitat loss and poaching, so each birth represents a success toward survival,” said Amanda Sanchis Soler, a spokesperson for the Bioparc Valencia zoo in Valencia, Spain.

Footage shows Akira exploring her surroundings and investigating another animal in her enclosure, accompanied by her protective mother, Abuja, and Rafiki, her father.

Akira plays with the rest of the drill offspring, while her mom tries to keep her under control, the zoo said.

The three drills are part of an extended family of 10.

To keep the drills happy, Bioparc Valencia recreates the riverside forests of Equatorial Africa, their natural habitat. They live in a multispecies enclosure where different species of animals coexist, such as sitatungas, pygmy hippos, talapoins and Nile geese.

Solar said the social organization of the species is centered around a single male that “can have more than 20 females. Males migrate and can remain solitary.” Male drills compete for dominance and the right to breed. Mothers are the primary caregivers.

On average, a male drill grows to about 70 pounds, while females weigh in at about 26 pounds. In captivity, drills live about 28 years. Females tend to have longer lifespans than males.

Drills are included on the IUCN’s Red List of Endangered Species. Their “alarming decline” has caused concern that their status will soon be upgraded to “critical,” said Soler.

She said drills have “a population of less than 4,000 individuals.” Humans are its main predator, while other threats are from the crowned eagle and leopards, “its two most fearsome natural predators.”

The zoo participates in the conservation of this endangered species, as part of the European Endangered Species Program. “The first step to conserve a species is to know it,” said Soler. The Bioparc Foundation also supports nature conservation.

One behavior the primates engage in, and zoo visitors sometimes see, is mutual de-worming.

“To incite his females to do such work, the dominant male touches them lightly on the rump and initiates a brief de-worming, rummaging through their fur, which has the virtue of stimulating his partner to a task that she will dedicate much more time and be more meticulous than the male,” said Soler.

Female drills give birth between December and April, after a gestational period of about five to six months.