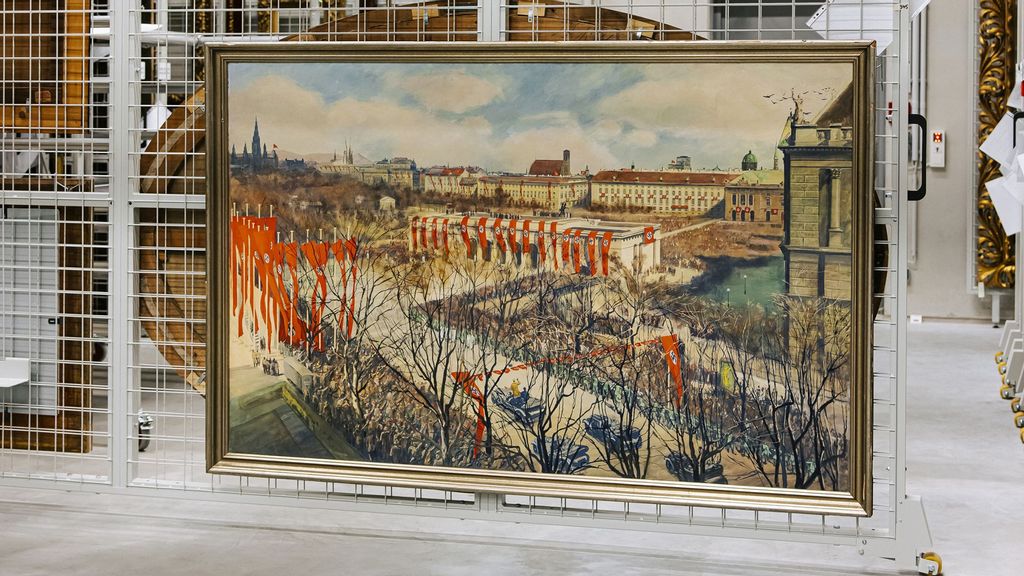 Painting by Austrian artist Igo Potsch depicting driving Adolph Hitler to the proclamation of the annexation of Vienna on March 15, 1938. Potsch was a consultant on painting for the Reich Chamber of Fine Arts, Vienna (Wien Museum, Paul Bauer/Zenger)

Artwork from the Reich Chamber of Fine Arts — a government agency in Nazi Germany established in 1933 by Reich Minister Joseph Goebbels — is exhibited for the first time at a museum in Vienna, Austria.

“The Reich Chamber of Fine Arts (Reichskammer der bildenden Kuenste, RdbK) was the most powerful institution for the political control of art under National Socialism. Membership was a prerequisite for professional art work, making it a de facto obligation for active artists. Persons with Jewish backgrounds, political dissidents, and artists considered too avant-garde were denied membership,” the Wien Museum said.

“The files of the Viennese Reichskammer have now been examined for the first time, revealing the records of about 3,000 artists. Countless works by such figures active during the Nazi regime have also found their way into the collections of Vienna’s museums.”

The exhibition is titled “Vienna Falls in Line: The Politics of Art under National Socialism.”

“New research into these materials provides insight into the political power structures, processes, networks, and artistic attitudes of the Nazi regime, the artists working under it, and their artworks,” the museum said.

The exhibition presents the new findings in seven sections.

“Original objects and documents provide information about the working artists of Nazi Vienna in general and their production of explicitly political propaganda art in particular,” the museum said. “The consequences of Gleichschaltung (the total control of all aspects of cultural life) are traced through nine artist biographies.”

The museum said the “Nazification” of politics and culture predated the annexation of Austria into Nazi Germany.

“In 1936, under the Austrofascist regime, the first Nazi propaganda exhibitions were held” the museum said, “and Austrians participated in expositions in the German Reich. The sculptor Wilhelm Frass, in 1935, hid a letter in which he professed his fealty to Nazism under the Monument to the Unknown Soldier in the Heroes’ Gate; many other Austrian artists, meanwhile, openly flaunted their Nazi sympathies.”

The museum also said that “the anti-Semitic Union of German Painters of Austria was founded in 1937.

“Many artists’ associations were infiltrated by ‘illegals,’ individuals who remained loyal National Socialists after the ban on the Nazi Party on June 19, 1933, until the Anschluss [annexation] on 12th March 1938. Liberal cultural policies were systematically eliminated.”

After Adolf Hitler annexed Austria, “the Reich Chamber’s admissions process for new members was subject to strict bureaucratic regulations; aspiring members needed to meet the Nazi regime’s artistic, political, and racial criteria. Political dissidents and Jewish artists were barred from membership. The Vienna head office reviewed the applications to make sure they were complete,” the museum said, but they were then forwarded to the central office of the Nazi regime in Berlin.

“The power to decide a candidate’s fate and issue a letter of admission rested with the Berlin office,” the museum said.

There is evidence of about 3,000 members of the Reich Chamber of Fine Arts in Vienna during the Nazi regime, the museum said. “Each of these files stands for the fate of an individual artist. Considered in its entirety, the collection offers insight into the rigid system of Nazi art policy, which was characterized by exclusion, oppression, and enforced conformity.”

As an example of the Nazi influence on art and culture in the Austrian capital, the museum gave, among others, Vienna City Hall.

“The Office of Culture founded by the National Socialists supported selected Viennese artists, who were also entrusted with the task of redesigning the artistic decoration of City Hall in line with the Nazi regime’s preferences. By holding competitions and directly ordering works, political decision makers secured their influence over the output of artists and guided their production toward their own aesthetic and propagandistic vision.

“Vienna’s City Hall was the seat of the Nazi municipal administration. In 1939, competitions were held for a redesign of the representative and office rooms in line with Nazi ideology, and selected artists were hired to paint official portraits of high-ranking appointees.

“Monumental murals depicted subjects from German legend and the new Ostmark. Tapestries with Nazi slogans and insignia were an integral part of the regime’s aesthetic program. A platform was added to the tower from which Hitler could address the masses.

“Passages from Hitler’s speech from April 1938 in which he called Vienna the ‘gem of the Reich’ framed a tapestry as well as the new ‘exterior pulpit’ where his words were immortalized on bronze plaques.”