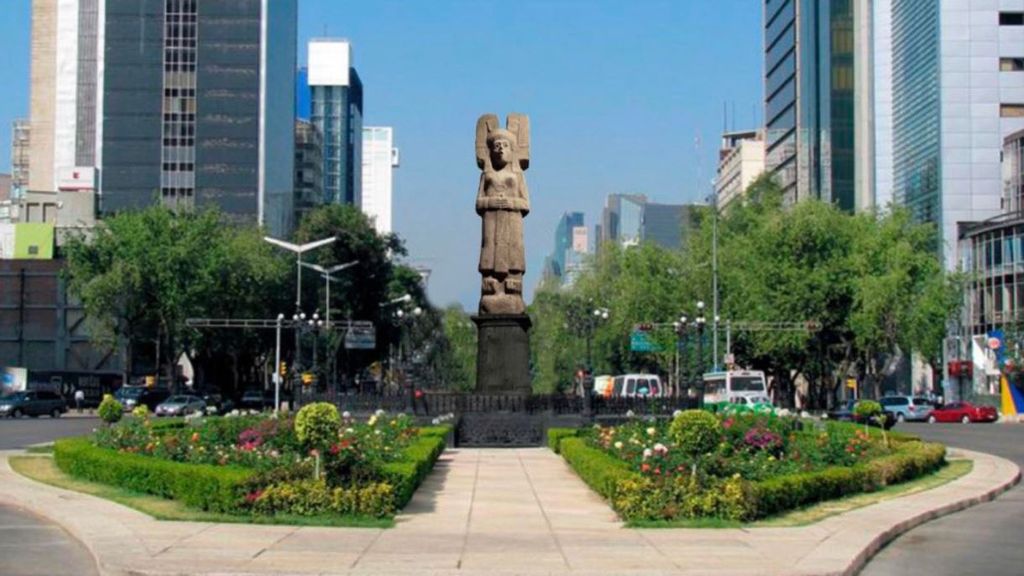 The plans for the sculpture of 'La joven de Amajac' that will replace a Christopher Columbus sculpture on Paseo de la Reforma avenue in Mexico City, Mexico. (Mexico City Secretariat of Culture/Zenger)

Authorities in Mexico City have announced that a Christopher Columbus monument will be replaced by a sculpture of an indigenous woman known as “The Young Woman of Amajac.”

Claudia Sheinbaum, head of the Mexico City government, announced on Oct. 13 that a replica of the statue of ‘La Joven de Amajac’ (The Young Woman of Amajac) will replace the statue of Christopher Columbus on Paseo de la Reforma, one of the main avenues in the Mexican capital.

The Columbus statue was removed from Paseo de la Reforma for maintenance last year, but at the time no announcement was made that it would never return.

The new monument, which will be 19.6 feet high, was chosen after a petition gathered over 5,000 signatures from indigenous women in several towns, and is based on a statue found earlier this year that is over 500 years old.

Sheinbaum said in the statement posted on Twitter: “We want to say that it represents women, but in particular indigenous women.”

She went on to say that the only way to truly understand the history of Mexico is to understand the role that the indigenous groups played in its development well before the arrival of Columbus.

She said that this year marks seven centuries since the founding of the culture of Tenochtitlan (the city that Hernán Cortés ‘conquered’ on the spot that is now Mexico City), 500 years since its fall (to the Spaniards) that set off 500 years of resistance, and 200 years of Mexican independence.

She said that it is important for the city to reconsider its history as told through its statues and street names. “After the Colony, unfortunately a history of classism and racism remained, and the most discriminated group has been indigenous women.”

The original sculpture of ‘La Joven de Amajac’ was discovered by farmers on Jan. 1 this year, in the town of Alamo Temapache in Veracruz, and is currently on display at the National Museum of Anthropology.

Diego Prieto, director of the National Institute of Anthropology and History, said in Sheinbaum’s statement that the statue represents a woman from the upper class of the Amajac group in what is today the state of Veracruz, and was sculpted between 1450 and 1521.

It is 6.7 feet tall, 24 inches wide, and 9.8 inches thick, made of limestone, and depicts a woman covered in jewelry.

Sheinbaum said the location of the statue is one of the most emblematic spots in the city, the famous Paseo de la Reforma.

Colonial-era statues have been the source of controversy recently in several countries including the U.K., Canada and the U.S.

Arguments to have them removed have included historical oppression, while critics claim that removing them is “erasing history.”

Protesters removed a statue of Queen Victoria in Winnipeg, Canada, earlier this year, while a statue of Edward Colston, a slave trader, was thrown in a river in Bristol, England.

An exact date for when the ‘The Young Woman of Amajac’ will be erected on Paseo de la Reforma has not been announced.