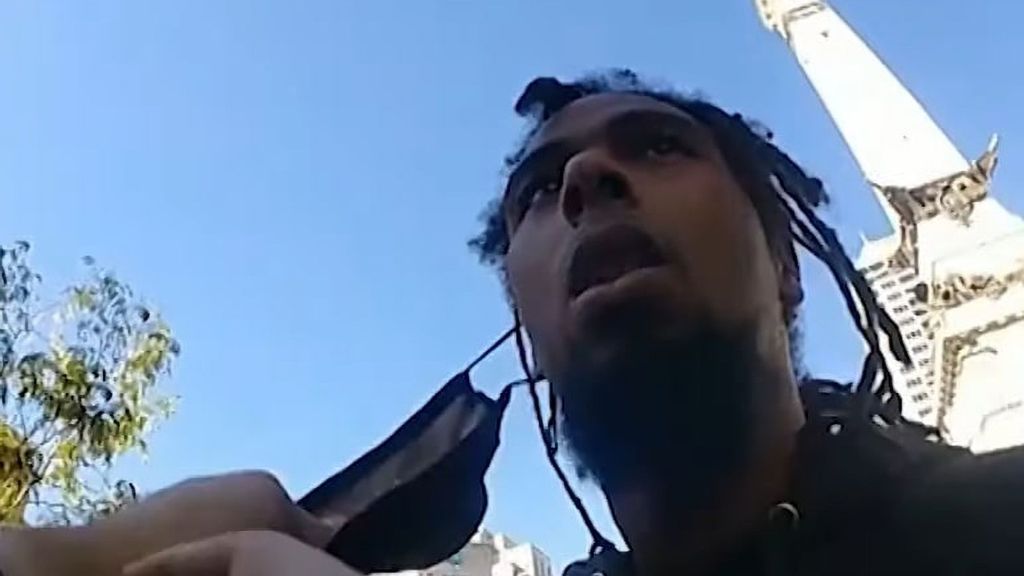 An Indianapolis police officer is facing termination and felony charges of battery and official misconduct in connection with bodycam video allegedly showing him kicking the face of a handcuffed suspect who is on the ground.

Indianapolis Metropolitan Police Chief Randal Taylor said during a press briefing on Oct. 12 that he learned of the Sept. 24 incident last week and immediately began an internal investigation. He recommended the termination of Sgt. Eric Huxley, a 14-year veteran of the department. Huxley was suspended without pay.

“These charges stem from a use of force incident involving Sergeant Huxley on Sept. 24, 2021. Sergeant Huxley was assisting another IMPD officer with an arrest on Monument Circle,” police said in a video briefing on YouTube.

Bodycam video of the incident shows a man identified as Jermaine Vaughn leaning in to officers and repeatedly telling them, “Nobody cares what you do anymore, you understand that?”

Vaughn admitted that he had been “talking/yelling to no one in particular when an IMPD officer approached him,” a probable cause affidavit filed with Marion County Superior Court says.

The video shows Vaughn, who is handcuffed, being wrestled to the ground by one of the officers. The feet of an officer are seen in the video, and then Vaughn is kicked in the face. The officer can be heard saying, “You’re done.”

Vaughn is then heard saying: “There you go, police brutality.”

In the court document, Shores said: “While attempting to conduct an inventory of Jermaine Vaughn’s property, I began removing [his] belt. As I was doing so, Jermaine Vaughn became agitated and began pushing into me. I ordered Jermaine Vaughn to back up and pushed him back away from me; this occurred three times.

Vaughn stated “that when the officer attempted a leg sweep, he avoided the sweep and voluntarily went down to his knees. Vaughn stated that while he was handcuffed and lying on his back one of the officers kicked him in his face. Vaughn complained of a laceration, pain, swelling, and/or bleeding about his mouth/lip,” the affidavit says.

Chief Taylor, said: “Today’s body-worn cameras recording depicting the actions of an IMPD Sergeant are likely to shock and anger you, like it did to me. To the citizen involved in this incident, my thoughts and prayers go out to you. That interaction does not represent IMPD and the work our officers do each day to keep our community safe.”

A police statement also said the investigation is not yet complete,” and that two other officers allegedly involved in the incident had been put on administrative duty pending the conclusion of the internal investigation.

“Accountability and transparency will continue to be a top priority for the department,” Taylor said. “My hope is that my actions today will show that we will hold people responsible for their actions, and that goes for my officers as well.”

The statement also said that “Sgt. Huxley, as with anyone charged with a crime, is presumed innocent unless and until proven guilty in a court of law.”