Suspect said he had two guns and wanted to engage in a shootout with sheriff’s deputies. 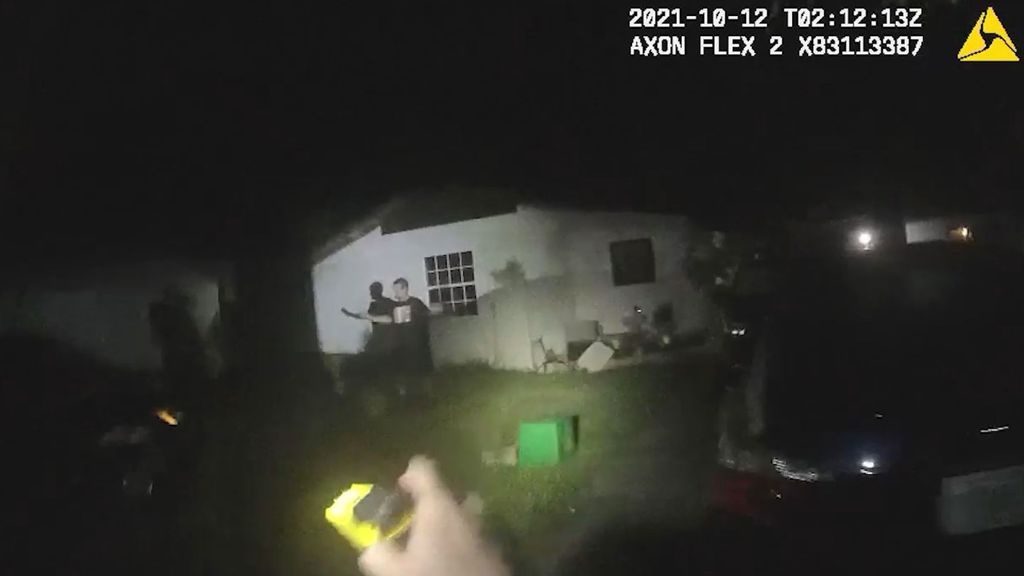 Shawn Loncala is shown at the center of this photo surrendering to sheriff's deputies in Holly Hill, Florida. He led authorities on a lengthy foot chase through several backyards and into at least one home. (Volusia Sheriff's Office/Zenger)

A Florida man allegedly high on methamphetamine who jumped over people’s fences before breaking into an elderly couple’s home and attacking a man there has been arrested by sheriff’s deputies.

The incident took place the evening of Oct. 11 in Holly Hill, which is just north of Daytona Beach on Florida’s Atlantic coast. The suspect has been identified as Shawn Loncala, 35, and cops say he was arrested at around 10:15 p.m. after a group of deputies searching the neighborhood spotted him.

“A Holly Hill-area burglary suspect was taken into custody Monday night after deputies responded to several calls about a suspect jumping on a roof, running through yards and breaking into the home of a couple who confronted him in their dining room,” according to a statement from the Volusia County Sheriff’s Office, which shared footage of the chase online.

The office said deputies were first dispatched around 9:10 p.m., when a resident in a Holly Hill neighborhood reported hearing someone on her roof.

“Responding deputies didn’t find anyone on her property, but soon received additional reports of a suspect running throughout the area jumping fences,” authorities said. “About 30 minutes after the initial report, another call came in reporting a break-in at a home on Old Kings Road.”

“Somebody just came in my house,” the unnamed caller said. “He was running, he’s out here in the yard somewhere. My dog is out there chasing him. He pushed my husband down.”

The woman explained that she was in bed on the second floor and her husband was in an adjoining bathroom when they heard a noise coming from the home’s first floor.

They went downstairs and found Loncala in their dining room. When the husband, who’s 75, tried to apprehend him, Loncala pushed him and ran out the front door.

The sheriff’s department then dispatched its helicopter and K-9 unit to assist in the search.

“As deputies discussed their next steps in the search, they spotted a suspect matching the description and ordered him to the ground,” the sheriff’s office reports. “The suspect, quickly identified as Loncala, told deputies he had been running for several hours, hopping fences, trying to elude capture on his outstanding warrants. While he appeared to be under the influence of an unknown substance, he claimed he’d been carrying two handguns that he dropped somewhere along the way, and that he’d hoped to engage deputies in a shootout.

Loncala faces a litany of charges related to his run, along with arrest warrants for several previous violations.

“He was charged with burglary of an occupied dwelling with assault/battery and battery on a person 65 or older for pushing down the husband of the caller on Old Kings Road, the sheriff’s department said. “He was also arrested on an active warrant for domestic battery by strangulation and an additional charge of making harassing phone calls, along with violating his probation on prior charges of domestic battery by strangulation, felony battery, false imprisonment and fleeing or attempting to elude law enforcement.

“He is in the Volusia County Branch Jail with no bond as of this writing.”

The authorities later updated that posting: “Upon further investigation, deputies found a large plastic bag containing 13.5 grams (about a half-ounce) of crystal meth that Loncala hid in a backyard in the area. He is now charged with possession of methamphetamine in addition to his other charges.”

No further information was available on whether deputies found the guns referred to by Loncala.