The former president’s vacation home in the Los Padres National Forest is several miles from the Alisal Fire. 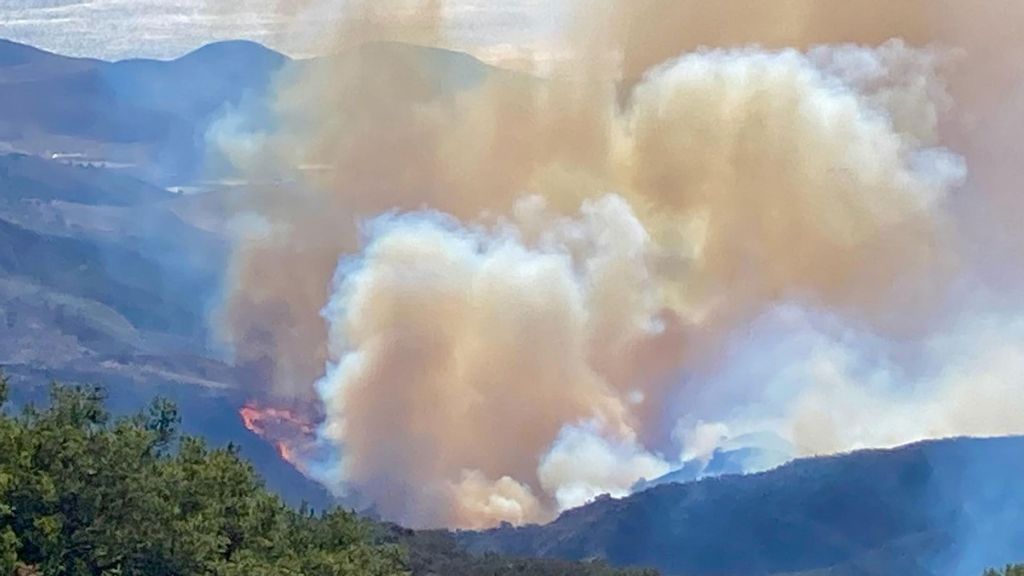 The view of the Alisal Fire as seen from the Reagan Ranch near Santa Barbara, California. (Los Padres National Forest/Zenger).

A wildfire that started near the Alisal Resevoir on Oct. 11 has consumed approximately 13,400 acres and days later was within several miles of former President Ronald Reagan’s Rancho del Cielo.

Video posted by the Los Padres National Forest on social media shows huge plumes of smoke from the fire, which was northwest of the Reagans’ 688-acre ranch near Santa Barbara, California.

“Fire crews are working diligently to keep the fire away from the ranch,” the Los Padres National Forest said in a caption of one photograph posted on Twitter on Oct. 12.

The Santa Barbara County Sheriff’s Office posted a photograph on Instagram on Oct. 12 showing police officers standing in front of a huge orange plume of smoke as the fire raged in the background.

“Three teams of deputies and seven field Search and Rescue volunteer teams visited 101 locations to give evacuation orders and warnings, throughout the night,” the sheriff’s office said. “As of 6:20 a.m., the Alisal Fire stands at 0 percent containment with approximately 6,000 acres burned.

The number of people evacuated was not reported.

The Montecito Fire Department is assisting in fighting the huge fire.

“Erratic, strong sundowner winds continue to challenge firefighting conditions at the Alisal Fire in the Refugio area. Smoke from the fire is impacting our air quality. If you are sensitive to smoke, please limit time outside,” the Montecito Fire Department posted on Instagram on Oct. 12.

The Los Padres National Forest said on Oct. 12: “The Alisal Fire made a push west this afternoon toward Mariposa Reina. Air tankers joined the fire fight & made numerous drops to assist fire crews on the ground.”

The Reagans bought the ranch in 1974, and Ronald Reagan and his wife, Nancy, spent their holidays there. It became known as the Western White House during Reagan’s administration. It is now part of the Ronald Reagan Presidential Library and Museum.

“The ranch was sold in 1998 to the Young America’s Foundation. In 2002 it was dedicated as a California State Landmark by the Native Sons of the Golden West,” according to the museum site.

“The ranch is very informal and has no central heating. The ranch was run by a very small staff keeping it in working order for President Reagan and his visits.

“The President enjoyed working outdoors at the ranch whenever he visited.  A few cows, some dogs and horses roamed freely there.  … The animals from the ranch and most of the Reagan family pets are buried at Rancho del Cielo,” the site says.