The fishing vessel was running out of supplies for a crew member who was experiencing respiratory failure. 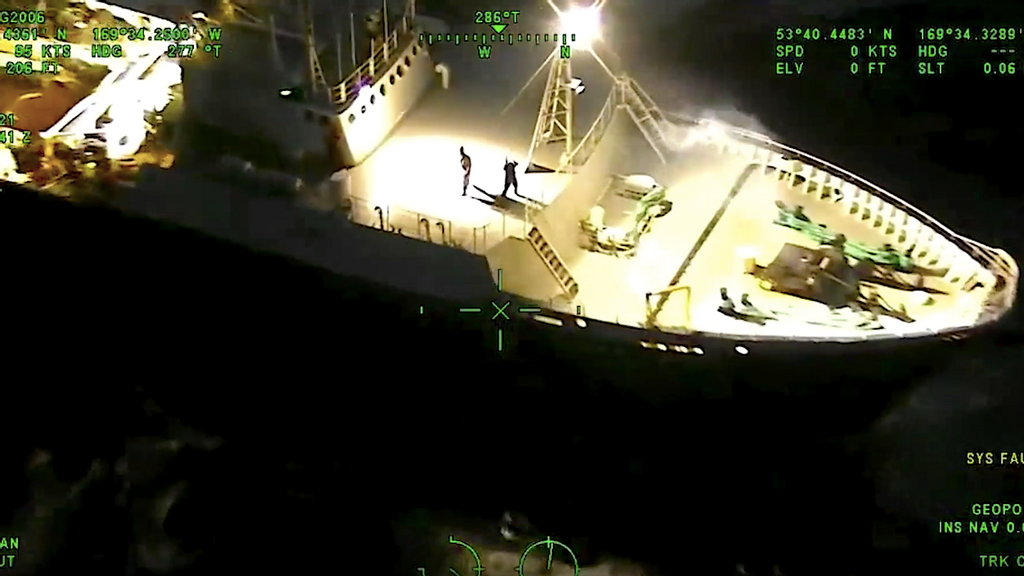 A U.S. Coast Guard air crew dropped 10 lifesaving oxygen bottles to a fishing vessel for one of its crew members who was experiencing respiratory failure on Oct. 10.

Video posted on Facebook shows a C-130 Hercules aircraft from the U.S. Coast Guard Air Station in Kodiak, Alaska, delivering the oxygen cannisters to the ship in waters 120 nautical miles west of the Aleutian Islands port of Dutch Harbor, between the Pacific Ocean to the south and the Bering Sea to the north.

“A crew member aboard the vessel was experiencing respiratory failure and medical onboard was running out of oxygen. A medical evacuation was considered too dangerous, due to the nearly 40 knot winds and 20-foot seas,” the Coast Guard said in its post.

The video shows what appears to be the medevac helicopter arriving at the ship’s location before flying away due to weather conditions.

“After the drop, the vessel began to transit back toward Dutch Harbor to get the crew member to a higher level of medical care. 17th District Command Center watch standers remained on four-hour communication schedule with the vessel to monitor the situation.”

The vessel was identified as the Alaska Victory. There were no updates on the condition of the crew member, who was not named.

“The Air Station is the major tenant of Coast Guard Base Kodiak. It is the largest Coast Guard command in D17 and the entire Pacific Area. The present complement of HC-130Hs, MH-60Ts, MH-65Ds aids in completing our mission and saving lives.”

The air station, which has received many awards, uses MH-65D helicopters and MH-60T Jayhawk Helicopters.

“MH-65D helicopters augment Alaska Patrols by deploying aboard 378-foot High Endurance Cutters to make our presence known to the outer edges of the largest operational area of responsibility in the Coast Guard, over 3.9 million square miles,” the Coast Guard site says. Supported by extremely motivated and professional maintenance personnel, MH-65D Helicopter crew achieve a remarkable 98 percent availability during deployments. Without that type of support, operational effectiveness on the high seas would be substantially diminished.”