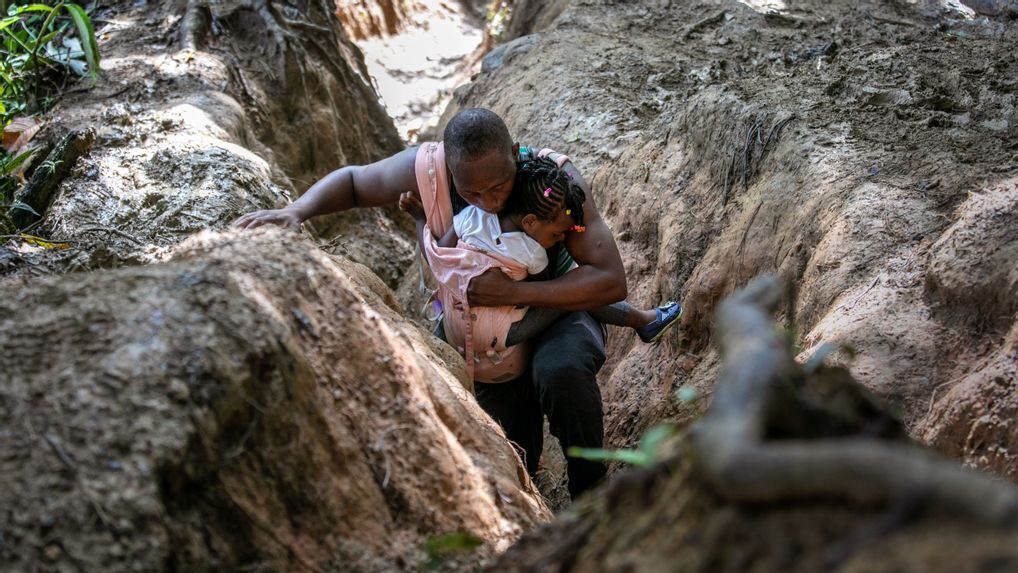 A Haitian father carries his daughter in the Darien Gap, between Colombia and Panama, on Oct. 5. It is the most dangerous passage for migrants walking through the Americas. They often hope to reach the United States, while others stay in Mexico. (John Moore/Getty Images)

MEXICO CITY — A massive number of Haitian nationals attempted to migrate to the United States, eager for a better life, in the last weeks. But for more than 15,000, the dream was crushed.

The vast majority were deported.

They risked their lives on a dangerous journey through the Americas, especially when crossing the Darien Gap between Colombia and Panama, an area filled with rainforests, mangrove swamps and mountain ranges — as well as criminals.

However, not all migrants make it to the U.S. border.

Many Haitians embrace “the Mexican dream” from their journey’s inception. Others have to change their plans and seek asylum in Mexico instead of continuing north. Recently, hundreds have packed the office of Mexico’s Commission for Refugee Aid in Mexico City, hoping for work permits, as they regard Mexico as a place of opportunities.

Prunier Washington has been in Mexico since June. He was living in Tapachula — on the border of the Mexican state of Chiapas and Guatemala. But in mid-September, he moved to Mexico City hoping to fix his immigration status, which has been undefined for several months. His journey began in Brazil, where he lived for a while.

“Most people believe we want to go to the United States, but many of us don’t want that. What we want is to live in a safe country where we can work and survive honestly. I left my country due to political issues, violence, insecurity, lack of work and kidnappings. Life forces us to migrate. Most of us do not migrate because of hunger or lack of shelter, but because it is impossible to survive in our country [of origin],” he told Zenger.

Political and economic instability has forced several Haitians to leave their country in recent years to seek a better life for their families. Events such as the Aug. 14 earthquake — which left more than 1.2 million victims — and the assassination of President Jovenel Moïse on July 7 have been potent triggers of migration.The economic and security problems had driven many more Haitians to migrate, said Yollolxóchitl Mancillas López, a doctor in Latin American studies specializing in migration, and professor at the Well-Being University Benito Juárez García.

Insecurity drives many Haitians to leave their country, but on their journeys, they go through high-risk experiences and become victims of more serious problems, said the researcher.

“Many Haitians come to Mexico from Santa Catarina, São Paulo, in southern Brazil. They travel north to the state of Acre, which is where they cross into Peru and Bolivia. They continue by land to Colombia and then to the Darien Gap on the Panama border. The latter is not an easy journey. Then, [migrants] continue their journeys through Central America,” she said.

“The journey can take weeks or months. Times come when they have no money to eat, pay for lodging, or call the family. They cross through violent places that are also expelling people, [forcing them] to migrate. When they arrive in Mexico via Tapachula, their situation is equally complex,” he said.

Since leaving Brazil, where he had settled, crossing Peru, Colombia and Central America to reach Mexico, Washington has experienced several difficulties. His four-day passage through the Darien Gap was harrowing.

“While crossing the jungle in Colombia, I had a tough time. People die there every day. Many families get split because they cannot walk. [Migrants encounter] hunger, robberies, beggars, kidnappings; we live through all this until we get to Tapachula … The path has marked me. To date, I still suffer,” he said.

Crossing the 66-mile Darien Gap can take a week. The area is prone to torrential rains that often cause flash floods. Reports of robberies and rapes at the hands of armed criminal groups are common.

About 24,000 people from more than 50 countries crossed it in 2019, according to UNICEF. The number increases each year. Now, Haitians make the most attempts to cross it. They usually begin their journey from either Chile or Brazil.

When they arrive in Mexico, some decide to stay, like Washington. But it is not an easy choice.

“I am currently staying in a lodge where I pay per day because I cannot afford to rent a place. Rents are usually expensive, about $300 a month. You need someone to endorse you [offering a pledge of land as collateral], and landlords ask for a two-month deposit. One ends up needing about $900. As an immigrant, you can’t get that amount,” Washington said.

Brustelus Xavier flew from Chile to Mexico City on Sept. 25, hoping to start a new life. He traveled with his wife and two children. The COVID-19 pandemic triggered their journey. Xavier had worked for five years in Chile, and he was able to save some money. He is fluent in Spanish, which he learned there. For him, the most important thing is getting legal status, which would allow him to get a formal job.

“We were undergoing too much pressure. We felt we no longer fit in Chile. During the pandemic, we had many family losses, and we couldn’t get out [of the country, because the borders were closed],” he told Zenger.

“Once the border opened, we looked for a different place to live. We did not leave Chile because we were treated poorly, but because we needed something different. We want to stay in Mexico. We don’t know if it’s going to be six months, eight months or a year, but for the moment, we are here,” he said.

Given the size of the Haitian population in Mexico, President Andrés Manuel López Obrador said at a Sept. 24 press conference that he does not want “Mexico to become a migrant camp.”

Mexico’s National Institute of Migration estimates that 147,033 undocumented migrants are living in the country. The institute has granted 16,919 Haitian nationals legal status to cope with the migratory surge.

While Haitian migrants resolve their migratory issues, there is one thing that is definitive: Their future is not in the country where they were born. “I don’t want to go back there. I don’t even want my corpse to go back there,” Washington told Zenger.