Paraplegic suspect repeatedly refused officer’s assistance and held fast to the steering wheel as he was being removed. 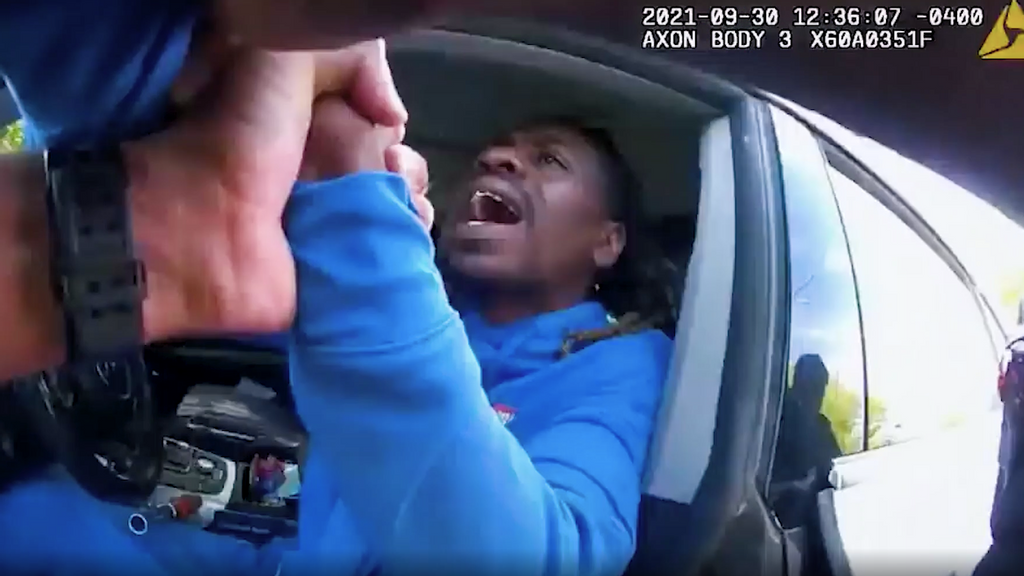 A Dayton, Ohio, police officer begins to remove Clifford Owensby from his car after Owensby, a paraplegic, repeatedly refuses to exit the car and refuses the officer's offer to assist him. The incident on Sept. 30 was filmed on police bodycam video. (Dayton Police/Zenger)

Police in Ohio have released full bodycam video of officers forcibly removing a disabled man from his car after he repeatedly refused to comply so that a K-9 could search the car.

The man was pulled over around 12:30 p.m. on Sept. 30 after police were alerted to a suspected drug house in the area which they were monitoring for Narcotics Bureau detectives, according to a community incident briefing released on YouTube on Oct. 8 by the Dayton Police Department.

Police stopped a white Audi seen leaving the house and asked the driver for his license and registration. After running the tags, they learned that the driver, Clifford Owensby, had a felony drug and weapon history. Since the car was seen leaving the alleged drug house, officers calls for a narcotics K-9 dog for a “free-air” sniff of the vehicle.

When approached again by the officer, Owensby refused to get out of the car, saying repeatedly that he is paraplegic, the bodycam video shows. An officer offers to help him get out, but Owensby refuses and eventually calls someone on his phone and tells them to “bring a camera.”

“I will put you in a lawsuit if you put your hands on me,” Owensby tells the officer.

Owensby holds on to the steering wheels and refuses to comply, repeating that he is paraplegic long after the officer has explained the reason why he needs to exit the vehicle, offering to help, and explaining his options.

As the officer forcibly removes Owesnsby, he repeatedly yells “I’m a paraplegic.”

The officer tells him: “Stop! You’re making this worse than it has to be.”

Owensby is then handcuffed and dragged a few yards to the police vehicle, where officers struggle to put him in the back seat.

Before Owensby was removed from his car, police asked about a young child in the back seat who was not in a car seat.

Owensby said the child is 3 years old. Police called for assistance for the unrestrained child in Owensby’s car.

Police reported finding a large bag containing $22,450 in cash, which the K-9 “alerted on.” Police said that means the bag/money was in the vicinity of drugs at some point.

Owensby was taken to a hospital, where he was examined and released, police said.

Owensby was not charged in the incident.

“A Professional Standards Bureau investigation was started on Oct. 1,” police said in the YouTube post. “Detectives have interviewed Owensby and are gathering all relevant evidence for a complete and thorough investigation, to include the review of policy, procedures and training.

“We will share the results of this investigation once it is completed.”

The briefing also said: “Since June 2020, the city of Dayton and the Dayton Police Department have been engaged in an extensive process in the interest of improving community and police relations.

“Dozens of members of [the department], along with 100+ community members established 142 recommendations. The majority of these recommendations are completed or in progress.”