VIDEO: Elk And Safety: Rangers Tranquilize Elk To Take Tire From His Neck

The bull elk endured the situation for two years until wildlife officers trimmed his antlers and freed him. 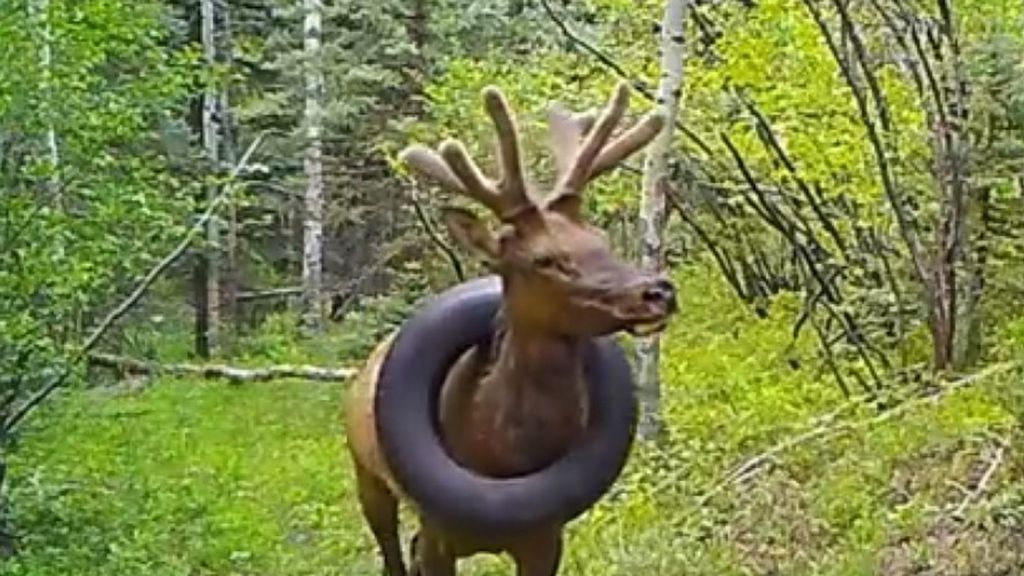 Colorado rangers have removed a tire from around an elk’s neck.

Colorado Parks & Wildlife officers Scott Murdoch and Dawson Swanson tranquilized the bull elk near Pine Junction on Oct. 9 to free the long-suffering animal, which endured the albatross for two years.

The agency said it was the fourth time wildlife officials had tried to tranquilize the elk in the last week.

Swanson said: “I was able to quickly respond to a report from a local resident regarding a recent sighting of this bull elk in their neighborhood. I was able to locate the bull in question along with a herd of about 40 other elk.”

Wildlife officials said the elk was 4 and a half years old, weighed around 600 pounds and had five points on each of its antlers.

The tire removal was tricky.

“We had to move it just right to get it off because we weren’t able to cut the steel in the bead of the tire. Fortunately, the bull’s neck still had a little room to move,” said Murdoch.

“We would have preferred to cut the tire and leave the antlers for his rutting activity, but the situation was dynamic. We just had to get the tire off in any way possible.”

After cutting off the animal’s antlers and removing the impediment, the ranger said they were surprised by the condition of its neck.

“The hair was rubbed off a bit, there was one small open wound maybe the size of a nickel or quarter, but other than that, it looked good,” he said.

Swanson, who was able to successfully tranquilize the bull elk, said: “Tranquilizer equipment is a relatively short-range tool and given the number of other elk moving together along with other environmental factors, you need to have things go in your favor to have a shot or opportunity pan out.

“I was able to get within range a few times that evening, however, other elk or branches blocked any opportunities. It was not until shortly before dark that everything came together, and I was able to hit the bull with the dart. Once the bull was hit with the dart, the entire herd headed back into the thick timber. This is where I was able to find the bull.”

The two rangers estimate the elk probably lost around 35 pounds of weight after the antlers, tire and debris were removed.

“The pine needles, dirt and other debris basically filled the entire bottom half of the tire. There was probably 10 pounds of debris in the tire,” Murdoch said.

Finding the elk was a challenge. Wildlife officials said he would disappear for long periods of time, particularly in winter.

Wildlife officials first became aware of the elk in July 2019, while carrying out a survey for Rocky Mountain bighorn sheep and mountain goats in the Mount Evans Wilderness.