VIDEO: Baby Penguins Take A Peek Outside For The First Time

The chicks are taking in their surroundings. They have also begun eating fish and socializing. 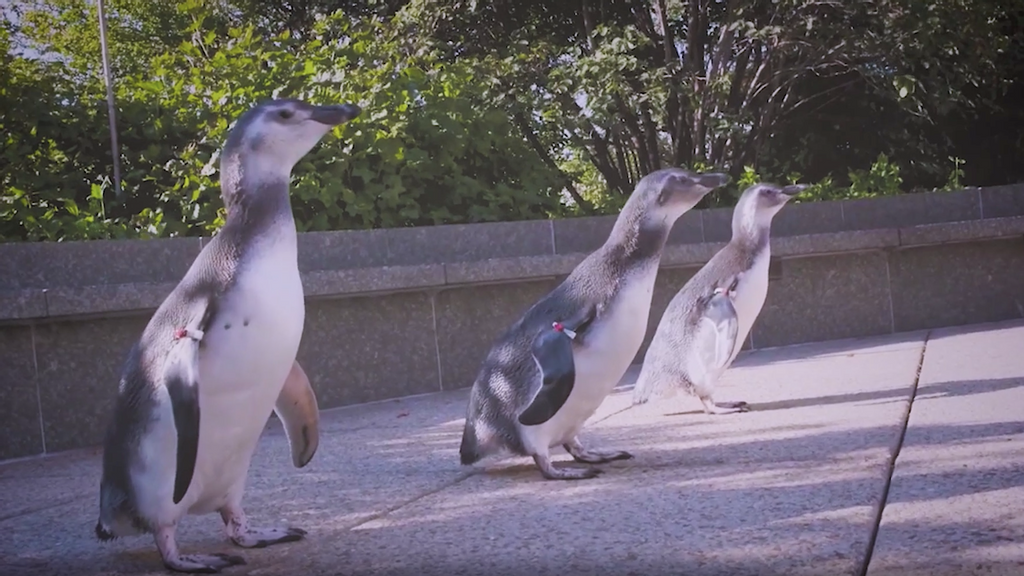 Magellanic penguin chicks born in late April to late May at the Shedd Aquarium in Chicago, Illinois, have taken their first steps outside to explore. They had their first swim in early August, after they got their juvenile waterproof feathers. (Shedd Aquarium/Zenger)

Baby penguins at the Shedd Aquarium in Chicago have taken their first steps outside. And they’ve scored fans on Facebook.

Video posted by the aquarium shows the young Magellanic penguins, which are native to South America, carefully sniffing the air before they begin exploring their surroundings.

The video then switches to the aquatic birds in front of a stingray tank in the aquarium. They look left and right, taking in their new environment.

The chicks were born in late April to late May. They had their first swim in early August, after they got their juvenile waterproof feathers. While penguins don’t get airborne, they do fly through the water, flapping with strong wings. Once their sexes are determined, the aquarium will share naming plans.

The aquarium shared the footage online and said: “Can you believe how fast Magellanic penguin chicks grow? While they have already gone on a few enrichment field trips around the aquarium, this is the first time they’ve explored Shedd’s great outdoors. On this trip, they waddled by Stingray Touch (where visitors can touch stingrays) and meet the cownose rays as they swim by.

“This video highlights several new additions to the penguin colony at Shedd. Taking the penguins out of their habitat to explore new spaces is part of our welfare program at Shedd Aquarium — engaging their senses, encouraging physical activity and adding variety to each and every day,” it explained.

“The penguin chicks have begun taking field trips of their own, including this trip to the aquarium’s outdoor Stingray Touch habitat.”

They have also begun eating fish and socializing.

Magellanic penguins are named after the Portuguese explorer Ferdinand Magellan, who spotted the birds in 1520. They can live to 25 in the wild and 30 years in captivity.

Young ones often have a blotched pattern on their feet, but this tends to fade away as they grow up. They also mate with the same partner for life.

The aquarium also said it is caring for African penguin chicks, which are listed as endangered on the IUCN’s Red List of Endangered Species.

Back in March, to the delight of fans, Internet footage caught Shedd Aquarium penguins on a field trip to a replica set of the hit 1990s TV show “Friends.”