Gom In A Flash: Ancient City Destroyed By Meteorite Could Be Bible’s Sodom, Say Scholars

A cosmic event 3,000 years ago in Jordan could be the source of the Old Testament’s tale of sinful Sodom and Gomorrah. 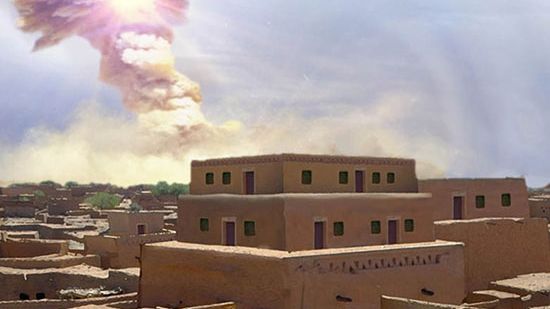 Scientists who analyzed soot found at the Tall el-Hamman site in Jordan have suggested an exploding meteorite, known as a bolide, entered the atmosphere more than 3,000 years ago near the Dead Sea and destroyed biblical Sodom. (East Carolina University)

Has science lent support to the Biblical story of the destruction of Sodom? An interdisciplinary research team thinks it’s a strong possibility that the ancient city was destroyed by a cosmic event — in the form of a meteorite.

Archeologists have found evidence that an ancient city in Jordan may have been destroyed by an exploding meteor thousands of years ago, prompting comparisons to the Bible’s story of the annihilation of Sodom and Gomorrah.

A paper appearing in Nature Scientific Reports presents evidence that a city of the Middle Bronze Age, Tall el-Hammam, in the Jordan Valley east of the Dead Sea was destroyed by a devastating airburst. A layer of carbon and ash 5 feet (1.5 meters) deep was found over an area the size of a city, dating to approximately 1650 B.C.

The characteristics of the soot and melted metals found there show “high-temperature burning throughout the site,” according to Siddhartha Mitra of East Carolina University, a member of the research team that excavated the site. “And the technology didn’t exist at that time, in the Middle Bronze Age, for people to be able to generate fires of that kind of temperature.”

The organic soot they found can only be produced by “really high temperatures,” said Mitra, a soot analysis expert. “So that’s what led us to provide support to the story that this was a very high-temperature fire,” Mitra said, theorizing that “this was an external source of energy such as a meteor.”

The researchers speculated that “a remarkable catastrophe, such as the destruction of Tall el-Hammam by a cosmic object, may have generated an oral tradition that, after being passed down through many generations, became the source of the written story of biblical Sodom in Genesis.”

They noted that Tall el-Hamman may be the second-oldest city destroyed by an airburst, after Abu Hureyra, Syria, and may be the “earliest site with an oral tradition that was written down (Genesis).” Archaeologists believe Abu Hureyra was destroyed nearly 13,000 years ago by an equally catastrophic cosmic event that was not recorded by history.

There was once a massive palace complex at Tall el-Hamman with thick walls and a monumental gateway that were largely destroyed. The biblical account in Genesis 19:24 described “burning sulfur” raining down on “Sodom and Gomorrah — from the Lord out of the heavens.” The scripture also refers to the destruction of the entire plain and people living there, as well as the devastation of the vegetation.

Evidence of a bolide strike include melted pottery, mud bricks and roofing clay as well as diamond-like carbon and melted metals, such as gold, iridium, platinum, nickel and silver. There is also evidence of shattered, burned human bones in the destruction layer. High concentrations of salt there may explain why ancient peoples abandoned more than a dozen cities in the lower Jordan Valley in the centuries that followed.

The research team considered other possible sources of destruction, such as warfare, wildfires, seismic activity and lightning, but none could explain the level of devastation.

The study does not attempt to verify the biblical account, Mitra said, but he admitted that “the data seem to fit.”