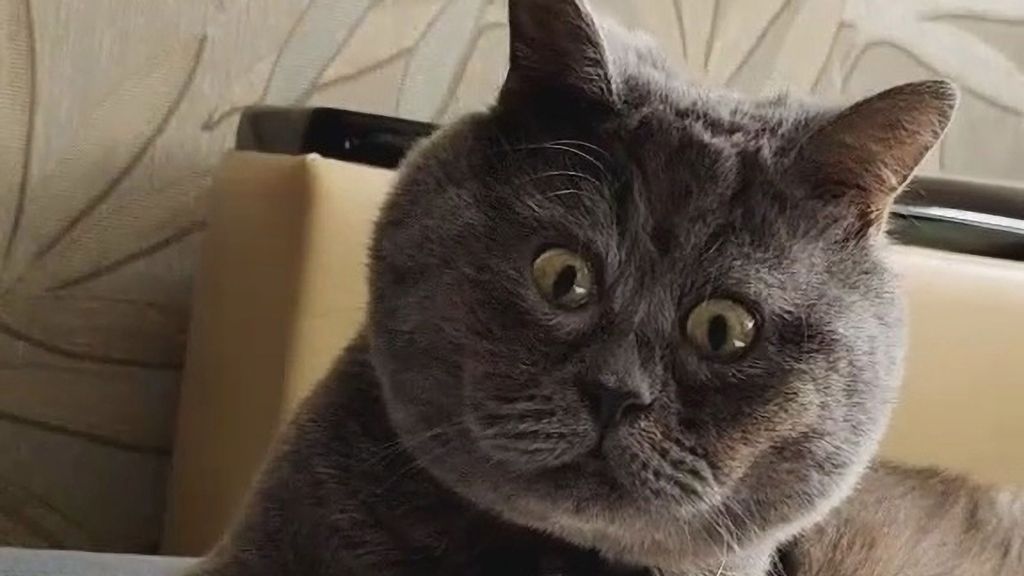 Fedya, a cat from Rostov, Russia, with a constantly surprising face, became a star on social networks. (@fedja_kot/Zenger)

An owner turned her cat’s face into a lifetime of free food.

Fedya counts 37,000 followers on Instagram, thanks to his unusual feature: a startled expression. It’s so singular, a cat-food company offered to sponsor him.

Fedya’s owner, Natalya Zhdanova, who lives in Rostov, Russia, said: “We have agreed on permanent supplies with a cat-food brand. So Fedya already provides himself with food.”

Natalya said she is protective of her pet, who is shy and “afraid of filming in new places. Fedya does not like the attention of strangers.”

That’s why she doesn’t accept every invitation to make videos of her sweet gray cat. Natalya took Fedya in after he was apparently abandoned by his mother in her garden. She believes the cat was left because he looks different or may have been dropped on his head.

Is he mentally as well as physically notable? “Fedya can’t be offended and angry. He’s a bit slow and clumsy. He has a late reaction, he is surprised by everything, afraid of unfamiliar sounds.” Natalya said.

She also describes him as “kind and affectionate.”

Natalya writes children’s books for a living and said it would be interesting to create a story about Fedya. “Perhaps his story will … teach children compassion and mutual assistance.”

While Fedya is curious, he is not mischievous. “He likes to explore and likes to walk in the yard.”

But she said the feline Internet sensation is a model pet.

“Fedya always behaves well! He never climbed on the table and did not steal food. He didn’t spoil things and didn’t even sharpen his claws on furniture,” she said. “He knows from infancy what the toilet is for. If there were mistakes, it was only because of his clumsiness. He’s just an angel!”

A cat lover, Natalya said her other cat, called Handsome, is 2 and a half years old, only four months older than Fedya, his “son.”

Discussing where Fedya’s name comes from and what it means, Natalya said: “The name Fedya is an abbreviation of the old Russian name Fedor. It is soft and cozy, like our cat. This name is very suitable for him. It was the name of my ancestors.”

Cats are independent animals and lower maintenance than dogs, who need walking, training and frequent grooming. Cats don’t need much space to play and explore, which makes them ideal pets for city residents. The companionship has been known to lower stress and anxiety in owners.