The massive-antlered male gets a rutting signal from a nearby doe. 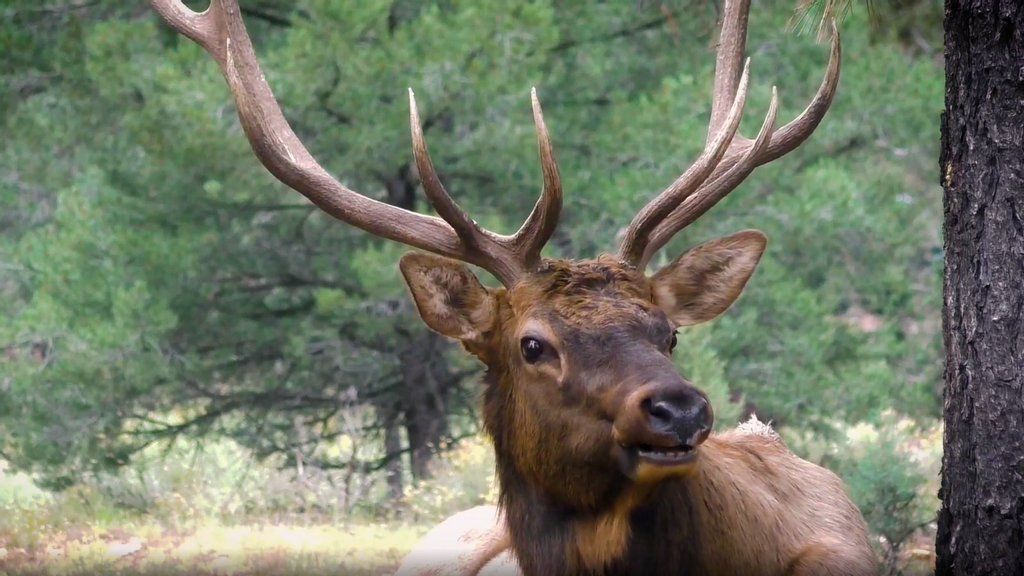 It is now the height of mating season for the Rocky Mountain Elk in Grand Canyon National Park. (GrandCanyonNPS, Rader Lane/Zenger)

Love, or at least procreation, is in the air — especially in the animal kingdom.

It is now the height of mating season for the Rocky Mountain Elk. From mid-September to mid-October, males form harems made up of multiple females.

As the video illustrates, when nature calls, it gets a response.

Footage shows a large elk with massive antlers lying beneath a tree and munching on some grass. Then it hears a noise, which the United States National Park Service attributes to a rutting female. The male’s eyes open up wide, his head and ears perk up, and the elk responds with a loud call.

The footage was shared online by the National Park Service, which said: “The Rocky Mountain elk mates in the fall. At Grand Canyon, this means bulls (mature male elk) are often found in the Village, forming harems (group of females) and competing with other males.

Rocky Mountain elk are a subspecies of elk that primarily live in the Rocky Mountains in North America. They stretch from the northernmost part of Western Canada down to the southwestern United States.

Male Rocky Mountain elks have the largest antlers of all elks, according to the Oregon Department of Fish and Wildlife. Elk are the largest species in the deer family. They are also one of the biggest land mammals in North America. Only males have antlers, which they shed and grow a new set each year. A mature bull’s antlers can weight up to 40 pounds.

There are now 74,000 Rocky Mountain Elk in the state of Oregon, according to the Oregon Department of Fish and Wildlife. The species was reintroduced to Colorado in 1913, after regional herds almost went extinct.

There are about 1 million elk in North America today, which is only 10 percent of the total population that existed prior to Europeans emigrating to the continent.

Calves are usually born in late May through early June. They spend their first few weeks hiding motionless from predators while their mothers feed. After mating, bulls either live alone or in groups with other males.