VIDEO: Car Thief Crashes Into House After Cops Give Chase 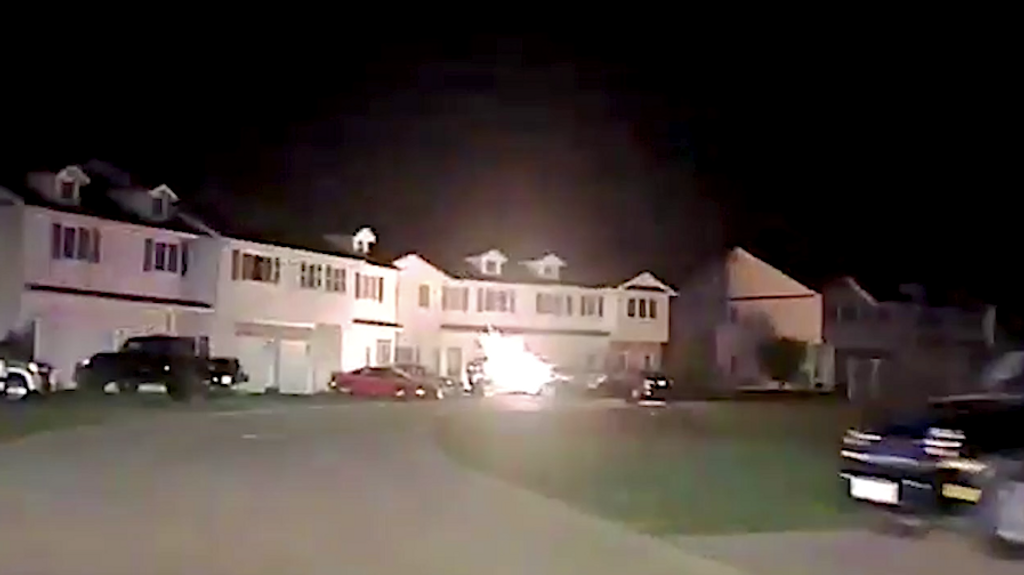 Police car dashcam captured the moment two suspects bailed out of a moving vehicle before it crashed into a residence in Medina, Ohio, on Oct. 6. (Medina Police/Zenger)

Police in Ohio arrested two juvenile males after they ditched a stolen car while it was still moving. The car then crashed into a nearby residence, causing extensive damage but no injuries, police said.

Events leading up to the incident began at about 11:30 p.m. on Oct. 6, according to a Facebook post by the Medina Police Department. Police responded to reports that two males were attempting to break into a vehicle and one had fired a gun.

“The complainant advised he observed a male inside his vehicle and confronted him. The male fled the area, however, he pointed a handgun at the complainant and fired one round while running. The complainant was not hit. Officers established a perimeter to search the area with the assistance of a K9 team and a drone,” police said.

While police were trying to find the two male suspects, another call came in reporting that a vehicle was stolen from a driveway one street over. As he was taking the report for the stolen vehicle, the officer and the first complainant saw the vehicle driving past on a nearby road. Officers unsuccessfully tried to stop the vehicle.

Video from a police vehicle dashcam shows at least two patrol cars chasing the suspects in the stolen vehicle. The suspect is seen driving in the suburban neighborhood and jumping out of the moving vehicle as it begins to turn. That’s when the vehicle crashes into a residence.

A police officer can then be heard shouting at the suspect to put his hands up.

“The driver bailed out of the moving vehicle. The vehicle continued and struck a residence causing substantial damage but no injuries,” police said. “The driver and passenger of the stolen vehicle were taken into custody quickly. A handgun was located and seized for evidence.

“The suspects, both juvenile males from Cuyahoga County, were transported to the Medina County Detention Center pending charges.”

“Please remember to lock your car doors and remove the keys or key fobs!”

“The rate of crime in Medina is 22.46 per 1,000 residents during a standard year. People who live in Medina generally consider the east part of the city to be the safest,” crimegrade.org said.