An Italian friar wrote a history of the world in 1345 that mentioned lands discovered by Norsemen in North America. 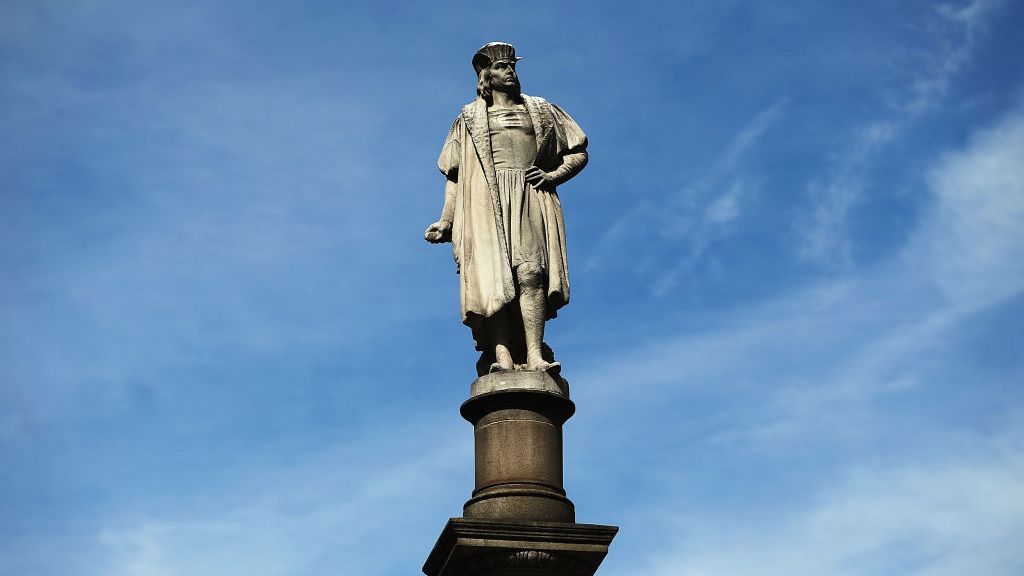 A 76-foot statue of Christopher Columbus stands in Columbus Circle on August 23, 2017, in New York City. Historians have long acknowledged that Columbus didn't discover North America, and a new study suggests he may even have been aware of North America before he ever set sail. (Spencer Platt/Getty Images)

Was Christopher Columbus really lost when he made his famed voyage to the New World in 1492? New analysis of a document from northern Italy, written in 1345, suggests Italian sailors were already aware of North America, as a land dubbed “Markland” by Leif Eriksson, according to Icelandic sources.

An unpublished document from 1345 suggests, according to Paolo Chiesa, an expert in medieval Latin literature at the University of Milan, that sailors from Genoa — Columbus’ hometown — were aware of “Markland,” or “Marckalada” in the Latin source. The area is now assumed to be one of the modern provinces of Labrador or Newfoundland in Canada.

Chiesa called the discovery of this passage in the antique document “astonishing.”

The document, “Cronica Universalis,” was penned by Galvaneus Flamma, a friar of the Dominican order who lived in Milan. “We are in the presence of the first reference to the American continent, albeit in an embryonic form, in the Mediterranean area,” said Chiesa, who published his analysis of the document in the journal Terrae Incognitae.

Flamma, who was connected to a prominent Milanese family, wrote several works in Latin and is a source of first-hand information about the times he lived in. Cronica Universalis, which is unfinished and may have been his last work, was intended to be a chronicle of world history.

Flamma had heard sailors’ stories about lands to the extreme northwest, which they had discovered when seeking fishing grounds and commercial opportunities. He even collected information about Greenland — where Norsemen had settled hundreds of years before — that was accurate for the time.

“These rumors were too vague to find consistency in cartographic or scholarly representations,” said Chiesa, which meant that Markland remained uncharted at the time. Chiesa said the document “brings unprecedented evidence to the speculation that news about the American continent, derived from Nordic sources, circulated in Italy one and [a] half centuries before Columbus” made his trip.

“What makes the passage [in Cronica Universalis] exceptional is its geographical provenance: not the Nordic area, as in the case of the other mentions, but northern Italy. The Marckalada described by Galvaneus is ‘rich in trees,’ not unlike the wooded Markland of the [Saga of the Greenlanders], and animals live there,” said Chiesa.

Details about animals and trees are standard descriptions of good land, according to Chiesa, but they are not trivial, especially as the far north is a “bleak and barren” landscape — just as Flamma describes the inaptly named Greenland. Cronica Universalis is trustworthy, Chiesa said, because Flamma declared the origin of oral accounts he included, linking them to local stories, whether real or legendary, from different lands that he blends and reassigns to a specific place.

“We have no evidence that Italian or Catalan seafarers ever reached Iceland or Greenland at that time,” Chiesa said of the 1300s, “but they were certainly able to acquire from northern European merchants goods of that origin to be transported to the Mediterranean area.”

He said of the oral accounts that “the Genoese might have brought back to their city scattered news about these lands — some real and some fanciful — that they heard in the northern harbors from Scottish, British, Danish [and] Norwegian sailors with whom they were trading.”

In Norse sagas, three lands are mentioned that experts believe are on the Atlantic coast of North America. Markland is the name given to one of these by Leif Eriksson around A.D. 1000, according to the “Saga of the Greenlanders.” The location of Markland was not recorded but was known to be southwest of Greenland and is believed to be the southernmost of the lands Eriksson found.

“I do not see any reason to disbelieve him,” Chiesa said of the friar Flamma. He noted that nautical charts of the 1300s that were drawn up in Genoa and Catalonia showed advanced geographical knowledge of the north, which would have been gathered by actual exploration.

“These notions about the northwest are likely to have come to Genoa through the shipping routes to the British Isles and to the continental coasts of the North Sea,” said Chiesa.

But even if Columbus had heard of the lands to the northwest, he ultimately made landfall in the Bahamas, far south of the shores the Nordic sources had described. He is still celebrated on Columbus Day in the United States, though some states and cities have in recent years declared the holiday Indigenous People’s Day, in protest of the European conquest of North America.