Droughts and heavy rains threaten 21.5 million people in Mexico City, reaching a point of no return. 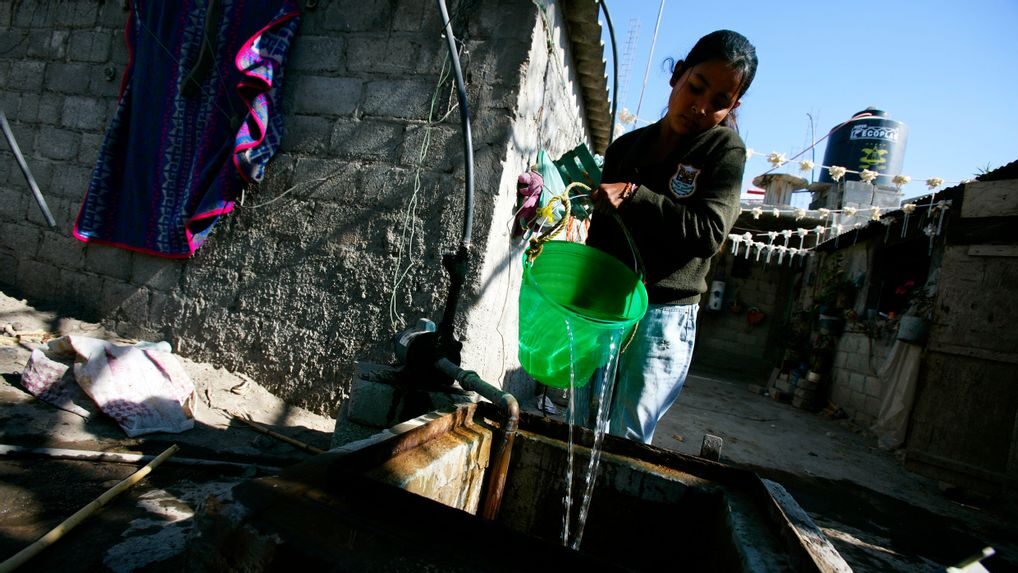 The Valley of Mexico has had water problems for a long time. The supply system does not cover the needs of the more than 20 million people living in the area, and droughts have worsened the issue. (Brent Stirton/Getty Images)

MEXICO CITY — Mexico City has a serious water-supply problem, one of the most severe challenges in the city’s history.

With more than 21.5 million people, it is one of the five most populated cities in the world, and the second-most-populated in the Americas, according to the United Nations.

The Valley of Mexico — which covers Mexico City, 60 municipalities in the State of Mexico, and one in Hidalgo — experienced an unprecedented drought in early April. The Cutzamala System, which supplies water to the area, operated at less than 50 percent of its capacity.

Mexico City Mayor Claudia Sheinbaum said on social media that it was the most intense drought the region had endured in the last 30 years.

“This is an emphatic call to take care of water. One always has to do it, but now it is more important than ever. This is not the time to water yards. It is not the time, under any circumstances, to use extra water,” Sheinbaum said.

The State of Mexico’s municipalities of Tlalnepantla, Huixquilucan, Naucalpan and Ecatepec, and several within Mexico City, had heavy rains that seriously damaged the local infrastructure. The rain flooded the sewer system around Atizapán de Zaragoza’s General Hospital Dr. Salvador González Herrejón, and 67 patients had to be referred to other units.

Researcher Norma Olvera, from the Institute of Atmospheric Sciences and Climate Change at Mexico’s National Autonomous University, said the Valley of Mexico uses enough water daily to fill 108 Olympic pools. But after 30 minutes of rain on June 22, the water that fell in the areas of Huixquilucan, Naucalpan and Tlalnepantla exceeded the figure by 8 percent. The region could have filled 185 Olympic pools.

Mexico City was built on a lake, which makes it prone to floods, said Carlos Gay-García, a researcher at the Institute of Atmospheric Sciences and Climate Change. He attributes the sudden changes in weather patterns to global warming and believes they will become repetitive, putting the region’s water supply at risk.

“Mexico City’s [environmental] problems are going to become more intense. We are going to have more droughts paired with floods, which is what climate models tell us. We are reaching a point of no return,” Gay-García told Zenger.

“We won’t be able to go back to the condition we had before the phenomenon. That is what is called residual impact. If we cannot recover from the floods in Ecatepec or Tlalnepantla, we will be living with a deficit, and the next phenomenon will have worse consequences,” Gay-García said.

But climate change is not the only challenge facing Mexico City. Insufficient drinking water supply, over-exploitation of water sources, well contamination, change in land use, pollution of water bodies, urban expansion and insufficient sewer leave the city vulnerable to droughts and floods.

In addition, the city is sinking. Continuous water extraction from the aquifers has led to subsidence, land sinking, which makes the area even more vulnerable. Some parts of the city “have reached a 39-foot subsidence,” Olvera said.

“We know through the ground [composition] that we have water underneath,” Olvera said, explaining as the ground sinks, water undergoes a salinization process. “In the Iztapalapa area, for example, a process of contamination by salinization is taking place. Water has poor quality.”

The Tuxpan and El Bosque dams in Michoacán; the Colorines, Ixtapan del Oro, Valle de Bravo, Villa Victoria and Chilesdo dams in the State of Mexico, and the upper basin of the Cutzamala river are part of the Cutzamala System. It provides 22.5 percent of the Valley of Mexico’s water. Despite the heavy rains, the system has had only a slight increase in water abstraction, and its level remains low compared to previous years.

According to Mexico’s National Water Commission, as of Sept. 16, 2021, it stored 371,874 acre-feet of water, which is equivalent to 58.6 percent of its capacity. Part of the basin area is suffering a drought — and the rain has not helped offset the loss.

“The current level is one of the lowest the Cutzamala has had in reliable records from 1996 to date. We are 19.4 percent below the historical average as of the same date, which is 494,500 acre-feet,” the Cuenca Aguas del Valle de México Agency’s Director-General Víctor Bourguett told Zenger.

The system was providing around 0.0128 acre-feet of water per second in early 2020. However, the dry season and the water demand — due to increased hygiene measures related to the pandemic — led authorities to reduce the supply to 0.0124 and later to 0.01143 acre-feet. During a maintenance process, it reached 0.0073, remaining at 0.01062, which could last until the end of 2021.

“The alerts are set, which is why we have lowered the supply. We have a team dedicated to making hydrological analyses supported by the national meteorological system,” said Bourguett. “We are constantly reviewing them and making projections to estimate the amount of water we will deliver in the coming months and years. We will make a decision when the hydrological year ends on Oct. 30.”

“We cannot bring water from the Cutzamala, use it and throw it away. That water is misused; we should recycle it five or six times. Water is unsustainable because we have to bring it from 93 miles away, pump it uphill 7,200 feet [Mexico City’s altitude] and deliver it into the city. We could use it to produce energy with mini-electric [dams]. There have been many projects that have been put aside,” Gay-Garcia said.

“Like in any other city of the world, infrastructure and operation costs raise the price of water in the Valley of Mexico. While some neighborhoods and municipalities have good service, others have suffered [shortages] throughout their history,” said Bourguett.

“Any drop we save in areas with good service helps areas with poor service. We have to make the most of it, avoid wasting it, and make rational and efficient use of it.”