With Stunning Comeback, Tyson Fury Completes Trilogy By Proving He Is Lord Of The Ring 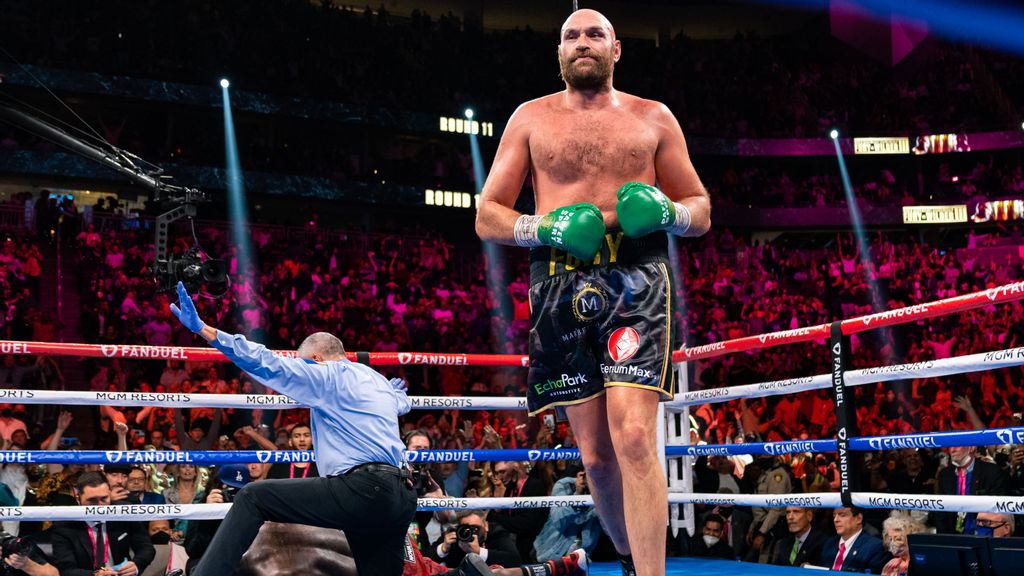 Tyson Fury delivered on his promise to give Deontay Wilder a beatdown during Saturday’s five-knockdown slugfest.

But “The Gypsy King” had to rise from the canvas twice in the fourth round and drop “The Bronze Bomber” on three other occasions to complete an 11th-round TKO victory in defense of his WBC heavyweight crown before 15,820 fans at T-Mobile Arena in Las Vegas.

Wilder lay on his left side at the 1:10 mark as referee Russell Mora indicated a victory for Fury, who rose from ninth- and 12th-round knockdowns during a December 2018 draw with Wilder before dethroning him via two-knockdown, seventh-round TKO in their February 2020 rematch.

Fury’s head- and body-swiveling right hand ended the night for Wilder, who was still on his way to the canvas as Mora signaled the conclusion of a trilogy that featured a combined nine knockdowns — five by Fury and four by Wilder.

“I hit him solid with a crunching right to the temple, and shots like that end careers,” said Fury, who led, 94–92, 95–92 and 95–91 on the three judges’ cards. “[Wilder] took a lot of punishment tonight from left uppercuts, left hooks and right hands. We’ll see what he can do in the future. I just hope that he’s okay.”

Fury, 33, rushed to a corner of the ring, stood on the ropes and triumphantly thrust his gloved fists overhead in celebration.

“It was a great fight tonight worthy of any trilogy in the history of the sport. I was down a couple of times, and I was hurt because Wilder’s a strong puncher and a tough man,” said Fury, whose career-high 277 pounds countered Wilder’s career-high 238.

“But my legs are strong. Wilder is a tough man because I was hitting him with some big shots tonight. I’ve always said I’m the best in the world, and he’s the second-best. I’m the WBC champ and the lineal champion.”

“My uncle Emanuel’s blood is in me, and tonight, he was a part of me, part of Tyson, part of Wilder, and that’s what this was all about,” Hill-Steward told Zenger within an hour of the fight’s ending.

“For Tyson Fury to rise from a combined four knockdowns against one of the hardest punchers in the heavyweight division’s history in Deontay Wilder, and to come back from those and pull off the big knockouts in back-to-back fights shows that Tyson Fury is a big-time fighter.”

Wilder had recorded seven straight knockouts entering his first fight with Fury and hoped to regain the crown he earned on Muhammad Ali’s 73rd birthday by dethroning Bermane Stiverne via unanimous decision on Jan. 17, 2015.

Wilder, who became America’s first heavyweight titleholder since Shannon Briggs in 2007, is 10–2–1 (9 KOs) in title fights, 9–0–1 (9 KOs) in 10 consecutive defenses and has knocked down or stopped every man he has faced as a professional.

“The Bronze Bomber’s” 10 defenses are tied with Ali for fifth all-time among heavyweights behind Joe Louis (26), Larry Holmes (19), Wladimir Klitschko (18) and Tommy Burns (13). Mike Tyson is seventh with nine defenses.

Ali served as motivation for Wilder against Fury, having become a two-time heavyweight champion on Oct. 30, 1974, with an upset, eighth-round knockout of previously unbeaten George Foreman.

“I did my best, but it wasn’t good enough. I’m not sure what happened,” said a swollen-eyed, bloody-lipped Wilder, who turns 36 on Oct. 22. “I know that in training he [Fury] did certain things, and I also knew that he didn’t come in at 277 to be a ballet dancer. He came to lean on me, try to rough me up, and he succeeded.”

Fury was losing the third round before scoring the first knockdown with 38 seconds remaining with a three-punch combination.

After chasing Wilder to the ropes, Fury staggered him with an overhand right to his left temple, then sent him to the canvas with a right-uppercut, left-uppercut combo, the latter to Wilder’s right temple.

“I was one punch away from knocking him out the entire fight,” Fury said. “But Wilder kept getting up.”

Wilder fired back in the fourth, his powerful right hands dropping Fury twice within the final 57 seconds.

Fury walked into and absorbed the brunt of the first blow in the middle of his face with 57 seconds left, spiraling to the canvas in a delayed reaction before rising at the count of seven.

Another right to the top of the head with 15 seconds left once again dropped Fury, who was on his feet with six seconds remaining. Fury managed to beat Mora’s count and survive the bell ending the round.

“I want to say that if it wasn’t for ‘Sugar’ Hill, America and Detroit’s own, I wouldn’t have gotten through that fight tonight,” Fury said. “He said, ‘Get your jab working, big dog, and shoot that right hand down the middle. That’s how the big dogs do it.’”

Fury sent Wilder to his hands and knees at the 1:20 mark of the 10th round, a short overhand right to the temple doing the damage before Wilder valiantly reached his feet again to survive into the 11th.

“It was that final right hand to the head that finished him. I showed initiative, dug deeper and wanted it more. I wasn’t willing to let it go to the scorecards,” Fury said.

“I was definitely trying for a knockout. I pulled it out of the bag when it needed to be done. This was one of my greatest wins, and I’ve gotten off the floor to do it.”

The WBC recently declared that Fury has 30 days to complete unification talks with Usyk, if not the winner of an Oct. 30 clash between the organization’s interim titleholder Dillian Whyte (28–2, 19 KOs) and southpaw Otto Wallin (22–1, 14 KOs).

In the meantime, Joshua, a 2012 Olympic Gold medalist at super heavyweight, has exercised the rematch clause in his contract with Usyk. Their return bout could happen in early spring 2022.

“Before I start thinking about fighting other men, I’m going to bask in this victory,” said Fury, a married father of six. “I’ve been away from my family for six months. I’ve just earned a break from everything.”

The Wilder trilogy helped to rescue Fury from depression and anxiety so debilitating that “The Gypsy King” had once lost his desire to live.

Fury felt little validation in November 2015 from his career-defining unanimous decision over long-reigning Wladimir Klitschko, a feat that ended 6-foot-6 “Dr. Steelhammer’s” dominance at 22–0 (15 KOs) and 11 and a half years and made Fury the IBF/WBA/WBO/IBO champion.

Fury turned to alcohol and drugs, his weight ballooning to 400 pounds, and failed to satisfy mandatory defenses. He tested positive for banned substances, which ultimately led to the suspension of his boxing license in October 2016 by the British Boxing Board of Control.

Fury, who was diagnosed with bipolar disorder in October 2017, returned to the ring in 2018 with a pair of victories — a fourth-round stoppage of Sefer Seferi (June) and a 10-round unanimous decision over Francesco Pianeta (August).

In August, Fury’s wife, Paris, had their sixth child, Athena, who remained hospitalized on a ventilator and in intensive care with health complications before making a full recovery in advance of her father’s return to training for Wilder.

“Big shout out to my dad, my mom, and my kids all watching. Thank you to my wife, Paris, I love you so much,” said Fury, whose wife was in the ring for his postfight interview.

“I hope Oct. 9, 2021 will go down in history as one of the greatest fights,” Fury added. “Don’t ever doubt me, because I can never be written off or beaten. I’m never down and out, because when the chips are down, I can always deliver.”