Determined Brazilian woman returns to the sport with a successful jump in September. 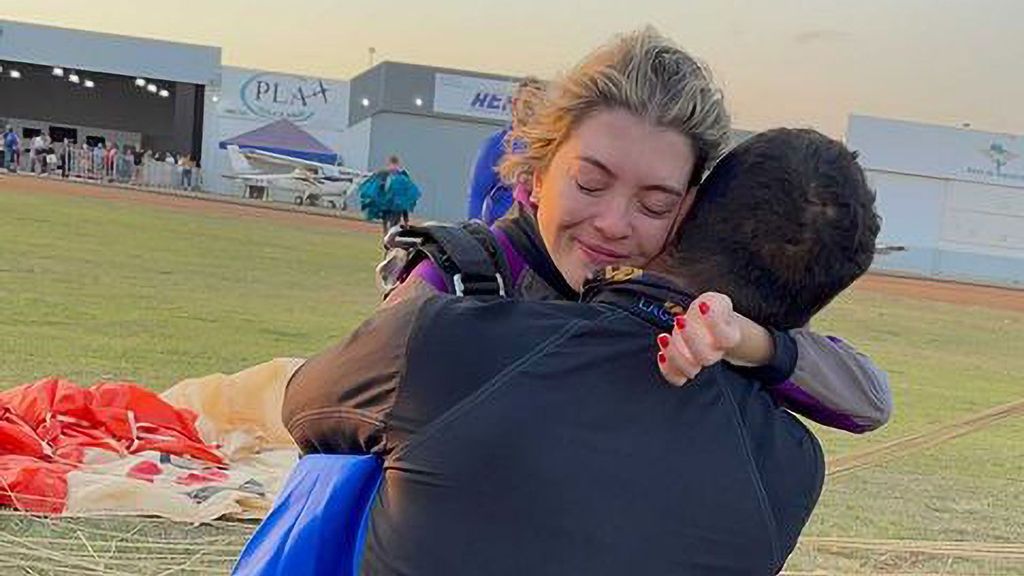 Brazilian skydiver Raquel Zendron with her husband Jefferson Lages after a successful jump as a quadriplegic. (Raquel Zendron/Zenger).

A skydiver who was left quadriplegic following an operation has recovered some of her movement and has shown her resiliency as she again takes up her sport.

Raquel Zendron did her first jump with an instructor in Anapolis, Brazil, when she was 19 years old — 15 years ago.

It was on her second jump in October 2017 that she met the man she would eventually marry, Jefferson Lages. She describes him as “the great love of my life.”

Two years later, however, her life as she had known it was turned upside down.

“After experiencing severe pain in mid-October 2019 and losing strength in my left arm, it was found I had a slipped disc,” Zendron, a banker, said. “I needed to undergo surgery in February 2020, and post-op I was left without any movement.

“At first it was really nerve-racking, as the diagnosis was not good and all my dreams were falling apart overnight. It was supposed to be a simple operation, but when I got out, I couldn’t move anymore. I never imagined this could happen.

“I can’t explain my reaction. I remember thinking crying wasn’t going to solve it. I thought ‘from now on, I will do the best I can to recover’. From then on, I focussed all my strength on what I had and not on what I didn’t have.”

Her recovery went better than expected, and she regained some movement following several physiotherapy sessions.

“I’ve seen a considerable improvement in my arm movements, and I’m also able to balance my torso with support,” she said.

She had a nerve graft on both arms in February this year, which further improved the movement in her arms.

“I was always nurturing my strength, thinking positively, valuing all the good things around me,” she said. “I feel very privileged because I have a family that supports me unconditionally and a husband who has never allowed me to give up.”

On Sept. 29, Zendron had her first skydive since her misfortune.

Video shows a happy Zendron as her husband carries her into the aircraft and she successfully completes the jump with an instructor.

“This leap was a fresh start,” she told Zenger. “We intend to continue jumping from time to time, and we will adapt what is necessary to make our dreams come true.

“We continue to go on with life. There are no easy days, but with love and willpower we will make everything brighter, and we won’t let ourselves be affected.”