The 4,000-year-old sword was discovered by an amateur archeologist with a metal detector in his parents’ garden. 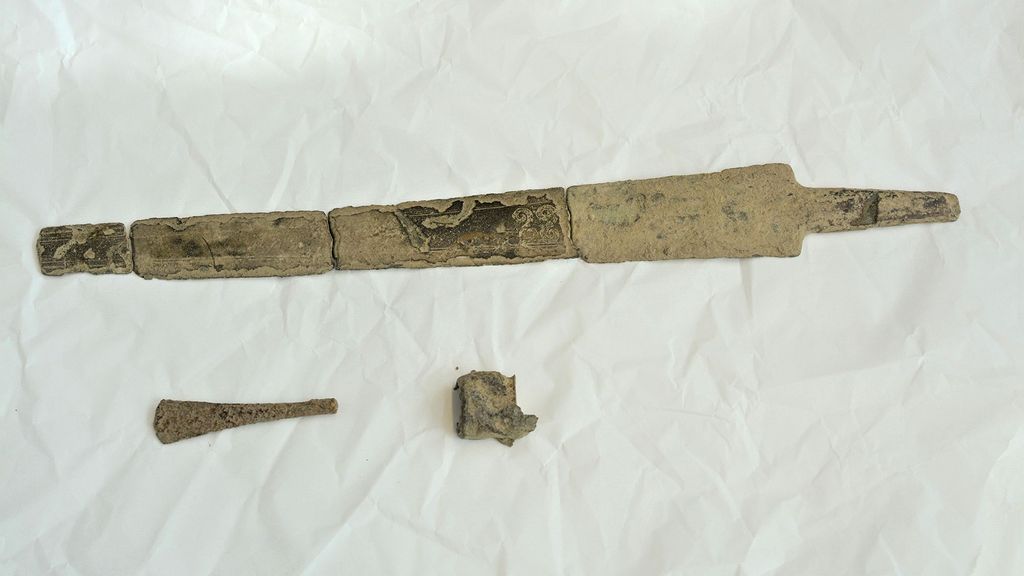 Pieces of a sword believed to be from the Bronze Age were found by Matti Rintamaa in his parent's yard with the help of a metal detector in the Finnish village of Panelia. (Sami Raninen, Finnish Heritage Agency/Zenger)

A Bronze Age sword dating back as far as 1700 B.C. was found broken in pieces in Finland this past summer by a man using a metal detector in his parents’ back garden.

The July discovery in the village of Panella in southwestern Finland was only made public recently by the Satakunta Museum and the Finnish Heritage Agency.

Matti Rintamaa had bought his first metal detector only two weeks before the sword find. When scanning his parents’ backyard, he found a few small pieces of metal a couple of inches long. Then he found a longer piece and showed a picture of it to an experienced metal-detecting friend.

Finland’s National Board of Antiquities was called, and an archeologist sent to the site uncovered more pieces of the sword.

The Satakunta Museum said in a statement that such discoveries are very rare as “less than 200 Bronze Age bronze objects” have been found in Finland. ”A total of about 25 swords or daggers belonging to the period have been found, two of which were found in Panelia,” the statement said.

“We believe that the sword was a stray find. It was probably originally placed in shallow water,” said Satakunta Museum archeologist Leena Koivisto.  “As the sea gradually retreated, the former bay changed to marshland and finally into field. The sword was covered with layers of peat.”

Archeologists believe the sword was moved from its original location during construction work.

Sami Raninen, a photographer and curator at the Finnish Heritage Agency, pointed out the apparently solar symbol that can be faintly seen on the weapon.

“Prestigious artifacts were sometimes deposited in ground or in water. Presumably, this was an attempt to please or conciliate chthonic gods.” he said. “At the same time, there are some suggestions of a sun cult. … The Spirals are interpreted as symbols of solar divinities, and the sun cult was an important part of the Scandinavian Bronze Age religion. Perhaps there was some kind of association between the glimmering bronze and sunlight.”

Information about the period in the area is scarce. Scholars tend to concur that many of the belief systems would have been similar to those of Ancient Greece, with polytheistic cults forming the basis of what would become Norse mythology.

“But why a weapon engraved with a solar symbol was laid in a less-than-sunny domain of seawater? I don’t know, but I think the act must have resonated with mythological and cosmological beliefs of the local Bronze Age community,” Raninen said.

The sword is currently in Helsinki and cataloged in the archeological collections of the Finnish National Museum. Fundraising efforts have been launched to cover conservation costs with the aim of displaying the sword in a regional museum.