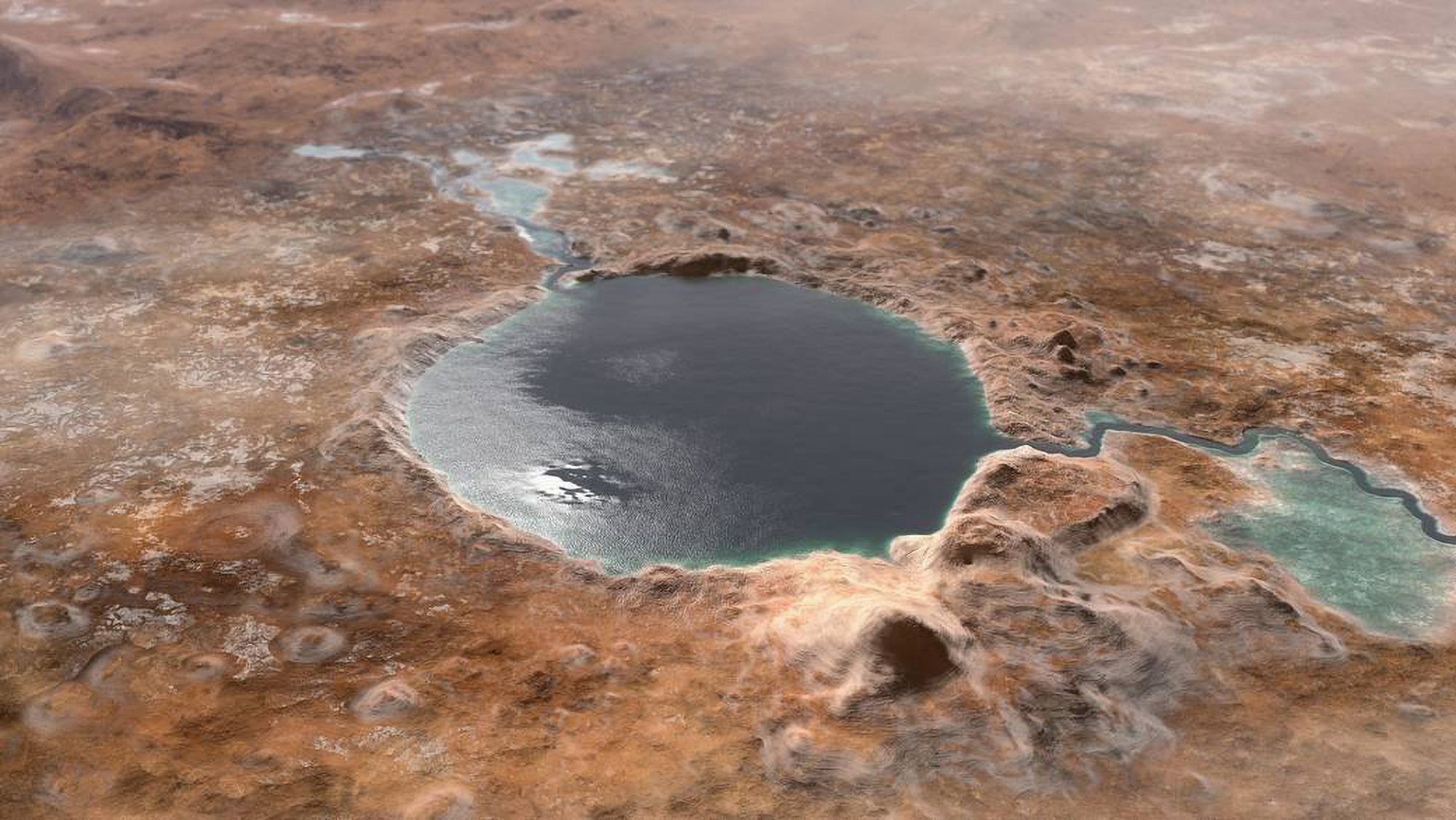 An illustration of Jezero crater as a lake. (NASA, JPL-Caltech/Zenger)

NASA said in a statement that the new images at Jezero Crater will offer insight into how liquid water helped shape the Martian surface billions of years ago.

An analysis of the high-resolution images was published in the journal Science.

The rover landed on Feb. 18 and has since been exploring the ancient lake and its surroundings, looking for evidence of liquid water.

NASA said the most recent images “reveal that billions of years ago, when Mars had an atmosphere thick enough to support water flowing across its surface, Jezero’s fan-shaped river delta experienced late-stage flooding events.”

These floods are believed to have carried rocks and debris into the delta from the highlands located well outside the crater.

The floods created long, steep slopes known as scarps, which are marked in the images analyzed in the study.

“We saw distinct layers in the scarps containing boulders up to 5 feet (1.5 meters) across that we knew had no business being there,” said Nicolas Mangold, a Perseverance scientist and lead author of the paper.

A slow-moving waterway that fed into the delta must have been transformed by fast-moving floods, said Mangold.

The researchers estimated that a torrent of water needed to transport the boulders would have to travel at speeds ranging from 4 to 26 mph (6 to 30 kph).

The rover team has long planned to visit the delta because of its potential for harboring signs of ancient microbial life.

“Never before has such well-preserved stratigraphy been visible on Mars,” said Mangold. “This is the key observation that enables us to once and for all confirm the presence of a lake and river delta at Jezero. Getting a better understanding of the hydrology months in advance of our arrival at the delta is going to pay big dividends down the road.”

“A better understanding of Jezero’s delta is key to understanding the change in hydrology for the area,” said Sanjeev Gupta, a Perseverance scientist from Imperial College London and co-author of the paper.

He added that the information provides “valuable insights” into why the entire planet dried out.

The rover’s mission is expected to continue for over a decade, and at some point in 2030, it will be sent back to Earth carrying 30 rock and soil samples in sealed tubes that will then be analyzed.

Amy Williams, a NASA astrobiologist, described the opportunity to witness the discovery of a Martian river system as “eye-opening.” She added that finding clear proof that Mars once harbored life would be one of the most “profound” scientific discoveries ever made.