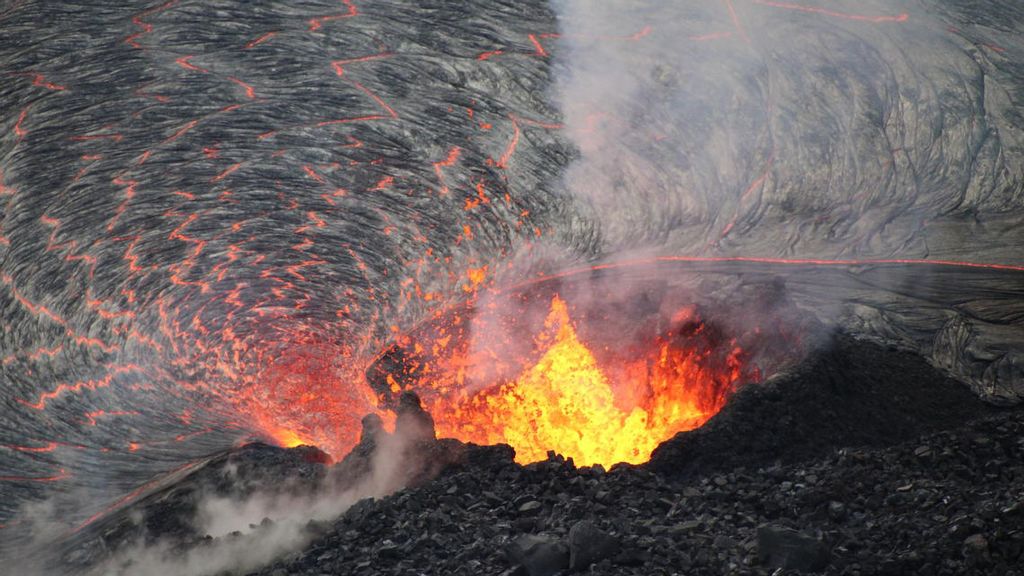 Fountaining from the western vent in Halemaʻumaʻu's crater, at the summit of Kīlauea. Spatter from the fountain continues to build up a horseshoe-shaped cone around the vent, with lava flowing into the lake at its base on Hawaii's Big Island on Oct. 5. (USGS N. Deligne/Zenger)

The Kīlauea volcano continues to put on quite a show as its latest eruption on Hawaii’s Big Island enters its second week.

“Gas emissions and seismic activity at the summit remain elevated,” the United States Geological Survey said in an Oct. 6 posting on its website. “The western vent remains the dominant source of fountaining. One fountain remains active in the south portion of the lake. The silver-gray lava comes from the western vent, and the dark black lava comes from the south fountain.”

They also shared the footage showing the Kīlauea eruption continuing, with a large lava fountain visible in the Halemaʻumaʻu crater’s western vent that was filmed Oct. 4.

“Kīlauea volcano is erupting lava into a deepening lava lake filling Halema‘uma‘u crater,” the agency said. “This video shows the dominant fountain at the west vent from two different angles and the smaller fountaining source emerging through the lava lake.”

Though mostly not as spectacular as the images released during that initial eruption, more recent footage reflects the volcano’s ongoing activity. For example, Hawaii Volcanoes NPS (National Park Service) released on Twitter a time-lapse sequence of the increasing volcanic activity, with the smoke leaving the volcano becoming thicker and more abundant.

Kīlauea is a highly active shield volcano — so called because its lava flows have broad sloping sides and are generally surrounded by gently sloping hills in a circular or fan-shaped pattern that looks like a warrior’s shield — that is believed to be between 210,000 and 280,000 years old, emerging from the sea about 100,000 years ago.

Its last major eruption started in May 2018 and ended in September that year, resulting in thousands of local residents being displaced and the destruction of 716 homes.

The 2018 eruption included lava oozing from 24 different vents with one major explosion sending debris flying 30,000 feet (9,100 meters) into the sky.

Currently, several vents are oozing lava from the volcano, but the local authorities have not closed the national park it’s located in to tourists.

“We continue to work with USGS scientists to receive the latest volcanic updates, and remind visitors that the eruptive activity and accessibility could change at any time,” the park service said in a statement.