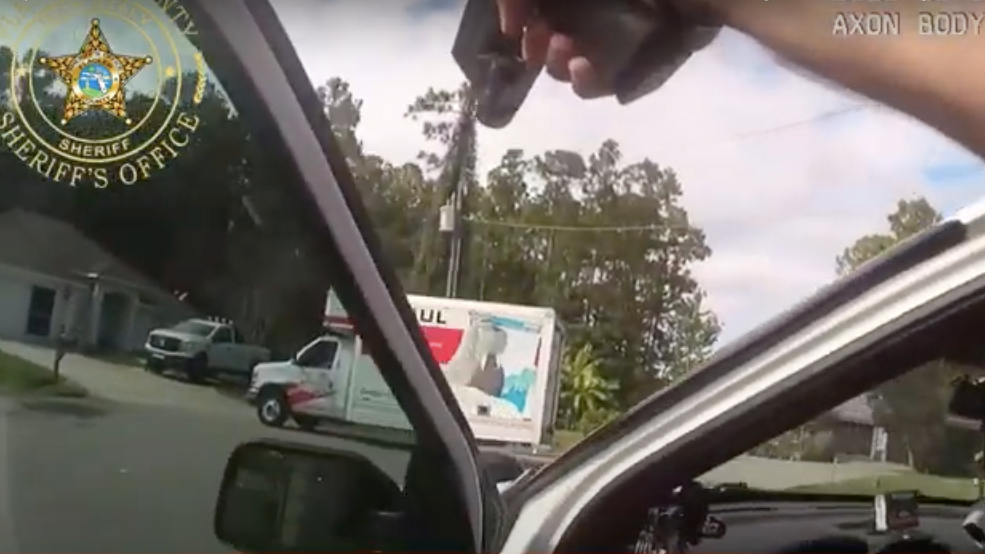 Sheriff's deputies in Flagler County, Florida, pulled over a stolen U-Haul truck that was subsequently found to contain illegal drugs on Oct. 4, 2021. The driver and passenger of the rental were arrested. (Flagler County Sheriff’s Office/Zenger)

Sheriff’s deputies in southeast Florida pulled over a stolen U-Haul truck that was subsequently found to contain small amounts of hallucinogenic mushrooms, methamphetamine and cocaine. The driver and passenger of the rental — who both have police records for drug possession and committing violent acts — were arrested.

The incident began on Oct. 4, when the Flagler County Sheriff’s Office received what it described as a “Be-On-the-Look Out” advisory for a 2017 Ford Econoline U-Haul box truck that was reported stolen in Volusia County earlier in the day.

Flagler officers spotted the van and undertook what the department described as a high-risk traffic stop. Video released by the department begins with a deputy brandishing his weapon and telling the occupants of the parked rental vehicle to exit and put their arms up. After displaying some reluctance to follow those orders, the two men on board complied.

Deputies then identified the driver of the vehicle as John Pozzuoli and the passenger as Gregory Goreham.

“Upon questioning, Pozzuoli told FCSO deputies that he had drugs in the vehicle,” said a statement released by the sheriff’s office. “Pozzuoli also stated that he rented the truck online through U-Haul, and he picked up the keys after hours from a lockbox in Ormond Beach.

“He also claimed he had proof of the rent on his phone but could not locate it. Goreham stated that he wasn’t there for the truck pick-up. He stated that Pozzuoli had just picked him up a little before they were stopped by FCSO deputies.”

Deputies conducted a search on the vehicle and found a small baggy of crystal-like substance that was field tested and found to be methamphetamines weighing 0.18 grams (0.006 ounces). In addition, a box of hallucinogenic mushrooms weighing 5.57 grams (0.2 ounces) was also located inside the vehicle. Finally, when deputies opened a pack of cigarettes they located a dollar bill folded over that contained a white powdery substance finding approximately 0.65 grams (about 0.02 ounces) of cocaine.”

“This is a great example of technology combined with good police work keeps our community safe and serial offenders in jail,” said Sheriff Rick Staly. “If you are driving in Flagler County with drugs and a stolen vehicle we will find you, and you will spend time at the Green Roof Inn [the county jail]. There is no room for criminals in Flagler County, unless it is at the Green Roof Inn.”

The statement said both suspects were jailed and face drug-possession charges.