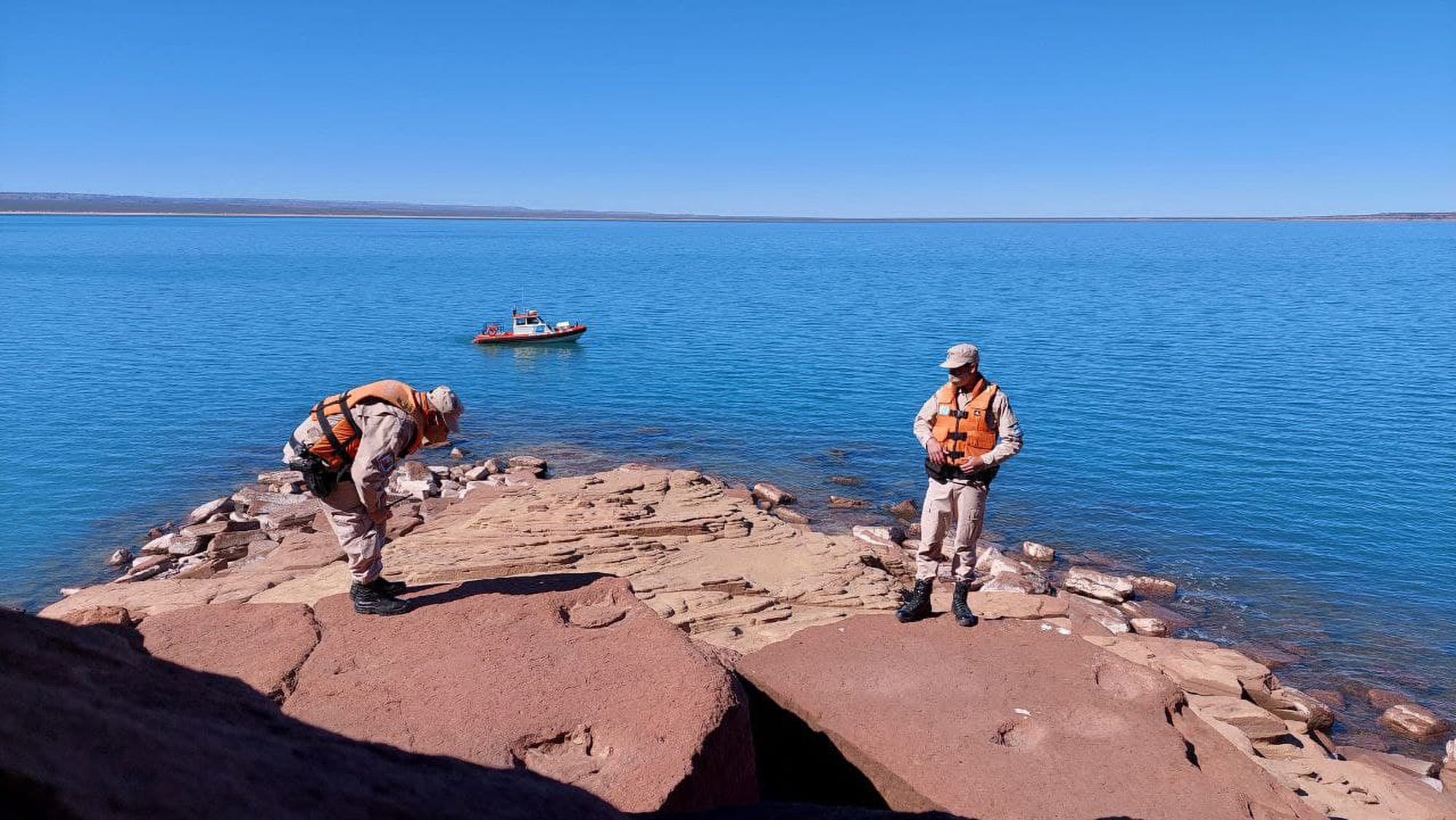 Officers patrolling the Ezequiel Ramos Mexia Reservoir on the Argentinean side of Patagonia found the prehistoric footprints of a bipedal dinosaur that lived in the area. (Argentine Naval Prefecture/Zenger)

Argentine security forces have discovered 13 large dinosaur footprints, belonging to a carnivorous species with claws, in a 100-million-year-old rock formation in Patagonia, at the southern tip of South America.

The officers from the Argentina Naval Prefecture, a police force that operates as a coast guard and river protection service, were patrolling the Ezequiel Ramos Mexia Reservoir on the Argentinean side of Patagonia, which is divided from the Chilean side by the Andes Mountains, when they made the discovery.

“While conducting a patrol to provide security in the area, the team spotted 13 footprints on a rocky terrain and some fallen rocks, located about four kilometers [2.48 miles] from the area known as ‘Los Gigantes,’” the naval prefecture said in a statement.

Scientists have dated the footprints back to the Late Cretaceous period, which ran from 100 million years ago to 66 million years ago, ending with the mass extinction of the dinosaurs. They have not identified the exact species of dinosaur the footprints belong to, but the Late Cretaceous period saw the Tyrannosaurus rex and Triceratops roam the Earth.

In its statement, the naval prefecture noted that the rock-bearing levels where the discovery was made are part of the Candeleros Formation, a geological formation composed mostly of sandstone deposited by an ancient river system. The formation is approximately 100 million years old and is rich in dinosaur footprints and various kinds of fossils.

Scientists at the Paleontological Laboratory of the Ernesto Bachmann Municipal Paleontological, Archaeological and Historical Museum analyzed the images and said the footprints were made by “a bipedal dinosaur of medium-large size.” Bipedal animals walk on two legs. The research team confirmed the dinosaur was a tridactyl — meaning each foot has three toes — but the species remains unknown.

Meanwhile, researchers at the National University of Rio Negro reported that the footprints measured between 11.8 and 19.6 inches (30–50 centimeters) and the three elongated toes had pointed ends. This suggests, according to the scientists, that the footprints belong to a theropod dinosaur — a bipedal carnivore, potentially with claws — that would have measured between 3.9 and 4.9 feet (1.2–1.5 meters) in height.

The discovery is similar to a previous finding in the area in the same month last year. The footprints found on the shore of the reservoir were also those of a bipedal tridactyl, but studies to confirm the species of the dinosaur that left them are still underway.

«Previous Post
Elephant-Sized Prehistoric Sloth Was A Meat Eater, Unlike Veggie Descendants»Next Post
A Bug’s Strife: How Dragonflies Fly Across 1,000 Miles Of Open Ocean To Lay Their Eggs