Researchers face a crisis, due to budget cuts and accusations of privilege. 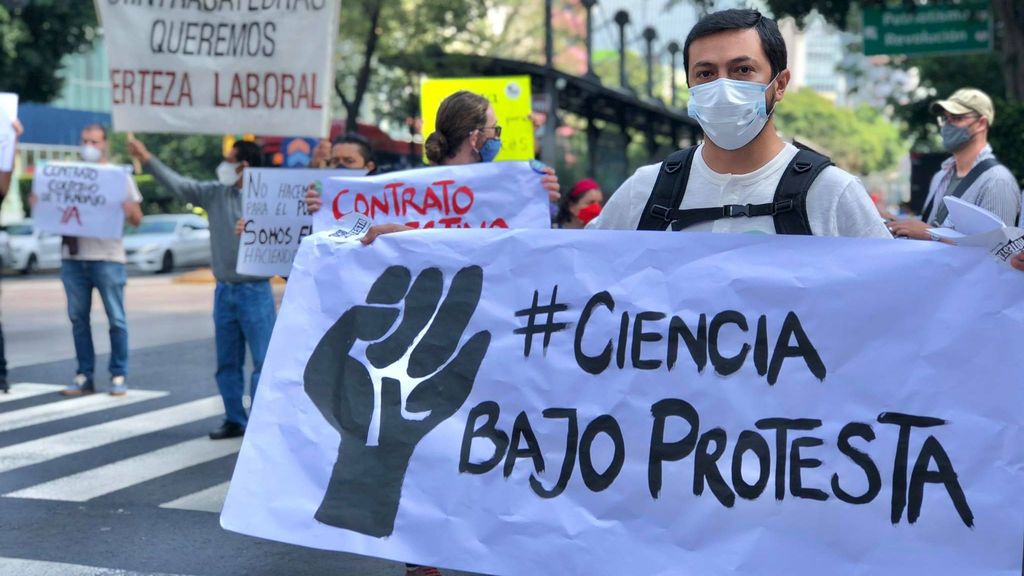 Members of the Siintracatedras union demonstrate outside Conacyt's facilities in Mexico City. The government seeks to cut the jobs of scientists conducting research at universities. (Julio Guzmán/Zenger).

MEXICO CITY — Scholars in Mexico are concerned for their future.

The primary public body in charge of financing, promoting and disseminating science in academia in Mexico is going through a series of changes.

The National Council of Science and Technology (Conacyt) has been facing a period of uncertainty.

On Sept. 30, scientists and researchers belonging to the Independent Union of Workers and Researchers of Conacyt’s Chairs (Siintracatedras) gathered in front of the Council’s facilities in Mexico City and several states. They protested Conacyt’s refusal to sign a collective bargaining agreement and the Federal Conciliation and Arbitration Board’s — the government body that mediates in labor disputes — refusal to allow their strike.

“We are taking legal action; we are going to file an amparo claiming they deny us our labor and union rights. … Without labor certainty, science does not work well. To carry out science continuously, we need job certainty because science requires social commitments and longtime investments,”’ the General Secretary of Siintracatedras, Mateo Mier y Terán Giménez Cacho, told Zenger.

The problem stems from the Chair Program’s Researchers for Mexico, which has hired national and international researchers from different scientific fields and assigned them to public agencies, universities and research centers since 2014. The program arose from the need to open spaces to conduct academic research in the country.

However, being a member of the program has its challenges.

Conacyt and the universities and public research centers involved evaluate them periodically. Since President Andrés Manuel López Obrador appointed María Elena Álvarez-Buylla as the council’s director, some claim unjustified dismissals have increased, and they are usually “subjective” decisions.

“As an exempt employee, you can be fired at any time,” Siintracatedras Secretary Perla Fragoso Lugo told Zenger.

“Conacyt justifies dismissals through annual evaluations, but these evaluations do not follow any academic criteria. It is the project coordinator who evaluates you, and there is often a power dynamic that gets in the way if you think differently from them,” she said.

“There have also been cases of sexual abuse and workplace harassment toward colleagues. If you report it, the authorities will most likely believe the project coordinator and fire you,” she said.

Since its inception in 2019, Siintracatedras has sought to sign a collective bargaining agreement that protects researchers from labor vulnerability. Over 300 of the more than 1,276 members of the Chair Program have joined the union.

After several meetings with the union, Conacyt has not signed the agreement. The problem got worse when the council changed the evaluation criteria for researchers in the Statute of Academic Staff, published on June 29, 2021. One of the changes establishes that to keep a researcher in the program, Conacyt will consider “their labor insertion in the receiving institution or any other.”

In response, scientists and researchers launched a campaign on social media. They exposed the council’s new policy under the hashtag #Buscotrabajo (I’m looking for a job).

“We wanted to point out how absurd it is for me as a scholar to prove that I am looking for work somewhere else to pass my annual evaluation,” said Edgar Guerra, a doctor in sociology attached to the Drug Policy Research Program at the Center for Economic Research and Teaching (CIDE) and a member of the union.

On Sept. 29, Conacyt stated in a press release that Siintracatedras’ strike was inappropriate and that it considered the issue fully resolved.

“The 11th Special Board considered that the strike summons and the signing of a collective bargaining agreement are inadmissible. Conacyt labor practices abide by Article 123, section B of the Mexican Constitution, and it already has the General Labor Conditions [a legal document], which acts as a collective agreement. As a decentralized public body, Conacyt does not have the power to arrange benefit payment within a collective bargaining agreement,” reads the statement.

Conacyt’s next evaluation was scheduled for September, but it is likely to happen in October. Researchers fear that many may lose their jobs. Between 2015 and 2020, 51 scientists were fired from the project, 44 of whom lost their positions in 2019 and 2020.

The scientific and research community has launched the #CienciaBajoProtesta [science under protest] campaign, which invites society to participate in sessions where scientists present their projects to the public. Arguing abuse and corruption, López Obrador ordered a 75 percent budget cut for public administration spending in May 2020, affecting Conacyt and several research centers.

“We explained to him that the money is an investment — and it is a myth that investing in science is a privilege. We conduct research to prevent femicide, better use alternative energies, protect the environment and preserve insects, flora and fauna. It pays off to keep investing. Mexican society has paid for our education, and now, Conacyt says that it cannot invest in giving continuity to projects as important as the ones we are working on,” said Fragoso Lugo.

“I earned master’s … and doctoral degrees thanks to Conacyt grants. The same research professors that Conacyt has trained over many years are now in complete uncertainty,” he said.

“We are not dissatisfied with the tasks and research that we carry out. We want to continue working as scholars,” he said, explaining they would like to establish a more formal relationship with Conacyt.

“We are just seeking stability and certainty, what a collective-bargaining agreement states. We want to continue being, with great pride, Conacyt scholars,” he said.